With the successful completion of a cell of Hydra terrorists, some heroes were desperately needed to prevent their nefarious schemes for world domination. So, like a one-eyed super-spy, I set about assembling the Avengers! 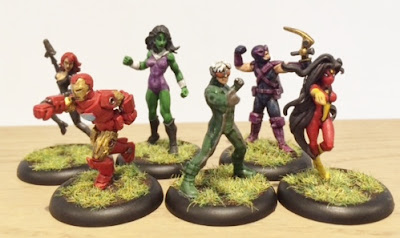 Enter Iron Man, Hawkeye, Black Widow, She-Hulk, Spider-Woman and...erm...Speed. Admittedly, it's not exactly the line-up from the movies, but my Avengers do all have pedigree as part of the team (or in one case, the Young Avengers). 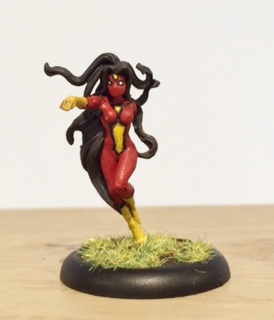 My Spider-Woman is made from a Reaper Miniature from their Chronoscope line. The model makes for a good unofficial Spider-Woman model, although she shouldn't have her mouth covered, and probably has too much hair, but I like it. I'm quite pleased with the black and yellow detailing I've done on the suit. There's also plenty of gaming potential with this model as Spider-Woman has actually been a SHIELD-HYDRA triple agent, whilst at the same time being a Skrull infiltrator. 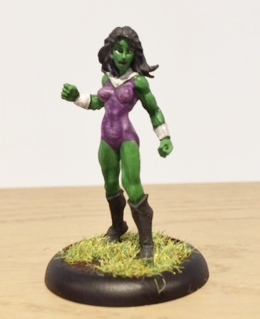 She-Hulk is another Reaper Chronoscope miniature, made from the appropriately named 'Incredible Woman'. Her costume is not exactly right, but I didn't want to use too much white on the model, so I kept it to her collar and cuffs...ahem...

On a separate note, this model stands significantly taller than most 28mm miniatures, and so would scale well with KM's 35mm miniatures and would be usable as a who range of female heroes and villans for whole their aren't currently models in BMG or SMG. 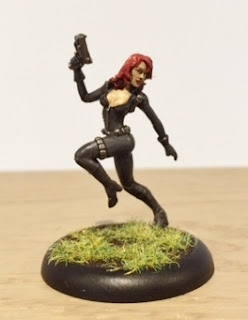 Black Widow, is my third Reaper figure. This one is Natalia, female secret agent - you'd be forgiven for thinking that Reaper have deliberately based this miniature on Black Widow, whose real name is Natasha. In my opinion this is a better, more dynamic pose than the official KM Black Widow miniature, and on that subject, I can highly recommend Reaper Miniatures. The castings and sculpting is excellent. What's more, the miniatures are all single piece. I just wish Reaper was more available in the UK. 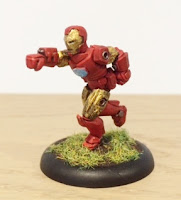 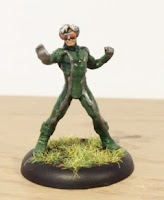 Hawkeye, Iron Man and Speed have featured on the blog before and have been re-based. Hawkeye and Iron Man are from Crossover Miniatures, and although I've previously been very happy with them, these two are a bit clunky, and Iron Man is a bit small. There's a Reaper model that will make fore a better Iron Man that I might get, and I may have a go at putting together a more modern looking Hawkeye from my Wargames Factory survivors.

Speed is a Heroclix model. Technically, the model is Kid Flash, a DC character, but you'd be surprised at how similar DC and Marvel characters are sometimes.

I have a few other heroes to add to my Avengers, before I move on to other super teams that I've collected models for.