Just when you thought I'd gone for good, I return stronger than before!
Apologies for the hiatus. We've been having our kitchen and dining room knocked through and done up, so the house has been a bit of a mess and I've not really had the space or time to get any painting done.
Anyway, remember some time ago, I began to work on a Marvel project using miniatures from a range of manufacturers? Well, Batman happened. Along with Operation Unthinkable, and a range of other projects I've just not had the motivation to get anything done.
Until now.
Knight Models have announce that they are releasing a Spider-Man Miniatures Game using the same mechanics as BMG, and the intial four factions will be: Spider-Man (and his Amazing Friends...that's not the official faction title, but in my head it is), Goblin Cult, S.H.I.E.L.D. and HYDRA.
Guess who's got a Hydra gang all ready and waiting to go? So, this week, I set about rebasing the models I'd already done, and painting up my four remaining Hydra goons. Apologies, once again for the quality of the photos; I'm still having trouble fnding a way to get decent pictures from my phone.

I've not done anything special with them as I like to keep block colours on my comic book stuff as I like the fact that (to me at least) it captures the four colour feel of the genre. I've switched the bases from 20mm flat bases to 30mm bevelled bases. Primarily this is to make them compatible with the SMG (I like that abbreviation), however, I've grown to prefer the bevelled bases for skirmish games. You'll also notice that I've gone for static grass on the bases. This is mainly to mask the raised bases on some of the miniatures and although it doesn't really match the urban environments many of them will be used in, the separation of the bevelled bases tends to make this not really matter. 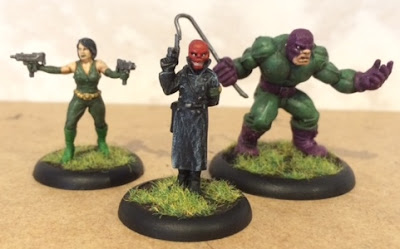 The leaders. Red Skull is from 'What The?' Miniatures, a really small scale miniature company, with a tiny range of Weird War II sculpts. They used to have a not-Captain America and Bucky available, but they clearly had some form of C&D from Marvel about it as he's no longer available. Fortunately, the unpainted 'Herr Totenkopf' looks like any number of skull-headed villains in popular culture and is still present in the store. Madame Hydra/Viper has been made using the Wargames Factory Female Apocalypse Survivors plastic kit. I may end up replacing her with a better model, but she'll do for now. Finally, Wrecker has been converted from 'Ram Jam' from Crossover Miniatures. Even though Crossover provide alternate heads for their models, I needed to file off the horns from one of the options and drill a hole in the hand for his crowbar. I'm aware that Wrecker isn't actually part of Hydra, but my thinking is that he's exactly the sort of hired muscle they'd make use of.

The Hydra Goons are Paramilitary Goons from Crossover Miniatures too. They are clearly sculpted to emulate the classic Hydra costumes, but are generic enough to be argued as any type of minion. Crossover also do heavy weapons goons, a goon officer, a female goon and a surrendering goon (which might possibly be a nod to Bob, Deadpool's sidekick), which all might find themselves added to my cell in time.
So now I have a fully painted and based Hydra crew for SMG. I know that not only are there no rules for any Hydra forces yet, and it's entirely likely that the Hydra henchmen in the game will have more varied weaponary. What's more, I've no idea whether Red Skull or Viper will make an appearance, but they're both likely. However, even if I can't use these models for SMG, I've also worked out that they make a handy 30 ratings cast for 7TV, so they are destined to hit the table at some point.
All I need now are some heroes to stop Hydra's nefarious plans. I'd better get assembling...