The Mustering of the Host

I've now managed to re-base roughly 1000 points of my Wood Elves into a legal force for Kings of War. I'm not sure whether it would be a particularly effective army, as it lacks any real backbone, but at least it's playable.

The units I've added are most of my favourite units from WFB. First up is my Treeman (now a Tree Herder), Steve. I can't remember when, how or why he was named Steve, but whatever the reason, it stuck. In WFB this was a solid unit, able to shoot, fight and cast limited magic; the Treeman was one of the units which didn't completely suck following the change to 8th edition, but this also made him a massive target for every flaming war machine attack in the game.

In Kings of War, the Tree Herder has lost his ability to shoot, but is still formidable in combat (especially in the flank or rear), surprisingly mobile and able to provide some limited magical support. Of most interest to me though is the fact that he lacks the weaknesses of WFB (flammable and a save that didn't work against the mountains of magic in the game), and so will not need to be as cautious. I'm looking forward to getting Steve back on the table. 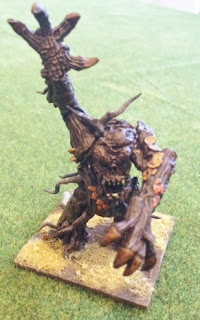 Back in 7th edition WFB, when I still enjoyed the game, I had a lot of time for the humble Great Eagle. For 50 points you could hunt war machines, redirect charges and march block your opponent whilst the archers took them apart. They were phenomenally useful. Then cam 8th, and the mighty Eagles were reduced to being throwaway chaff that could do nothing to impede enemy hordes as they ran through the woods...RAN THROUGH WOODS!!!...to get to you.

There are no Eagles in the KoW Elf list, and although there are allied units I could used them as (such as the Pegasus from the Forces of Nature list), I've decided to re-purpose my Eagles as Drakon Riders. They are now a mobile and hard hitting unit which is ideal for getting behind enemy lines. Given what I've seen of the effectiveness of flyers from the Wraiths in my last game, I think the Eagles are about to become star performers once again. 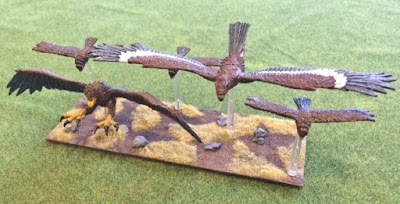 Finally are my beloved Wardancers. I remember reading the first WFRP article in White Dwarf about Wardancers and being captured by the idea. I loved the mechanic where you could tactically choose how they would behave in each round of combat. Small units of them were vulnerable to missile fire, but extremely potent if there were able to get into the flanks of the enemy. They were a scalpel, and I was the surgeon, dissecting my enemy.

Sadly, no unit got hit with the nerf-bat quite as hard as Wardancers in WFB 8th. As skirmishers, they could not remove the stubborn rule from enemy units; it didn't matter how many hits they did (a unit of 8 was capable of 25 attacks), a large unit of the enemy would always hit back with full force, unless you used them very carefully, they'd simply bounce off the large blocks of plastic your mindless opponent was throwing forwards with the clumsy abandon of a hyperactive toddler.

Do I sound bitter?

In KoW, my Wardancers are going to become Palace Guard. They lack the copious special rules of their former incarnation, but the stat-line does reflect the Wardancers' former glory to some extent. They will be able to hit hard, but as only a troop, they won't be able to take much damage. Therefore, I'm intending to use them behind my line of archers to counter-charge any enemy breakthrough, and counteract enemy flyers. I'm not sure how effective they'll be, and I may actually need to paint a few more to make them truly effective, but it'll be interesting to find out. 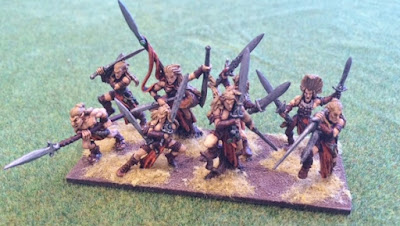 So there's only a handful of units left to go. There are my characters and my cavalry...oh...and a dragon!

It's looking my my February goal will be successful.
Posted by Kieron at 04:34