"I'll play this stinkin' city like a harp from hell!"

I've had a bit of a rush of motivation recently and managed to get quite a bit of painting done. This has been focused mainly on my BMG miniatures.

First up, my new Penguin crew. 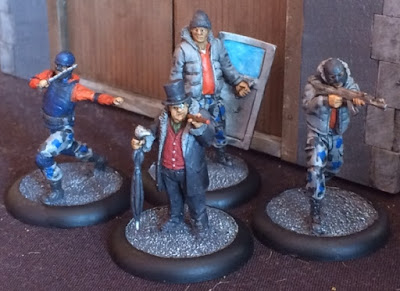 I got this crew for Christmas and I've been putting them off due to the camouflage on their trousers. I've finally plucked up the courage to tackle them. As it turns out, I'm quite happy with my first attempt at camouflage, although it's helpful that I don't have to follow a specific design so I went for an urban scheme that I made up on the fly.

I've given all the henchmen orange tops as I want to link to the fact that like most of the henchmen in the game, they are Arkham City prisoners. I also like to add some orange in so that the Blackgate Prisoners and Lunatics fit in with the look of the rest of the crew.

Penguin himself was simple and fun to paint, a really characterful sculpt. Rather than be a direct copy of the Arkham City game, this version seems to draw from several different versions of Penguin: Danny Devito, Burgess Meredith and the Arkham Games. I've seen people paint him in homage to each of these, but I've gone for something more neutral, just because I wanted to.

One of the interesting details of this crew is that they were amongst the earliest models in the range and they show it in the awkwardness of putting them together. Penguin, the henchmen with the gun and the one with the baton came in three pieces each and were a bit of a pig to assemble. KM's sculpts seem to have grown less fiddly over time. 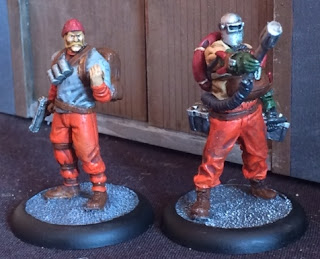 In addition to the Penguin crew, I've managed to completed the remaining two Blackgate Prisoners, Little Spark and Prisoner 05. I've come to really like painting the prisoners, as I've used the same drill as usual with these, nothing special, although Little Spark has lots of cables and wires that needed picking out. 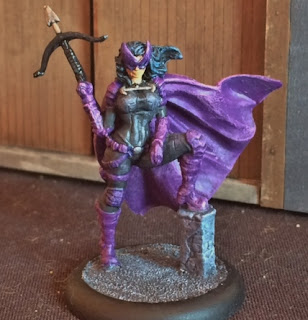 With all these criminals on the loose, Batman's going to need help rounding them up. That help comes in the form of Helena Bertinelli, the Huntress.

I've opted for a more modest outfit than the official paint scheme which has a ridiculous amount of bare flesh on display. Mainly this is because the costume I associate with Huntress is like this, but also because the other costume design is just silly for a vigilante.

I don't know why, but each time I photograph this model, she doesn't look as good as in real life. I'm actually really happy with her, but the camera seems to pick out flaws I can't see with the naked eye.

So it's been a productive few days, and there are a few more things that I've been painting which I'll keep under wraps for now...
Posted by Kieron at 15:08