I've had a bit of a busy month with work, and so my painting and gaming has taken a bit of a back seat for a few weeks. I have however had a steady stream of parcels arrive, delivering a range of fun goodies that I've been snapping up online - more of that in the coming weeks.

However, I was particularly pleased to receive a delivery from (appropriately) across the pond, which cost me, including postage, the staggering sum of £8. I present my Teenage Mutant Ninja Turtles... 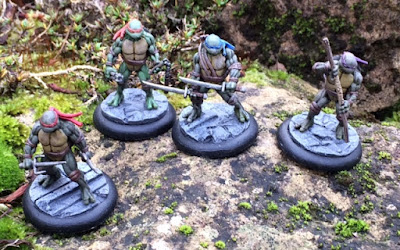 The models are from the Heroclix TMNT start set, and as such are available for next to nothing as singles from online retailers. I needed to do a little bit of hot-water-trickery to straighten the weapons, and there are some mould lines I worked on that show up worse in these pictures, but at the price I paid, I'm not complaining.

I've also departed from previous behaviour by mounting them on resin bases as I'd 'won' a few at a recent BMG event, and had also got my hands on a few with some second hand purchases. The resin bases add some much needed weight to the models, but will also serve to distinguish my TMNT models from my other projects. 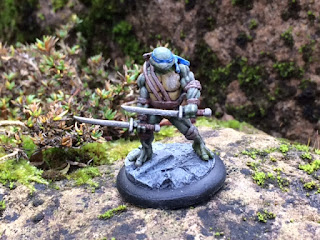 Leonardo is probably my favourite of the sculpts, as he's a little more dynamic, and this allowed my so stand him on a split level base. I almost messed him up when I began to highlight in white, and it looked awful (you can still see some of it on his chest and face), but this small crisis led to me discovering that you can apparently highlight green with pale brown. 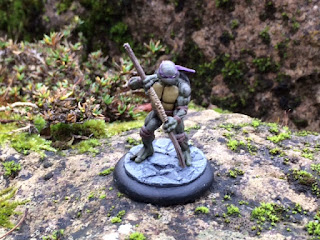 Donatello required the most weapon straightening of the four, unsurprisingly. With clix this is easily done with a cup of boiled water and a cup of cold water. Dunk the miniature (prior to painting) in the hot water for a couple of seconds until the bent bit goes soft, take it out, straighten it, and then dunk it in the cold water to set it.

I was worried about Donatello's colour being too brown during painting, as I'd done him in Vallejo Brown Violet. However, the light brown highlight I did after messing up Leonardo, actually brought the others closer to Donnie's colour, reducing the contrast and making his colour seem more right. 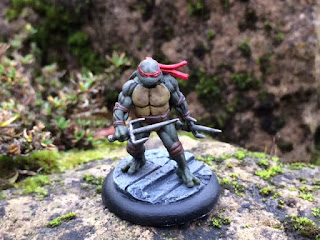 Raphael is my favourite character of the four, and fittingly is the one I'm happiest with in terms of painting - both in colour palette and accuracy. Again I was able to base him on a split level base, making him a bit more dynamic. 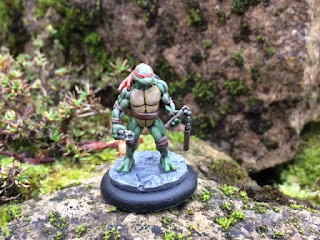 Of the four, Michelangelo caused me most grief. As I was trying to get each turtle a slightly different shade of green, I used GW Goblin Green for Mikey, and even with a wash of Agrax Earthshade, he was looking far too vibrant. Combined with this, his stance is not only the most dull, it's also least fitting to the character's personality. What's more, the mould lines are more pronounced on Mikey.

Despite this, I was relieved when the brown highlight dulled him down enough to at least make him fit in with the others, and this means that I can happily put up with him for the time being. At least until I can source a better scuplt that reflects his chaotic personality...and has a skateboard.

My intention is to use these models with 7TV2. If you weren't already aware, Crooked Dice have done some free PDF download supplements for a few well known TV shows and films (so far, they've done: TMNT, Scooby Doo and Star Wars), containing rules, profile cards and scenarios. I already have the first of my villains in the works to face the turtles, so expect to see mutants, aliens, robots, ninjas and roving reporters to pop up on the blog over the next couple of months.
Posted by Kieron at 06:59