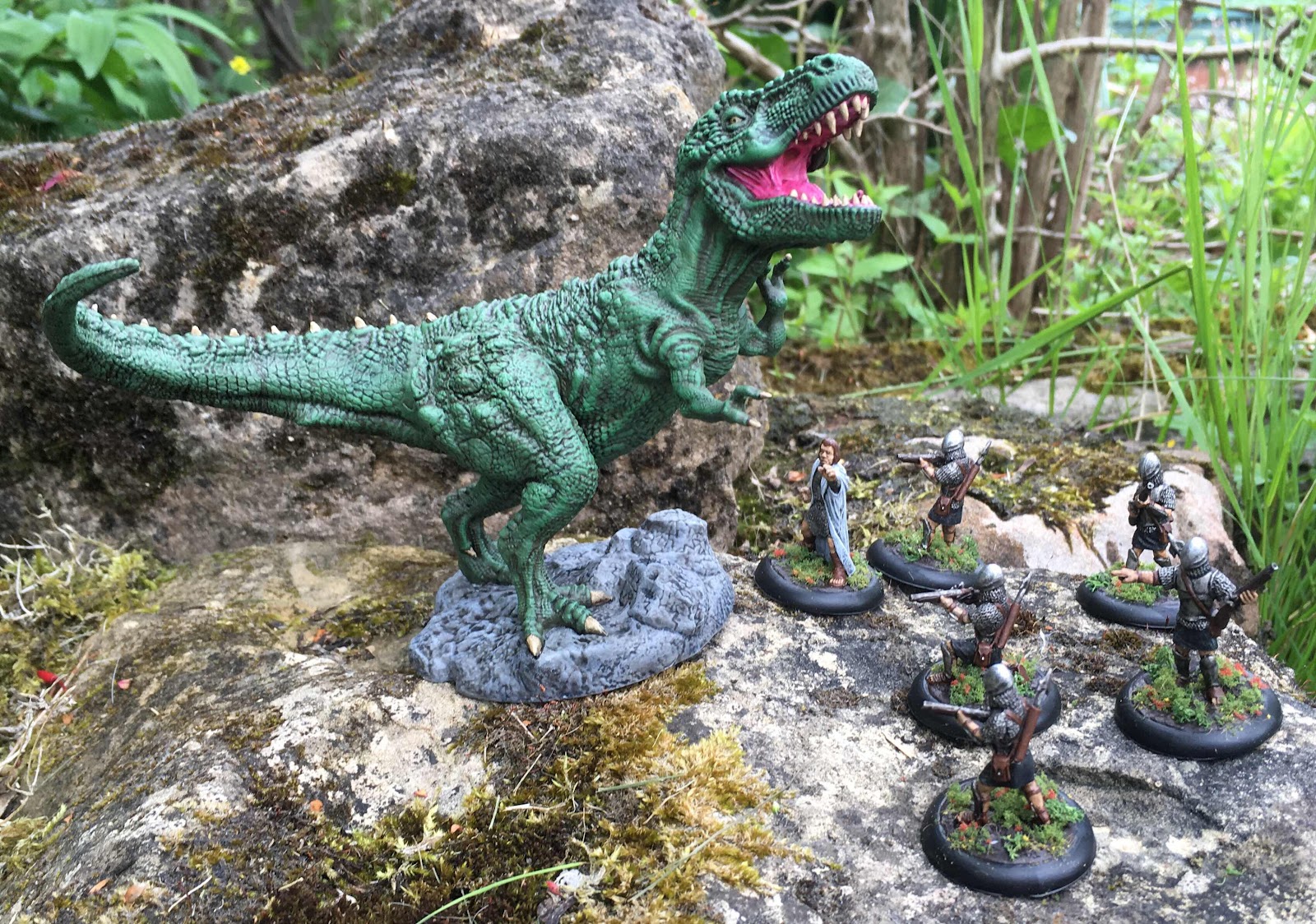 I’ve finally finished some painting.
I’ve been out of sorts for about a month and not really been in the mood to paint. There’s been a variety of causes but most of this batch of figures have been in my painting queue for quite some time. However, I’ve been spurred into getting them finished by the impending arrival of 7TV: Pulp. 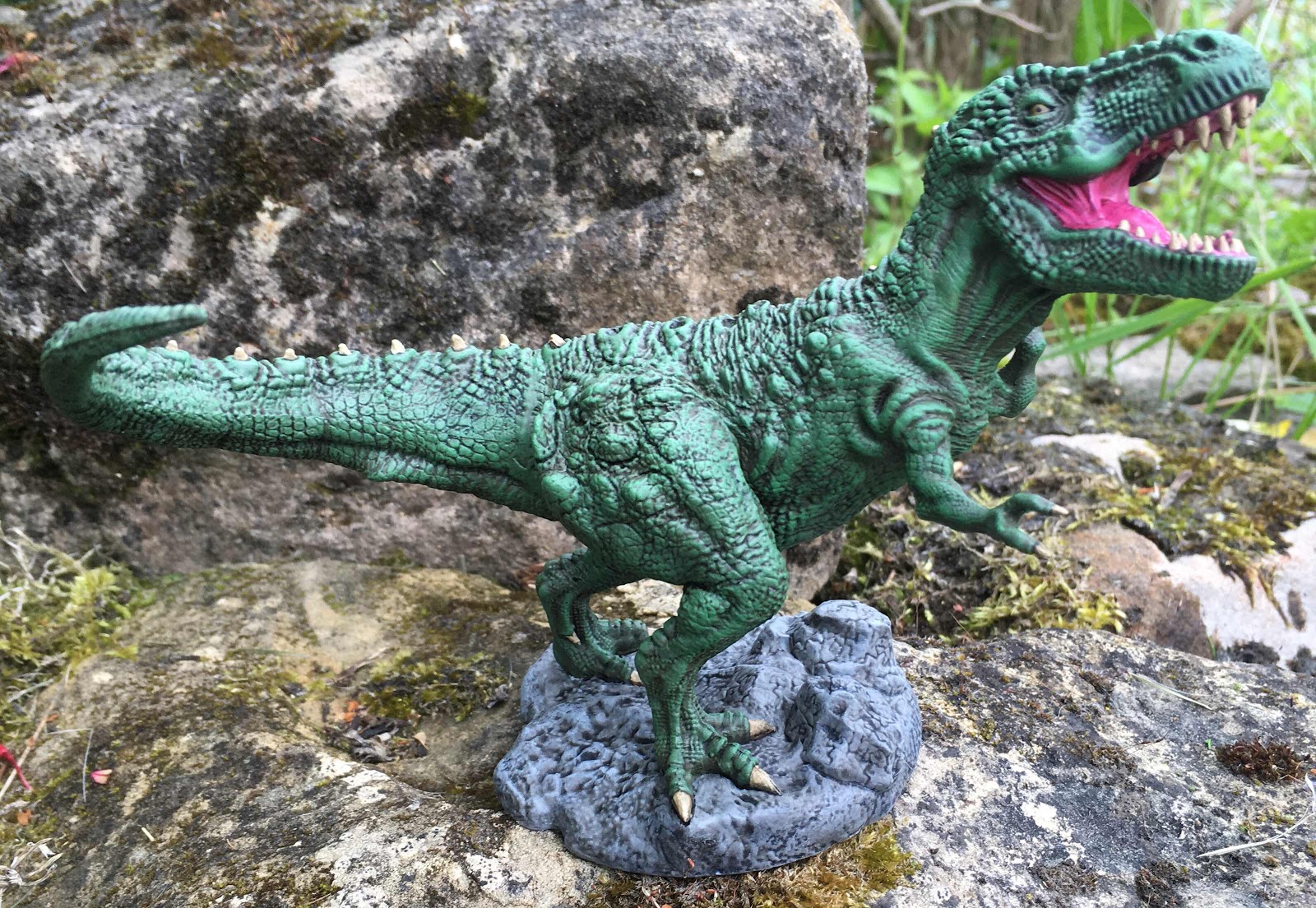 First up is the T-Rex I picked up at Chillcon in February. It’s from Wizkids’ Nolzur’s Marvellous Miniatures line of unpainted, pre-primed plastic miniatures. They are really inexpensive given the size of the model (I got mine for about £12).
It’s a really nice sculpt with a very good level of detail. There were a couple of gaps to fill, especially around the tail (which came separate), which also needed some work to make it fit properly. The sharper points, like the teeth, lose a little because of the material, and there were some mould lines (some of which I missed), which were easy enough to remove. 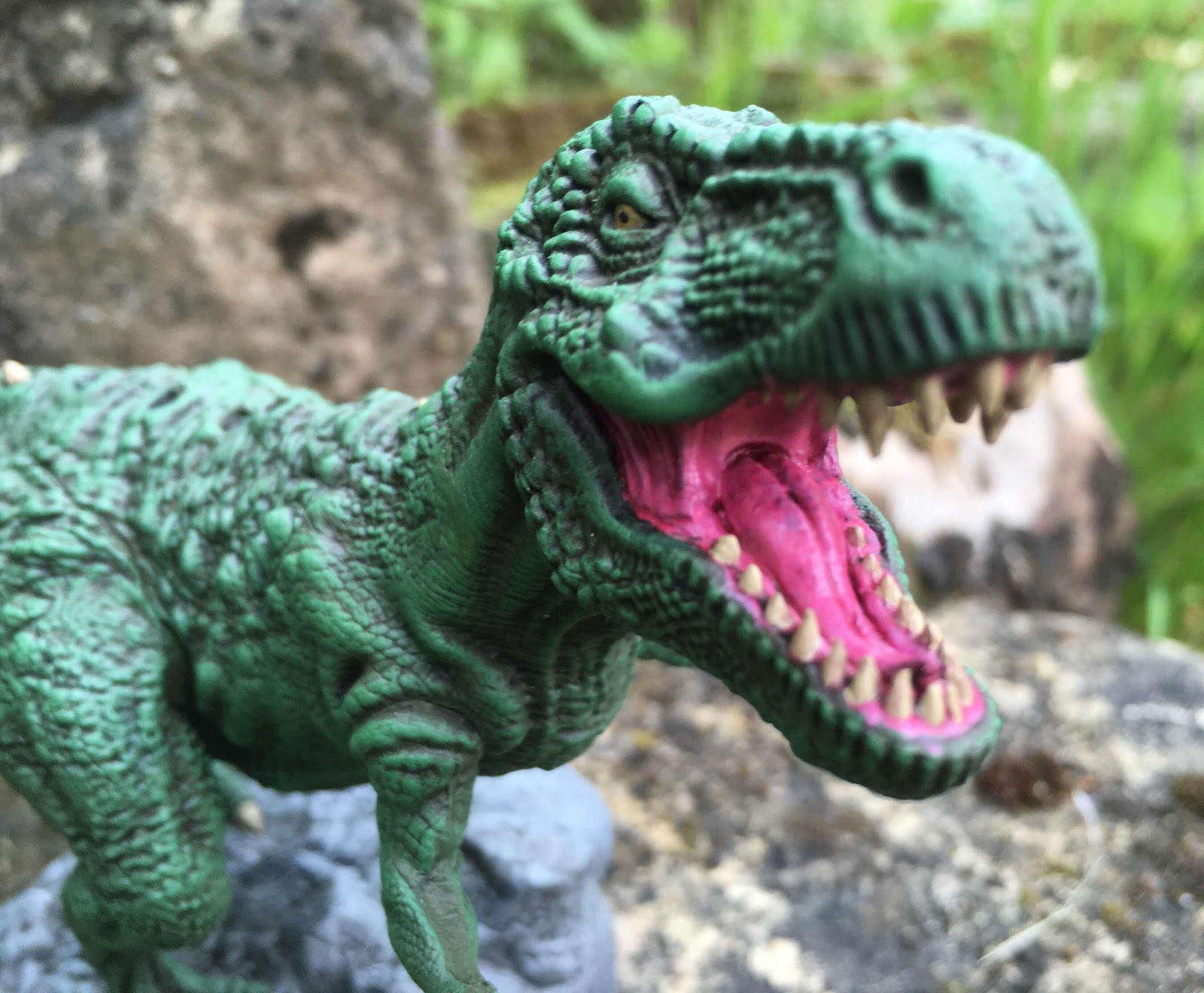 All in all, I’d really recommend this line, and I’ll definitely be picking up their Triceratops at some point. However, I want to explore the range properly to see what I can use. 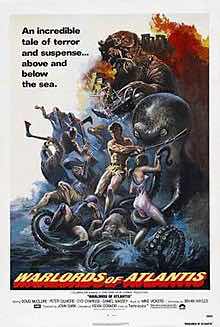 The other miniatures are from Antediluvian Miniatures and more than resemble the bad guys from one of my favourite films when I was younger, ‘Warlords of Atlantis.’ 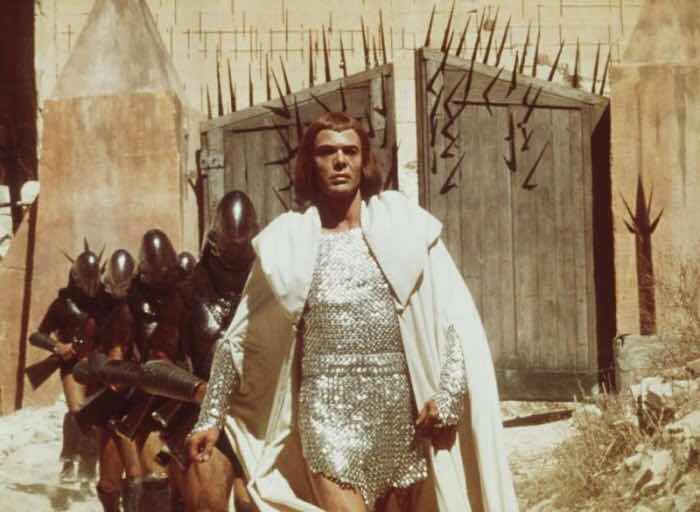 Atmir, the leader, was tricky to paint because his costume is so pale, with it largely being white and silver. I’m also not overly pleased with the face, but I’ve decided to leave it ether than keep adding layers of paint. 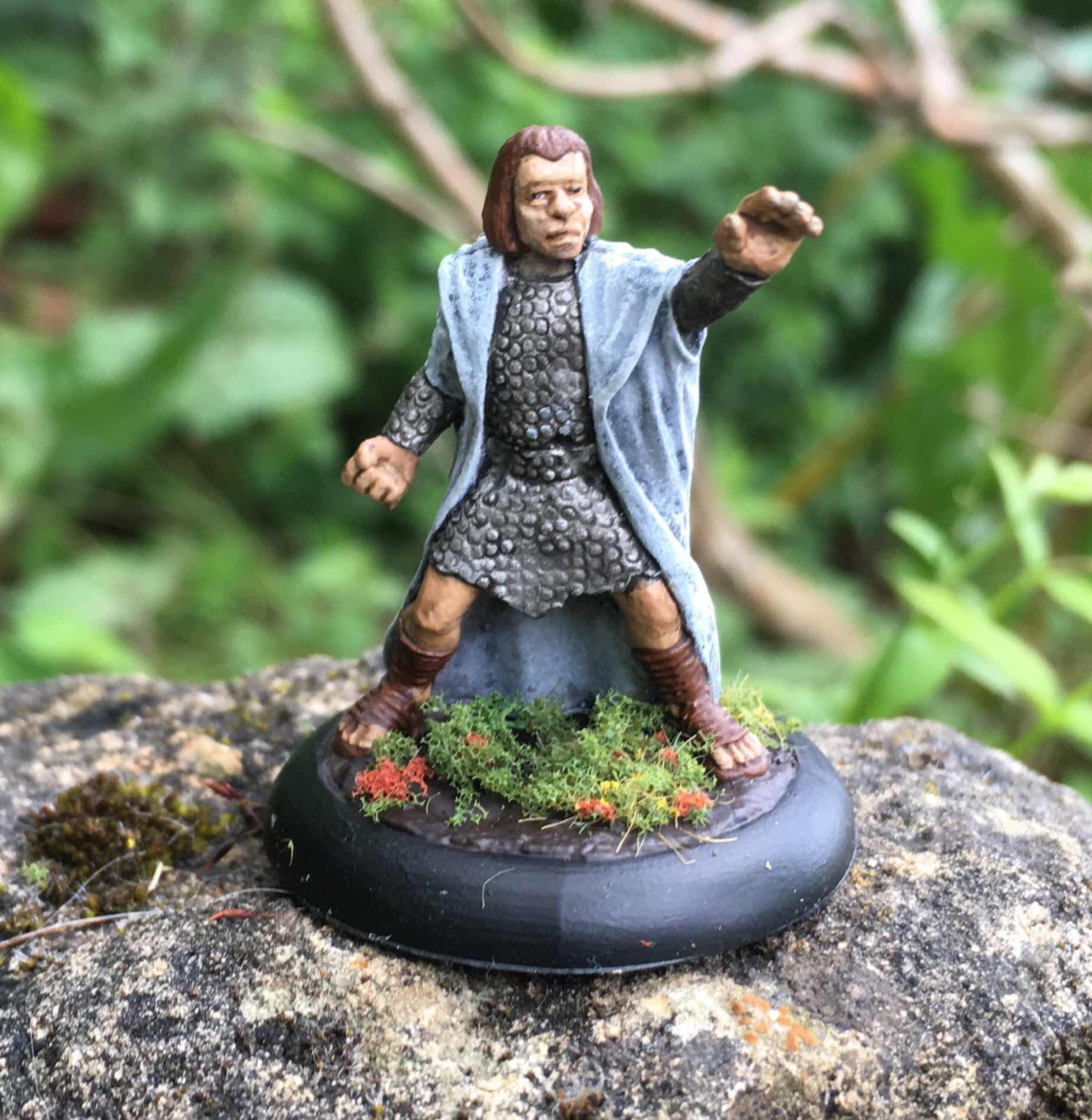 The Guardians looked easier to do than they were, and I think I made a mistake by undercoating in black instead of my usual pale grey. It had an effect in the skin which I didn’t like and so I ended up doing it twice. 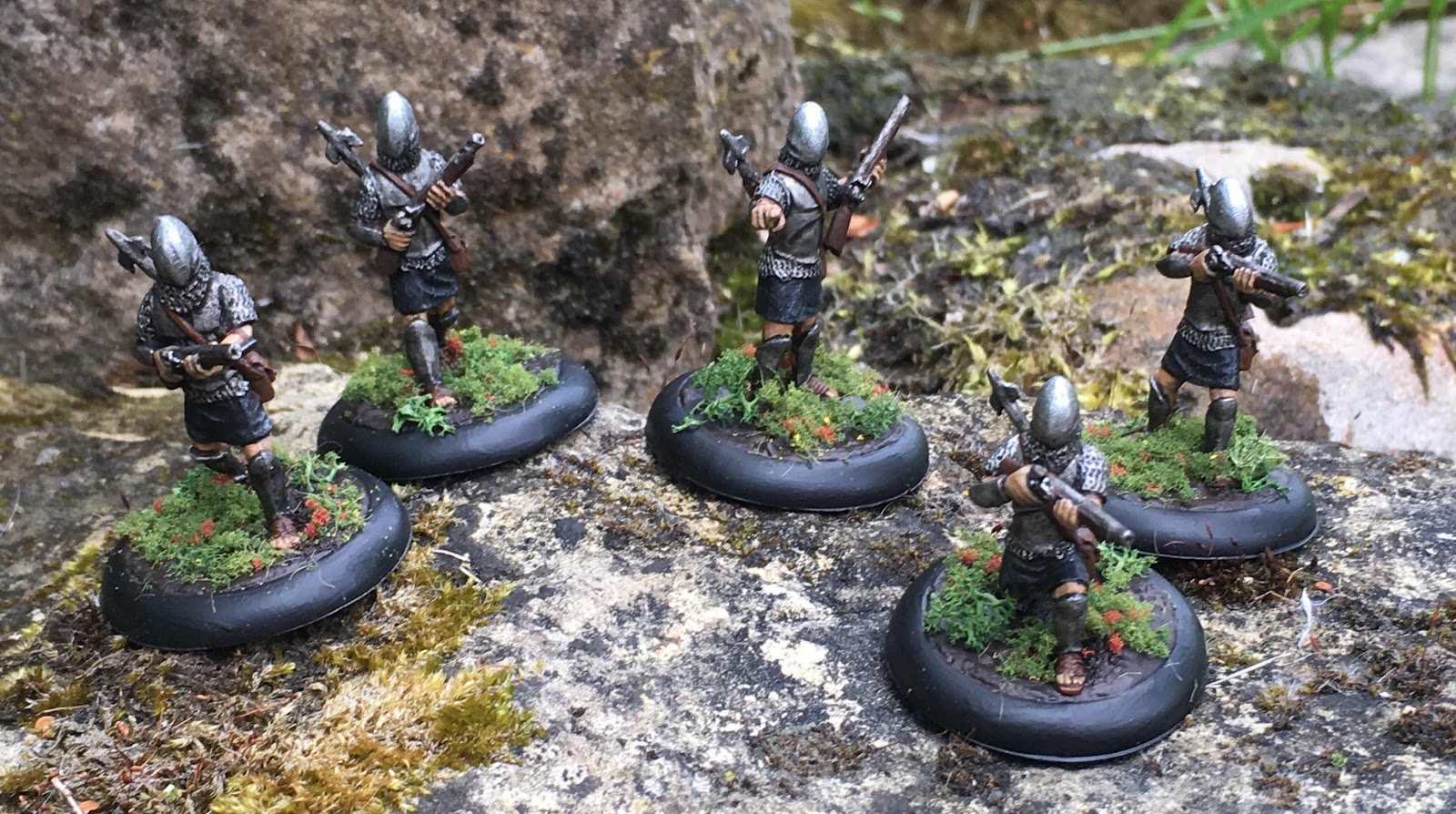 I’m pleased to have got them done though, as I  was beginning to get frustrated at my lack of progress. These seven models also have a positive effect on my current painting tallies, although this is undermined by me picking up four LotR models:
Acquired: 72
Painted: 57
I’m really looking forward to getting my hands on the 7TV Pulp box as it’s arguably more up my street than the Apocalypse set (excellent as it is) and I’ve go dozens of ideas of mini projects to do.
Posted by Kieron at 05:26