After getting side-tracked by superheroes for a bit, I'm returning to the task of finishing off the contents of my Start Collecting: Daemons of Tzeentch box. This time I've focused on what passes for the long ranged threat of my burgeoning army: Flamers and an Exalted Flamer. 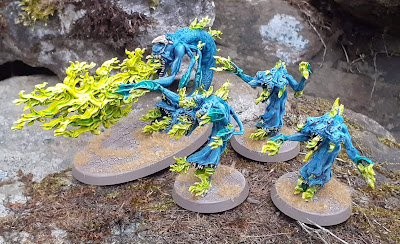 I will admit to the fact that one of the reasons for my Daemon hiatus was not really knowing how to approach painting these models. All the painting guides I looked at seemed to focus on air-brushing or wet blending, neither of which are my bag.

I settled on going for a simple Drakenhof Nightshade wash (twice) over a white undercoat, highligted with Blue Horror, using a combination of Nihilakh Oxide and a green wash on the 'hands' rather than the more usual purple (because I didn't have a purple wash). The flames were done with Tesseract glow as usual.

I'm not entirely happy with the Flamers because they're so indistinct. The faces (there are many of them) all merge into each other and so make it hard to give the models any personality. Admittedly, this fits with the fluff of the daemon, which is meant to be constantly changing, but you've probably noticed that I like clean, neat colours on my models - hence the preference for painting cartoon characters. 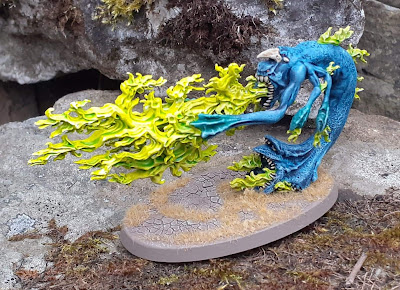 I much prefer the Exalted Flamer due to the more defined features giving a clear focus to what you are looking at. If I have a gripe about this one, it's the flames being unnaturally linear, which is a side effect of them being cast on a sprue. This is minimised a bit by flames coming from the arms widening the plane of the flames. I'm also a bit concerned that the base is a bit empty, so I might add a scenic rock or two in time.

I've only got the Screamers left to do from the Start Collecting box, so I'm feeling a bit vindicated that I've almost got the whole box done, as it was a bit of an impulse buy. With any luck, I'll get them all done by the time I'm actually allowed to play a game with somebody.