I'm back. I've not been anywhere, I'm just conscious that the blog has been conspicuously quiet for a few weeks. The reasons for this are twofold, the Christmas Season and its inevitable work parties (which ALWAYS fall on a gaming night; have you noticed that?) have meant that I haven't played any games, and the general de-motivation I've been experiencing have meant that I ahven't done any painting either. Essentially, I've had nothing to write about.

So I decided to remedy both of those problems. Firstly, I've arranged a game of 'something' with Matt for Thursday and our first choice of game was one for which we neither had rules nor painted miniatures. If that's not motivation, then I don't know what is.

The game we're playing is 'A Very British Civil War,' an alternate history setting in which Edward VII did not abdicate and was forced by circumstance to ask Oswald Mosely, of the British Union of Fascists, to form a government, an act which propels Britain into civil war as the Church, the Communists and numerous other factions object to the 'new order'.

In terms of rules, we'll be using a variation of Necromunda I've been working on over the past couple of weeks. We decided to use these rules because a) we already know them, b) we wanted to keep the number of models required to a minimum and c) I've got a couple of articles from Wargames, Soldiers and Strategy which outline a variation of Legends of the Old West for the setting and it was easy to convert to Necromunda.

So with out further ado; here are my Fascists. Sergeant Jack Boot's company of the South Yorkshire Cohort and their best pamphleteer and recruiting officer, Heather Brown: 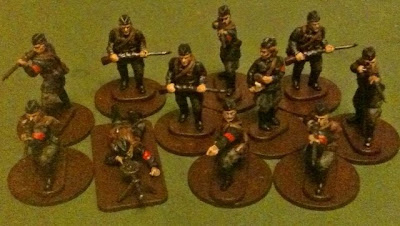 Why Fascists? Well, whilst out shopping I was perusing Wargames Emporium and spotted a little gem in the form of a second hand box of Plastic Soldier Company Russians for a tenner. A couple of them had been started but a price of less than 20p a model was a deal I couldn't pass up. I was originally intending to use them as Communists, but I'd want a more rag-tag feeling if I do them so another look at at the models in caps told me that they'd do a fair impression of the B.U.F. (to be honest, I'm also rather tickled by the irony of using Russians for Fascists...I need to get out more).

The models aren't completely finished (there's detail work and bases to be done) and I'm not entirely happy with them, but they're certainly usable. To be honest, I've found that the PSC models lack the definition that I kind of rely on for my painting style to work as I tend to use washes to hide my sins. I'd be disappointed if I'd paid full price for them. As it stands I can probably squeeze out another company of 10 and a couple of staff models and I'll still have enough figures left should I give in to my urge to do some Weird War II stuff. 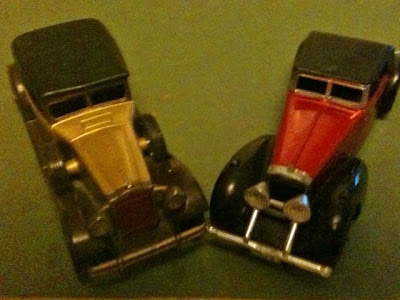 To go with the B.U.F. I've dug out two vehicles for them, a Packard Victoria and a Hispano-Suiza. These were my Grandad's, each of the grandkids got two of his collection when he passed on, and so I won't be converting these at all. However, they will serve until I can get my sticky paws on something a little less flash and a little more British for the Fascists to drive about in.

Finally for now, the title mentioned fascist pigs...and here they are: 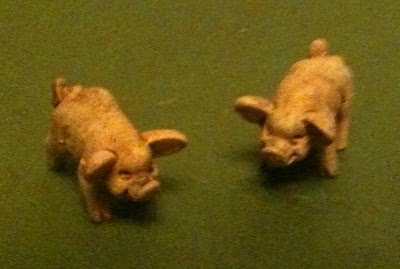 Secret Santa at work proved that since starting my new job in September, there's at least one of my colleagues who didn't have a clue what to get me, and so I smiled politely when I unwrapped a travel version of Pass the Pigs. However, it would be a shame to leave a gift unused and so the pigs have been quickly repainted as scenery (or objectives) for skirmish games. Yes the ears are a bit big and they are weirdly proportioned (and have freaky smiles), but they were free, are roughly the right scale and I can pretend that they're a rare breed.

Details from the game later in the week.
Posted by Kieron at 11:37