Opening Salvo in the Struggle for Sheffield

Last night saw Matt and myself play the first game set in 'A Very British Civil War' using our adapted Necromunda rules. We played a variation of the Rescue scenario from the Necromunda rulebook; basically we mucked about with the deployment arrangements, deciding to use our entire forces and having Matt's table edge be replace with the cottage.

As a side note, before I begin, it was really nice to fill a table with scenery for once and make a really good looking table. As it happened, we only actually ended up using a quarter of the table, but it was really satisfying (is that weird?) to have a fantastic backdrop the the action. 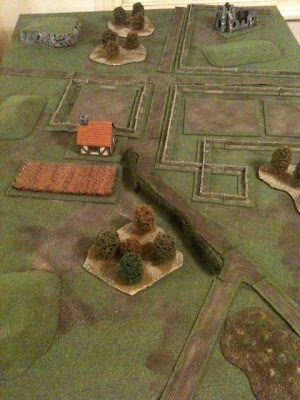 Even before the Red Brigade's formation in Sheffield, the B.U.F. had never really enjoyed large scale support in South Yorkshire. When Mosely spoke at the City Hall in 1934, several thousand protesters voiced their dissatisfaction at his presence, and the party had less than a hundred uniformed members in the city.

Therefore, rather than launch a direct assault on this vitally important industrial city, the B.U.F. leadership in the north set about a recruitment and propaganda campaign around the outskirts of the city in an attempt to address the lack of manpower issue. It was as part of this drive that Recruitment Officer Heather Brown found herself knocking on a cottage door on the outskirts of Handsworth. 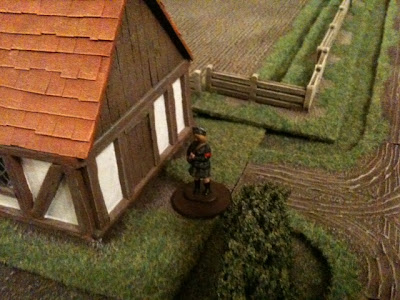 Little did the fascist femme fatale know that inside the cottage was the initial meeting of the Handsworth Volunteers, a local militia formed of war veterans who were determined to keep all armed factions, whatever their political leanings, out of their community.
Miss Brown was immediately 'arrested' for the crime of 'war-mongering' and placed in custody in the living room. Mrs Bean, the owner of the cottage provided the accused with tea and biscuits whilst the militiamen discussed how to proceed, completely unaware that their actions had been witnessed by Private Milligan (Miss Brown's escort) who now ran off to inform his superiors of the situation. 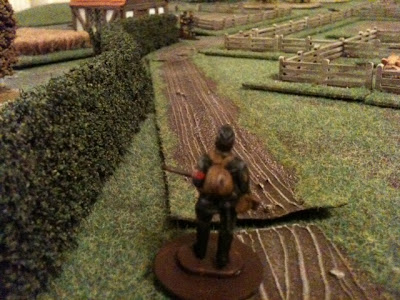 Realising that Miss Brown was unlikely to be alone, and that there were probably other fascists in the area, the Handsworth Volunteers placed sentries on the road and sent two men back to the village to fetch a car to move their prisoner to a more secure location. 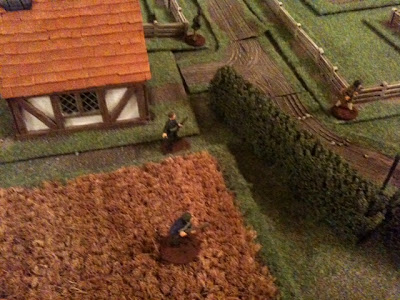 Sure enough, Private Milligan returned with help in the form of Sergeant Jack Boot's squad of the South Yorkshire Cohort. One section moved up towards the cottage through some trees, whilst the section with the Lewis Gun set up on the hill. Sergeant Boot and a couple of men waited in a car with the engine running ready to dash in and race Miss Brown away from the scene should the opportunity arise. 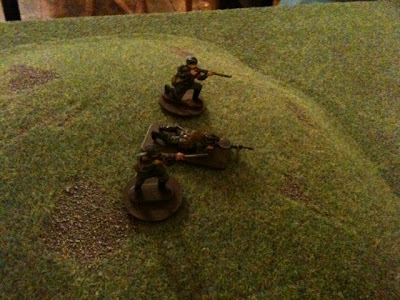 The first that the less-than-alert sentries knew of presence of the B.U.F. was when a hail of gunfire wounded a couple and forced the rest to run for cover. The Handsworth men were only able to muster sporadic return fire. 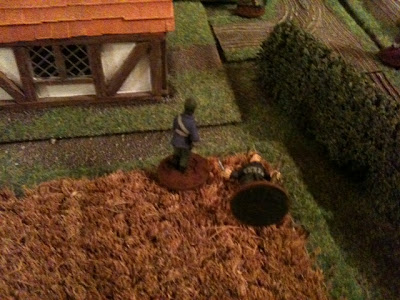 However, the noise from outside brought the rest of the Handsworth men tumbling out of Mrs Bean's cottage with their stolen Lewis Guns and soon the shooting had escalated into a full scale fire fight. 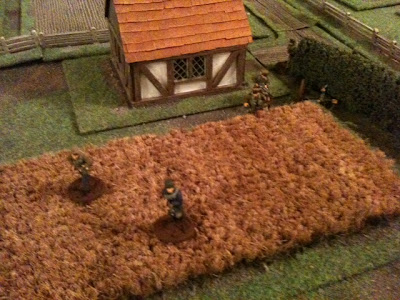 With his men in the woods pinned down, Sergeant Boot realised that his initial daring plan would not come to fruition, so his section got out of the car and began to edge up the road using the vehicle as cover. 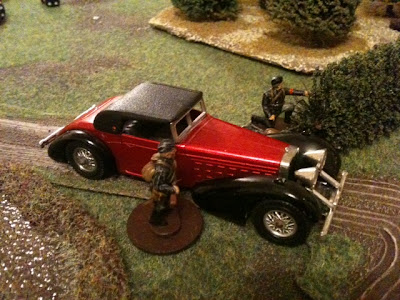 However, the local militia were able to counter this move with some well entrenched men returning fire from beyond the pig sty. 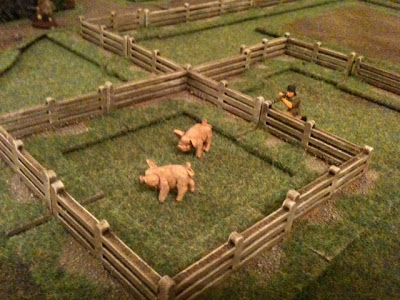 Soon the superior discipline of the Handsworth veterans began to tell and their accurate fire drove the fascists back through the trees and swept them from the hill. 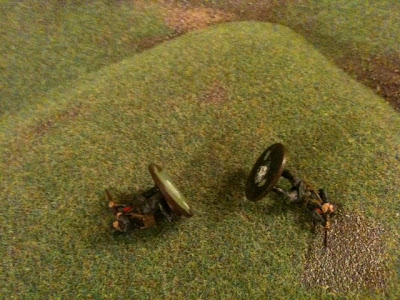 Realising that his men were taking casualties without making much headway, Sergeant Boot regretfully gave the order to withdraw for the time being. However, he swore that he would find a way to free Miss Brown from the vile clutches of the socialist swine. 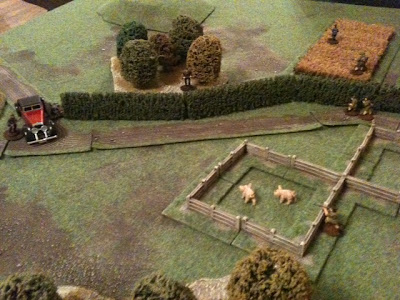 Despite the crushing defeat for the forces of fascism, the rules worked really well. The general lack of accuracy and relatively low casualty rate really captured the feeling of amateurs at war. The rather naturalistic terrain presented some real tactical dilemmas. Another success was the use of event cards (inspired by those on 6milphil's Adventures in Wargaming) which added a dash of humour as the opposing sides were helped and hindered by sudden downpours, impromptu cups of tea, crafty fags and a rogue nudie postcard.
In fact the only down side was that I've probably been a bit too restrictive with the faction 'gang' lists and Matt couldn't make his squad from the LDF list using the models he had and so he used the Regular Army list instead. At Matt's suggestion, I'm going to return to the faction lists and essentially make them more open but add flavour with a few special rules per faction.
Overall this was a really enjoyable game and something I'm sure we'll return to. I've already got plans to ambush the local yokels as they transport the fair Miss Brown back into Handsworth 'proper'.
Posted by Kieron at 01:47