A Feast For Crows

This week saw me play my first game of Saga, the new Dark Age skirmish game from Gripping Beast. We played a scenario from the rule book called 'A Feast for Crows' and this is a four player mash up in which the goal is to simply kill, kill, kill! Due to the fact that my Vikings aren't finished yet, I fielded the Gaul Warband from my Carthaginian army as Welsh (they're equipped with javelins so that it seemed sensible). The Welsh are very much a skirmish, hit-and-run force so I would be trying to keep the others at arm's length.

Following the scenario rules, we each deployed our 4 point warbands in a corner of the table. Going clockwise from me there was Mal with his Anglo-Danes (a tough nut to crack), Trev with more Anglo-Danes (not that he worried me, he was miles away) and to my right, my major concern, Andrew and his Vikings (which like to get stuck in). 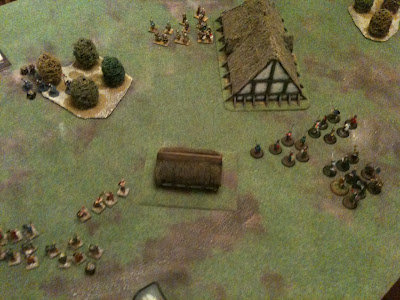 I figured that I would have a better time of it against Mal's Anglo-Danes because their strength is in defence, I thought that I would be able to pepper them with javelins before going in for the kill. So I headed of to my left - conveniently this also took me away from the Viking horde. Mal saw me as the closest target and so came directly at me.

Meanwhile, both Trev and Andy decided to ignore each other and trek down the length of the board to get to Mal and I. I think that they figured that they'd have a better time of it if they let us beat the snot out of each other and then they could mop up the pieces. In short...they were right.

The Anglo-Danes came directly at me, having no bows they needed to close the distance between us before my javelins could significantly weaken them. We engaged in a cagey battle where I backed off and would use Taunting to pull his units out of position, then Holy Ground to stop them reaching me, and finally The Deadly Strike to increase my javelins' damage potential. In reply, Mal used Intimidation to prevent my units activating and Shieldwall to protect his warriors. 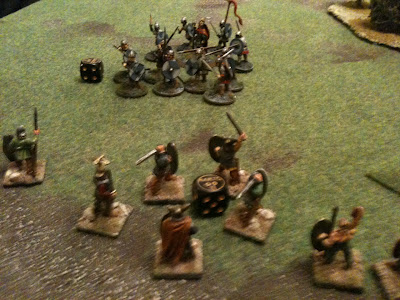 I got my positioning wrong at one point and lost a unit of Teleu to his Huscarls and Priodaur unit was severely mauled by Ceorls. The Welsh really struggle to compete in close combat with the other factions. However, my continuous rain of javelins finally told and I finished off his big unit of Huscarls with a charge by my Warlord and second unit of Teleu. Left with only his Warlord and a unit of four Huscarls, Mal withdrew and headed for the cover of some trees.

I'd won my first encounter, however, I was left with my Warlord, 4 Teleu, a unit of 8 Priodaur and a unit of 4 Priodaur. During my clash with Mal, Andrew's Vikings had been slogging towards me and they were almost in strike range. I decided to back off and shoot again as I was outnumbered and had nothing that would stand up to his big unit of 8 Hirdmen. 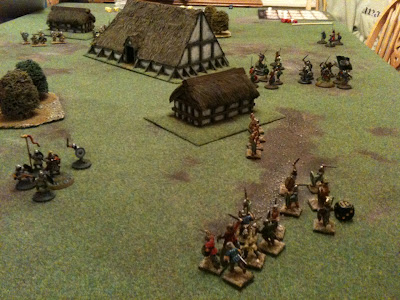 However, it soon became apparent that this tactic isn't as effective against Vikings as their Frigg and Njord abilities meant that the Hirdmen could charge double range and not gain fatigue. I realised at this point that the Hit and Run ability would be really good for me as it would mean that I could put even more distance between us when he wasn't expecting it - however I wasn't rolling any sixes and so this option was denied me. The Hirdmen ate a unit a turn and although I had managed to whittle them down to half strength, they eventually caught up with my Warlord and my game was over.

In the meantime, Mal had found that running to cover hadn't brought him the safety he'd thought it would. Although he'd escaped me, he'd run closer to Trev's Anglo-Dane warband which descended on him like hounds after a fox. Although he put up a good fight, it was five against twenty-five and his Warlord died alone amidst the trees. 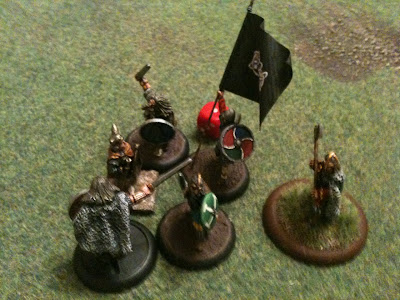 Mal and I headed to the bar whilst Trev and Andrew finally decided to get stuck into each other. The Anglo-Danes had taken more damage although the Vikings were spread out. Also, and I think this was crucial, I'd taken a lot of the sting out of the big Hirdman unit.

Trev headed for Andrew's Bondi, looking to destroy them quickly before they could join up with the Warlord. Predictably this brought the Viking Warlord scurrying back. In an attempt to weaken the Andlo-Danes' defence, the Bondi units hurled themselves repeatedly at the the Shieldwall. The Thor, Ullr and Ragnarok abilities saw the Bondi remove one of the Huscarl units but were badly mauled in return as the Anglo-Dane's exploited fatigue and their Dane-Axes. 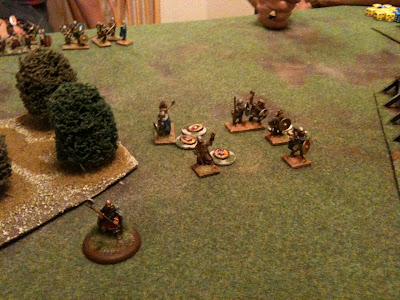 However, in all this blood, the Anglo-Dane Warlord was suddenly alone with the Viking Warlord and his Hirdmen bearing down on them. They rushed into combat, sure of victory, only to find that a couple of Huscarl were close enough to aid their Warlord. The Vikings failed to hurt the Warlord, whose Dane-Axe cleaved through two of them and then The Push finished off the others. The Viking Warlord backed off, stunned at the ferocious defence his counterpart had put up. In return the Anglo-Danes charged the fatigued Viking Chieftain and cut him down to take full possession of the bloody ground.


My first impression of Saga is that it's a great game. It's easy to pick up, has loads of tactical options and really subtle differences between what appear to be similar factions. Due to the fact that you can always use your Saga dice for some abilities, a bad dice roll is not as crippling as it can be in other games. The game plays fast a furious and expletives fill the air as your opponent pulls off a combination of abilities that completely neutralise your carefully worked out strategy.

I don't really have any gripes at all (which is unusual for me) as the game delivers exactly what it promises. Straight fights could get dull in time, but the game caters for that by providing a range of scenarios to change the dynamics and goals of the game.

The Feast for Crows scenario has a little glitch which we spotted half way through. The way the turn order is determined means that it's always more effective to attack the person to your left as you'll usually get to go before them and so will always have the initiative. However, multi-player games are likely to be rare enough for this not to be a severe problem, and it would be easy to fix it.

This game is great fun, and I'd highly recommend it. What's more, with a 4 point warband being as few as 17 models, it has a low buy in cost and gets two Cheaphammer thumbs up!
Posted by Kieron at 00:17