Two Out Of Three Ain't Bad

Last Thursday saw me managing to fit in three, yes that's three, games of Saga in one evening. All of this makes for excellent practice for the upcoming tournament, however, rather than my usual exhaustive account, I'll go for something a bit briefer with a run down of the lessons learned in each game.

Game 1: Vikings (me) vs Vikings (Andrew) - The Challenge

This game saw me using my Gauls as Vikings for the first time, as that's what I'll be using for the tournament. I took 4 Berserkers, 12 Hirdmen and 16 Bondi; I kept the Hirdmen in one mahoosive unit and split the Bondi into two units of 8. Andrew took 12 Hirdmen in two units of 6, 16 Bondi in two units of 8 and 12 Levy in two units of 6. As you can our Warlords faced off in the middle whilst I bunched up in a rush to support mine, whilst Andrew split his forces in an attempt to effect a pincer movement (all a bit tactical for the Dark Ages?). 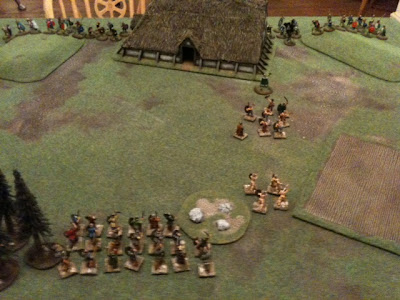 I raced forward to support my Warlord and launched my Berserkers into one of Andrew's Hirdmen units. Using Frigg to remove fatigue and Ullr to allow me to reroll missed hits, the Hirdmen were wiped out to a man. As expected, packing only Armour 3 the Berserkers were also cut down. This was going to be bloody. 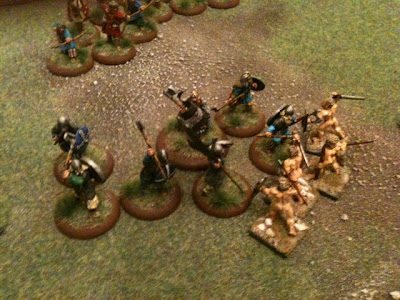 Andrews pincers closed in (missing a claw) and his remaining Hirdmen rushed over to interpose themselves between my big Hirdmen unit and Andrew's Warlord. I took the bait and again lauched a massive hammer blow. 12 Hirdmen and my Warlord (that's 29 attacks!) smashed into the opposing shieldwall, again using Frigg to remove fatigue. In desperation Andrew used Valhalla to sacrifice a couple of his men for increased attacks and cut down four of my trusty warriors. However, it wasn't enough as a storm of swords hacked the four remaining Hirdmen to pieces. This was all going rather swimmingly... 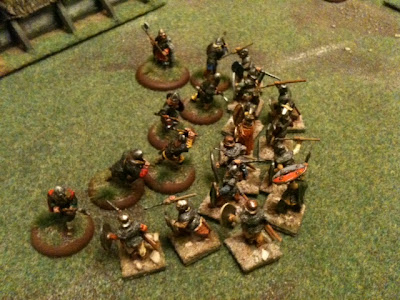 Next stop, the Warlord. My 8 Hirdmen and Warlord charged into the opposing chieftain and a number of things happened. Firstly, I forgot to use Thor to gain an extra round of combat. Secondly it turns out that I was playing the wrong game and Andrews warband was led by a Space Marine in Terminator Armour. Not only could I not hurt him (21 attack dice!), but his Power Axe also cut down four of them! Force to disengage, in desperation I tried again with just the four Hirdmen - surely it couldn't happen again...

It did. The were killed to a man. 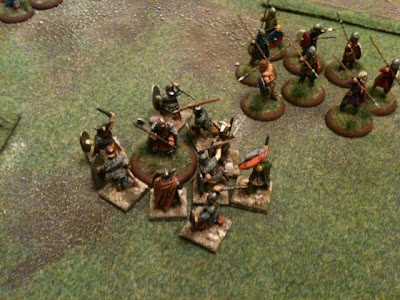 There had been sporadic combats elsewhere and I was no left with two units of four Bondi and my Warlord to face a Warlord, 12 Levy and 14 Bondi. I decided to go down fighting, and although the Levy were left alone, my Bondi died heroically defending their Chieftain. It wasn't enough and eventually my Warlord stood alone...and was cut down. 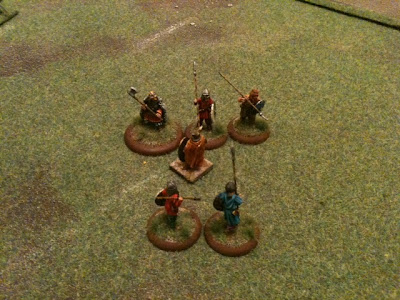 Given that Saga plays quite quickly, I set up for a 4 point game, this time against Kelly, who'd brought Vikings. For a bit of a change I decided to use my Gauls as Welsh this time. As well as my Warlord I had 8 Teulu, and 2 units of 8 Priodaur. Kelly fielded his Warlord, 3 units of 4 Hirdmen and a unit of 8 Bondi.

Aware of how fast and hard the Vikings could hit, I set up as far back as possible. I was hoping to whittle the Vikings down as they advanced and on the second turn I was pleased when I rolled enough dice to use Taunt and the Rising Out to call the Bondi forwards and then have all my Priodaur launch their javelins at them at once.

To my horror, not a a single Viking fell. They were now in strike range and I thought I knew what was coming. 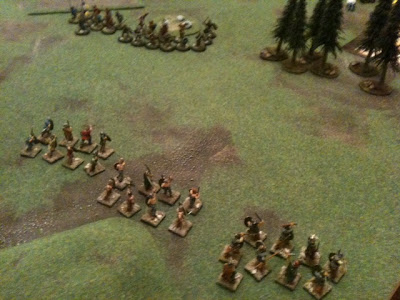 When Kelly placed his Saga dice, I noticed that he used them all on combat abilities and not activations. This gave me a clue to his intentions and when he activated his Warlord and the Bondi using the 'With Me!' ability, I used Holy Ground to reduce the Bondi's movement. The fell short on their attack and the Warlord was suddenly isolated. My Priodaur excelled themselves and cut the Viking Chieftain down.

First blood to me. Game over! 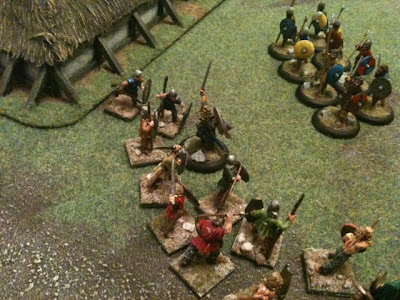 Given the sudden termination of my previous game, I had time for another one. This time against Tom's all-conquering Normans. He's been riding all over folks' warbands for a while and he approached this game with elan and confidence. However...I had a plan...

I kept the same set up as the previous game. Tom had his Warlord, 2 units of 6 Mounted Knights and 8 Sergeants armed with Crossbows. He massed his Knights on the flank and put his Crossbows in the great hall for protection. I spread out. I kept all of my units out of range of his Crossbows and all of them were in or behind terrain. I couldn't help it, but an evil chuckle escaped my lips as we began.

I got first turn and immediately used Taunt to bring one of his Knights units charging 12 inches forwards to the edge of a field. The Priodaur facing them launched their javelins and used the Deadly Strike to bring down one of the Knights. 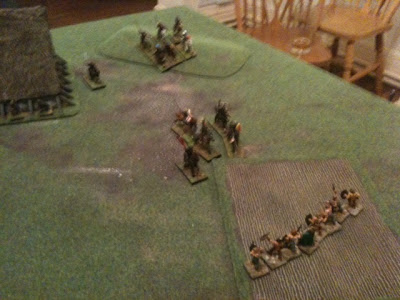 Knowing that I had Ambush ready to protect the Priodaur in the field, Tom launched his knights at the Priodaur in the centre. Norman Knights hit really hard on the charge, especially when they hit with Terrified to give the enemy fatigue before you start. However, they Normans were also fatigued so I used the dice to improve my armour and halved my dice to increase my defence. The Welsh line held as only four warriors were killed and another Knight was brought down.

Tom had now put his fatigued Knights between two units of Welsh and a volley of javelins, again supported by the Deadly Strike finished them off. 6 Knights killed for the loss of only 4 Priodaur, not bad. 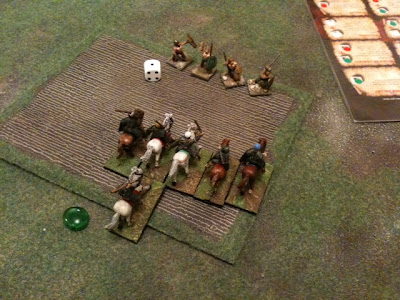 In the previous turn, Tom had used all his dice to get the exposed unit of Knights to attack and so the rest of his units hadn't moved. Realising that I had no intention of coming to him, Tom brought his Crossbows out of the house and launched another sweeping attack with his Knights at my Priodaur in the field (Tom had no worries about gaining fatigue due to such long charges). The Welsh trampled, four of them were killed and the rest were pushed back across the field.

However, the Knights were once again between two units of Priodaur and I again launched a Deadly Strike and used fatigue to reduce the Norman armour. Three Knights fell.

Realising that he was running out of Knights and I still had an untouched unit of Teulu in reserve, Tom got really aggressive and repeated use of the Activation Pool ability gained him the maximum number of dice. His remaining Knight crushed the Priodaur in the field, the Crossbows shot down a couple of the Priodaur in the centre and the Warlord rode down the remaining two. Finally he tried to move the Knights up to support the Warlord (who was looking vulnerable). I'd been waiting for this and finally played the Holy Ground that I'd been holding back. The Norman Knights pulled up short of their lord and could only watch as the Teulu rose up out of the long grass to surround him. 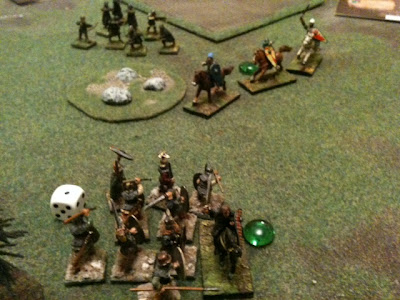 A cry of 'With me, boyo!' saw my Warlord and his Hearthguard launch themselves at the Norman Baron. I already had 29 attack dice, however given my experiences against Andrew's Vikings, I thought I'd better play it safe and used Strength Lies in Numbers to add another 8. Needless to say, the Norman Warlord was dragged from his horse, chopped into small strips and sprinkled with some cheese onto a slice of toast.