Another day, another battle. This time against Lee's growing Chaos horde, which has sprouted a mutant appendage which isn't encased head to foot in armour, in the form of a unit of Chaos Marauders. His full army consisted of: Level 3 Sorcerer (Lore of Death), Level 2 Sorcerer (Nurgle), Exalted Champion on foot, 9 Chaos Knights, 18 Chaos Warriors, 15 Marauders, 5 Marauder Horse, Warshrine.

The scenario was the Watchtower (the first time I'd played this) and I wasn't looking forward to the prospect of trying to shift Chaos Warriors from the tower with my weedy peasant units. However, to my relief Lee garrisoned the tower with his Marauders. Somewhat less positively, the presence of a marsh also saw both forces deploy on one side of the tower and so I was not looking forward to advancing into the face of a meatgrinder. 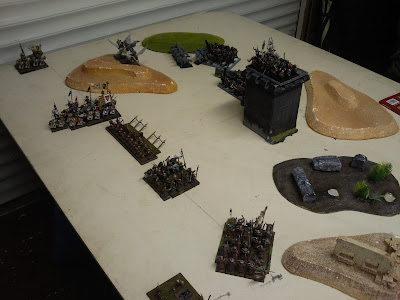 I prayed, as always, and Lee advanced fast as his metal legs could carry him. The warshrine added even more armour to the Warriors and the Marauder Horse were witheringly efficient in killing a Pegasus Knight and panicking the others, great start! In my turn I managed to rally the Pegasus Knights, advance the Knights Errant on the flank and move the infantry towards the tower. In answer to the scattering of the Pegasus Knights, the Peasant Bowmen peppered the Marauder Horse with arrows and brought down three. They didn't run and I was still facing an advancing wall of steel.

Then something strange happened. Lee declared two long charges with his Warriors at the Grail Reliquae and his Knights at my Knights of the Realm. Admittedly, had he made the charges (either of them) it would have probably been game over, but both were at long range and both failed. This left his Chaos Knights still a long charge away and his Warriors with their flank hanging out in a direct charge line from my Knights. However, to dampen my ardour for glory the Death Sorcerer then successfully sniped my Damsel with Caress of Laniph.

Never one to refuse an invite I charged the Knights in to the open door of the Warriors flank. Assuming a case of rubber lances (which it's always best to do with Bretonnians), this would leave their flank wide open to the Chaos Knights, so I moved to block them with the Pegasus Knights and then charged the Marauder Horse with the Knight's Errant hoping to overrun into the Chaos Knights. Eager to get in on the act, the Paladin led the Men at Arms in an assault on the tower. 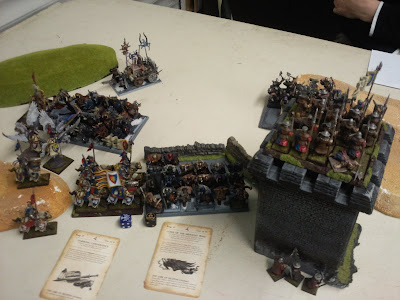 The Men at Arms, with the aid of the Paladin and the Prayer Icon of Quenelles (revealed earlier), withstood the Marauders' attacks and won the combat and broke the garrison to occupy the tower. I really started to get excited when the Knights of the Realm caused several wounds on the Warriors and won combat by a bucketload, however the party was cancelled when Lee rolled a double one for the break test. I was now in trouble (although it was helpful that he forgot to try to combat reform) and relying on the Knight's Errant. I was not to be disappointed as they smashed through the Marauder Horse and slammed into the Chaos Knights. I had the tower, the Chaos Knights were held in place and it was down to the Knights of the Realm to break the Chaos Warriors.

Lee charged the Warshrine into the flank of the Knights Errant (they looked done for) and rallied the Marauders. Another magic barrage (especially from Rot, Glorious Rot) saw several of my units whittled down and the Pegasus Knights destroyed. Combat saw the Knights Errant broken, and flee just too far from the Warshrine (taking it out of range of his Warriors). My BSB took down the Exalted Champion in one-on-one combat with style and panache and with the flanking still in place I won the combat and Lee couldn't repeat his leadership roll from the previous turn and the Warriors were broken and run down by my Knights. Things were looking good...although the Chaos Knights were staring ominously at the tower...

In my turn I did everything I could to protect the tower. I advance the Grail Reliquae towards the Chaos Knights, hoping to tempt them away from the tower, I marched the Knights of the Realm away from a flank charge by the Marauders, although kept the BSB close enough to lend aid to the Men at Arms and I moved the the Prophetess up to do the same should the Paladin die in combat. In my magic phase I was able to get Curse of the Midnight wind cast on the Chaos Knights and Harmonic Convergence on the Men at Arms. I'd done all I could, let the storm come. Oh...the Trebuchet blew itself up! 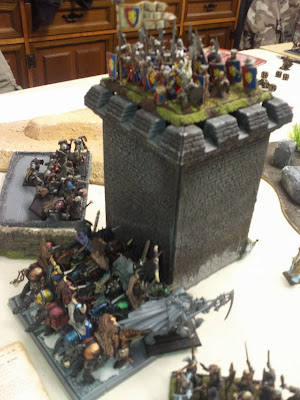 Even though they wouldn't be able to occupy the tower, the Chaos Knights were more than capable of butchering the occupants and so they ignored my Grail bait and barrelled straight into the tower. Magic was unimpressive and the Chaso Knights unleashed a bucket full of attacks and despite the magic aid, duly won combat (although the Paladin wounded the Sorcerer), however being stubborn in the tower and the nearby presence of the BSB saw the Chaos Knights repulsed.

Once again, a Chaos unit had it's flank wide open, this time to my Grail Reliquae. I did the maths in my head and worked out that to lose the combat Lee had to do five wounds from eight attacks and I had to kill nothing (which wasn't unlikely). Once again, to aid the combat I managed to get Iceshard Blizzard, Curse of the Midnight Wind and Harmonic Convergence cast on the combat. I had +5 CR before we began, would be re-rolling missed hits and and any 1's that I rolled. I also had the benefit of a 5+ ward save. Meanwhile the Chaos Knights would be at -1 to hit and -1 Leadership and be rerolling any 6's they rolled. Let battle commence... 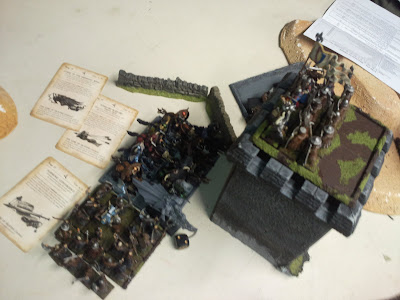 The Sorcerer and Knight unleashed their barrage of attacks. After several rounds of rerolls they had scored five wounds (just enough to beat me). If I rolled averagely I would be okay. I rolled better than average and the blessing saves all of the wounds. In return I wasn't even able to chip the Knights armour, but it didn't matter, the combat was won and with a reduced leadership the roll of five wasn't enough and the Chaos Knights were broken. To add injury to insult the Grail Reliquae pursued and caught the lumbering Knights...run down by peasants, oh dear, oh dear... 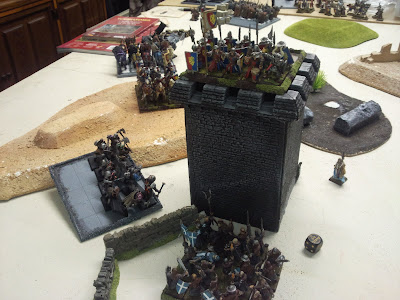 With that the game was over. Not only did Lee only have his Marauders and Warshrine left, but also the game ended this turn on a six, which was duly rolled.

This was a game where things went well for me. Admittedly, at the end I passed a few more ward saves than expected, but working on averages, that combat should have gone my way anyway. I was able to capitalise on a couple of mistakes Lee made and seize the initiative. However, it's worth noting that in three combats, I didn't actually kill a single Chaos Knight - they still terrify me!

With regard to my own troops, the Lore of Heavens was again indispensable in evening up the odds in combat. I also feel that I used each unit well with the Knights Errant and Pegasus Knights serving well in a flanking/blocking capacity, the Knights of the Realm were a one shot tankbuster, and the infantry units did sterling service in a reserve role rather than as main line combat troops (although the Paladin seriously stiffened the resolve of my often lamentable Men at Arms. My missile arm disgraced itself again, but Chaos Warriors are never going to be their favourite targets...what I need are some nice juicy, skirt wearing High Elves...
Posted by Kieron at 12:16