Thursday also saw me in the arena trying out the Rvdis rules for Gladiator fights. There were five of us playing and three of us were new to the rules. I was controlling a heavily armoured Myrmillo gladiator, Kelly and JP were both running net and trident wielding Retiarii, Trev had a lightly armoured and fast moving Secutor, and Matt was using the walking tank Hoplomachus.

The game itself is thirty years old and kind of shows it. Big reference tables with lots of codes can be really off-putting for the newbie. The game is organised in four round sequences with each character having a different movement in each round depending on their level of movement; for example, my Myrmillo only had 2 movment in the first round and one in the rest, whilst the Retarius had 2 movement in the first and third rounds and so was more mobile.

Combat is where the game shines with players having to nominate where they are feinting at and then secretly writing down where they will really attack (you choice is limited by where you feint at). The defender, if they are allowed to defend, must secretly write down where they will defend. If the blow isn't blocked then the attacker has a percentage change of hitting and then damage is determined by a further dice roll and the defender's armour.

Overall, I personally think that the game is good, if clunky. There are too many different tables and charts and stages for the game to flow freely unless you know it really well, and so the game is rather slow. I don't think that a gladiator ruleset is something I'll ever 'study', so I can't see this being remedied. However, the brinksmanship of the feint and block sequence is really good and prevents the game simply being a dice rolling contest as you weigh up the best place to attack or defend (always going for the weakest spot in your opponent's armour will usually find their shield in the way). With a little bit of streamlining and speeding up, this game could be quite addictive.

As for the game we played, JP's Retarius and Trev's Secutor made a beeline for each other, and Matt's Hoplomachus and Kelly's Retarius did the same and initially my poor Myrmillo was left to amble over to them slowly. Kelly found that although he could entangle Matt, he couldn't break through his armour, and JP and Trev sparred. 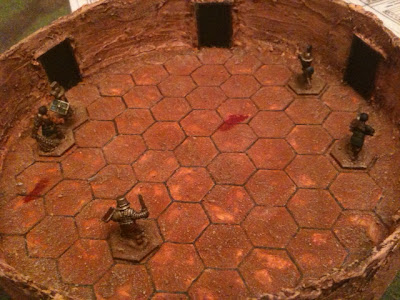 The deadlock was broken finally when half an hour later I made it into combat, and although I failed to stab JP's gladiator in the bottom, when Trev later turn his back on me I took his head off in one blow. What followed then was JP trying to dodge out of the way and entangle me, whilst I trudged wearily towards him (a bit like that scene in The Life of Brian). There was a bit of a hairy moment when my gladiator fell over and had to defend desperately for three rounds, however I got back off and the little Retard...sorry...Retarius ran away again. 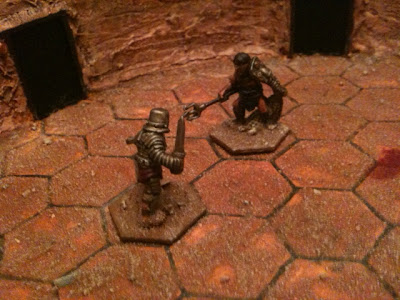 However, our very slow chase sequence had brought us over to where Kelly and Matt were still dancing. Matt did actually manage to stab Kelly with his spear at one point, but not for a massive amount of damage. Whilst he was doing this I managed to sneakily lumber up behind him to get some free shots in, however, I failed to roll 80% three times!

As time was getting on we all bundled into one big fight to finish off. I once again failed to hurt JP, he failed to entangle Matt and Matt failed to hurt me. However, Kelly finally managed to stab Matt in his left shoulder (the Hoplomachus' only weak point) and kill him. 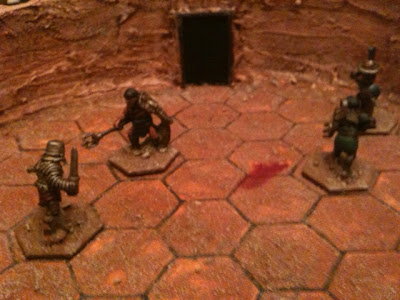 At that point we called it a day.

All in all an engrossing game, if a touch slow.
Posted by Kieron at 05:31