For King and Wortley!

And so I continue my journey into VBCW with the first element of the Wortley 'Dragoons' (named after the local regiment from the first English Civil War), a Local Defence Force raised by the Earl of Wharncliffe who has openly declared his support for the King (not the safest move in the heart of coal-mining country). Calling on ancient ties of fealty from the village of Wortley and his estate staff, the Earl has outfitted his militia at his own expense and is determined to hold his family's traditional holdings at all costs.
In the face of overwhelming opposition from the overtly socialist mining communities, the Earl of Wharncliffe has been drawn into Baron Arnold's (of the B.U.F.) fledgling royalist alliance. Although this agreement has secured a stronger ally and better ensured Wortley's position, it has tied the Earl's command to the unsavoury Blackshirts. The Earl is unsure whether the security of Wortley is worth making unpopular friends. 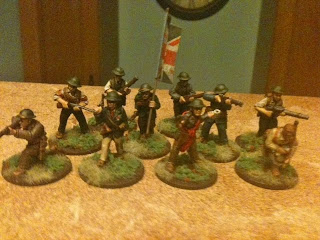 I've really enjoyed painting the models, I'm officially a Muketeer Miniatures fan. The models are packed full of character and humour. I took a step away from the B.U.F. because of the lack of humour, and I'm already amusing myself with these chaps. The banner was created using the Keep-Calm-O-Matic (with a quick print screen and crop in MS Paint) and it has helped me to decide that all the banners in my VBCW force will be based on the union flag (representing Edward's refusal to accept the break up of his realm). 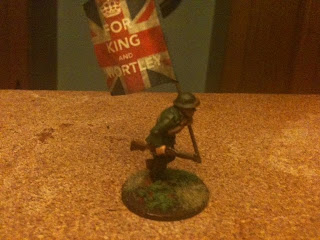 I've also done a tiny bit of conversion work. With a spare standard bearer I spotted an opportunity for something just a little bit daft. Nothing says VBCW more than a chap in a tin hat, draped in a curtain, popping a shot off at a passing socialist whilst calmly having a cuppa! 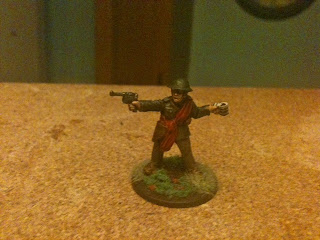 Supporting these two are the rifles; who are destined to be removed as casualties before the more important figures. The chap in the tank top is probably my favourite model in the unit. 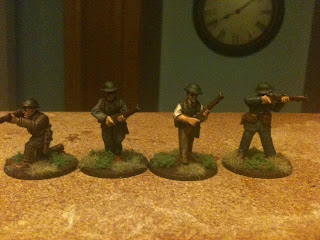 Then there are these chaps. 'A sergeant' toting a shotgun, an officer (who may be promoted to being the Earl himself given time), a lewis gunner, and a messenger on roller-skates funnily enough I feel this model is a bit too daft). 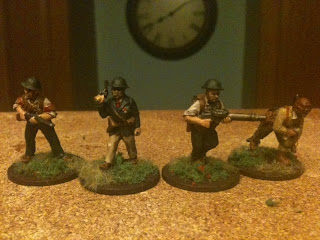 Next up is some heavy support for the Dragoons. And I mean HEAVY!
Posted by Kieron at 12:19