This is the first of my purchases from Varpatnak this to be painted. I didn't go to the show with any intention of buying a B.U.F. standard bearer, but when I found out that Gripping Beast had not brought and Woodbine Designs stuff with them (my intended purchase were some Chaps on the Hunt), I had a good peruse of the Musketeer Miniatures VBCW range and decided to buy some British Militia. However, two packs of four did not a suitable unit make and I was stumped unti I saw the standard bearers pack. Two of the models are suitable additions to the militia unit (one as a standard bearer and one as...well more on that later...) and the third was this chap, and he's more than appropriate to finish off my B.U.F. force. 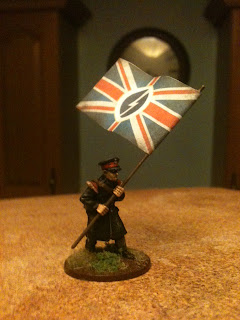 The flag is from the amazingly inspirational blog of 6milphil which has given me countless ideas and is packed full of VBCW eye candy; well worth a visit. I had felt that my Fascists were short of a flag or two (to be honest I was suffering from flag envy against Matt) and so I feel like I killed two birds with one stone by adding this chap and being able to field a full 10 man unit of milita once they're painted. 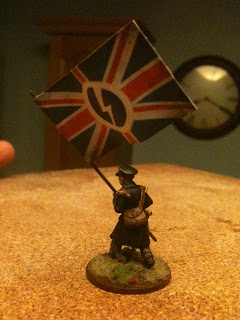 As for the model itself, I may be a Musketeer convert as after the bland lack of detail of the Plastic Soldier Company models (you gets what you pay for) this guy was an absolute joy to paint and arguably this model is the one with least character of the models I've bought. I've already decided to paint the militia unit in ones and twos as I think that they deserve better than a production line approach.
As a footnote, if you're wondering what Mr Cheaphammer is doing buying new figures, it's allowed. Due to the fact that I'm too fat to ride any of the horses at the stables my wife and I bought each other riding lessons at for Christmas, I got twenty five quid back to spend on my present. Thus were the funds found to allow me to go shopping! I've not only bought the militia, but I've also got something a little special that will be showing up here in a couple of weeks.
Posted by Kieron at 12:23