Given that I haven't played a wargame this week (we played the zombie boardgame 'Last Night on Earth' on Friday which is fun, but not really battle report material), and haven't painted enough for a decent post, I figured I'd treat you to the pictures from a game of Impetus Pete and I played a while back.

We're both new to the game so we used the Basic Impetus lists for Carthage and Syracuse. We're both also only beginning to build and paint 15mm armies for Impetus, but fortunately I happen to have 28mm armies for both (technically, my army is Athenian rather than Syracusan, but it's all Greek to me...).

Impetus allows for only a little terrain and so we played on a pretty open battlefield with a hill on one flank and a wood on the other.

I deployed my Hoplites as a line with Peltasts on each wing and the Skirmishers in front. The cavalry were on my far right where they would guard against a flanking manoeuvre by the superior Carthaginian cavalry. 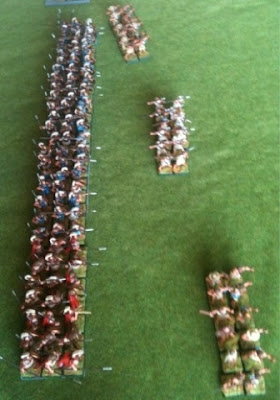 Pete deployed most of his infantry and Elephants opposite my Hoplites, some Numidians on his right and a flanking force of all his Spanish troops and another unit of Numidians on his left facing my cavalry. As I suspected, he was going to make a push to surround me. 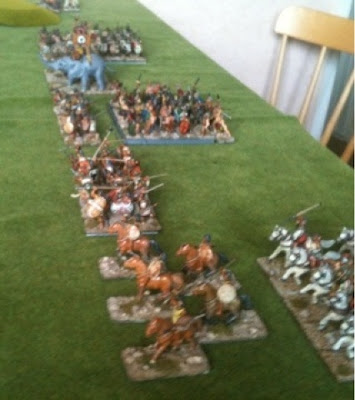 Initially all went well, my Peltasts on the left destroyed the Numidians will a well placed volley of Javelins and my Skirmishers harassed the Elephants as they advanced. I held my cavalry back as I knew they'd lose when they eventually tangled with the Spanish horse. 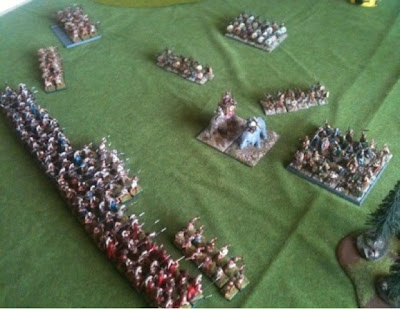 Through a hail of missiles, the Elephants made it to my lines but were successfully repelled. The ease with which my Heavy Infantry did this made me realise that I'd been focusing my fire on the wrong target. I should have been softening up the Gauls, who crashed into my General's unit whilst the Spanish foot thundered into my Peltasts to keep them out of the fight and the Spanish horse charged the Greek cavalry who'd been harassed by the Numidians. 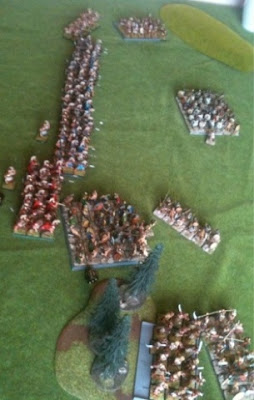 The Light Infantry fought grimly beneath the trees but as expected, the Greek Cavalry were scattered leaving the Syracusan flank wide open. However on the far flank the Hoplites, Peltasts and Skirmishers had mopped up the Libyans and Skirmishers and were slowly sweeping round to enclose the Punic rear.

Unfortunately, this happened too slowly as after much pushing and shoving, the Gauls broke the Syracusan Tyrant's bodyguard taking my army over it's break point and winning the game for Pete. 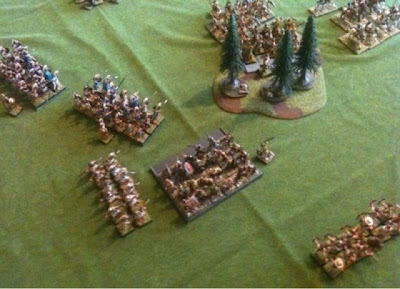 I'd only played a couple of games of Impetus prior to this game but I do like the system as it gives a game that feels like ancient warfare. The Syracusans and Carthaginians are historical enemies (although in the Sicillian Wars, Carthage didn't use elephants and had heavy chariots in their armies) which also helps these games.

My mauling taught my a couple of lessons which I should consider as I build the 15mm force:
1) my Hoplites can handle Elephants and Cavalry, missile fire should be focused on dangerous units of enemy infantry.
2) I should be more flexible in my deployment, butting my units against each other, actually restricts their movement.
3) Greek Cavalry can guard flanks, but don't expect them to do much other than die as slowly as possible. They're job is to keep the enemy out of the flanks of my army, not take the fight to the enemy.

That's all for now, however, I'd like to point out that I'm not being rude by not responding to comments, I'm still having PC issues and for some reason my phone won't let me make comments on blogs. I do appreciate the comments made, and thanks for reading.
Posted by Kieron at 06:58

Email ThisBlogThis!Share to TwitterShare to FacebookShare to Pinterest
Labels: Ancients