Firestorm: Lorraine - The Fall of Luxebourg

I'm aware that the title of this post sort of gives away the outcome of the battle report, however, as Matt and I set up for the game it immediately became apparent that the result would never really be in doubt. There were a number of reasons for my pessimism:

1) Matt won the initiative roll and chose, unsurprisingly, to attack Luxembourg (devoid of German Firestorm Troops) with two Firestorm Troops - I was outnumbered
2) Luxembourg was surrounded and out of supply. Another die roll later, all my Confident Veterans had suddenly become Reluctant
3) Matt got out his Paratroopers rather than his U.S. Armour, meaning that my minimal advantage of long range anti-tank firepower was of limited use, I couldn't outshoot him
4) Matt has recently been painting some artillery, which meant that hunkering down wasn't really an option either, I'd have to attack

The scenario was Encounter and the forces at our disposal were as follows:

I used the 2iC to form a Kampfgruppe with two of the Mortar teams to give me eight platoons and allow me to have more toys on the table to begin with. 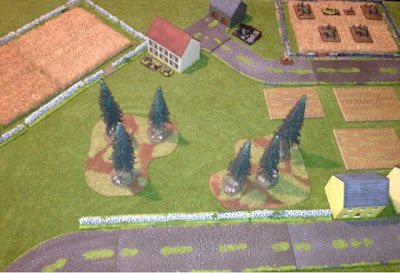 On his right, Matt placed one Para Platoon in the buildings holding the objective and one of his batteries in the cornfield. 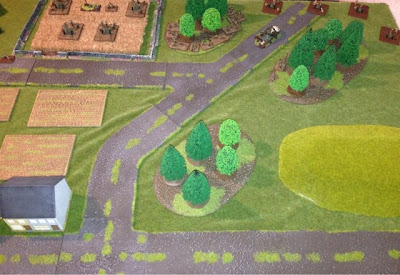 Adjacent to them were the RV Rifles holding the other objective supported by his other battery on his far left. 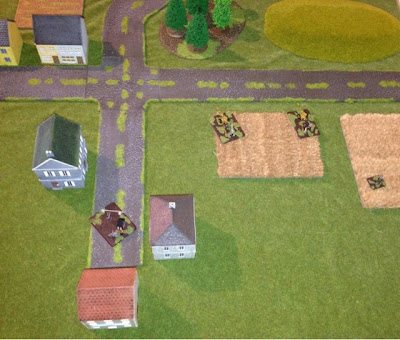 Opposing them on my right I had the PaK40s guarding against sweeping tank manoeuvres and a Panzergrenadier platoon in the buildings guarding an objective. 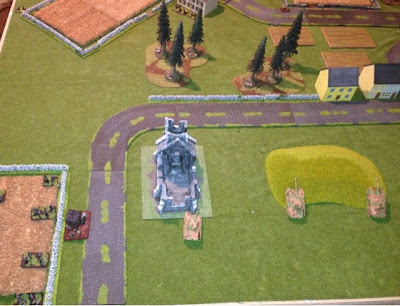 Meanwhile, on my left, another platoon of Panzergrenadiers hunkered down in a field on objective duty, whilst the Panthers all hugged cover ready to strike. 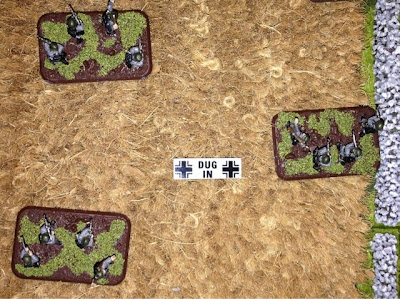 With neither of us willing to move out into the open, the first two turns consisted of an awful lot of digging in. 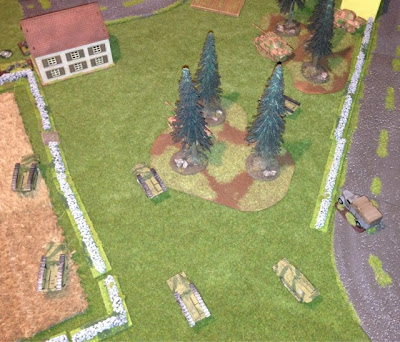 The first reserves to arrive we're my Armoured Pioneers, and aiming for a quick strike at the weakened American line, the Half-Tracks and Panthers swept forwards to the tune of Ride of the Valkyries. 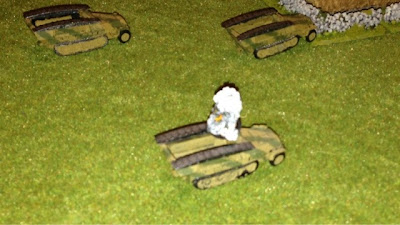 Only to be stopped in their tracks by a devastating bombardment that destroyed one Half-Track and pinned the reluctant pioneers for much of the rest of the game. 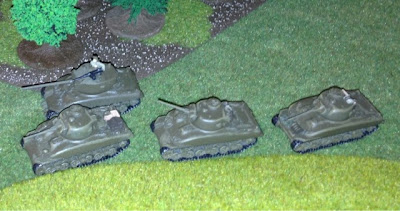 Arriving from reserve, the CT Shermans of the 7th Armoured knew that they were vulnerable to my big guns. 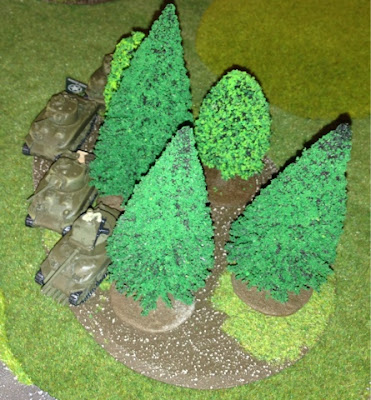 Therefore, they wisely hugged cover and concealment as best they could. 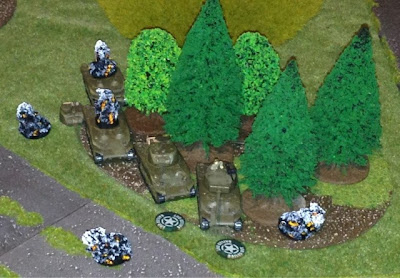 However, it was to no avail as Panthers, PaK40's, Marders and Mortars shot, smoked, bailed and blasted them to pieces and taught them the meaning of the term 'Firestorm'. 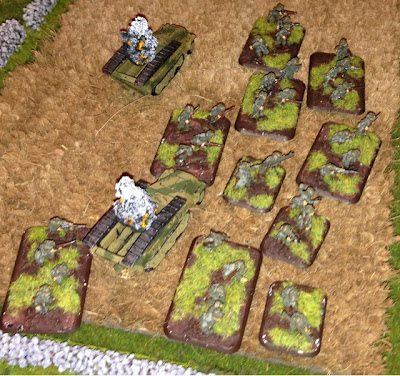 Parachute Platoons arrived from reserve in the right place and swept through the pinned down pioneers.

On the other flank the Rifles leapt forwards as well only to be halted by concentrated MG fire from the Marders. 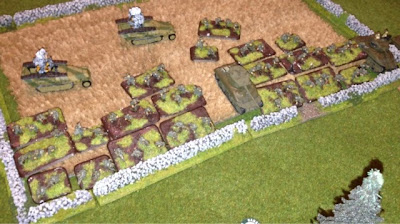 The Paratroopers massed behind a wall eyeing their next target. 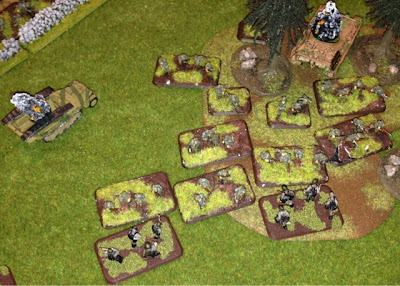 The now unguarded Panthers! Which were hunted to extinction. 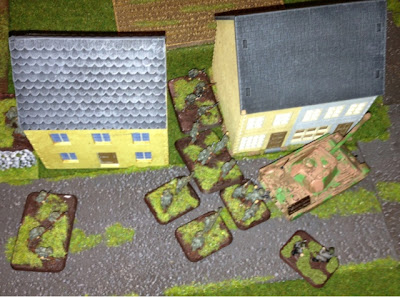 With the big cats destroyed, the 101st made for the Panzergrenadiers in the buildings. 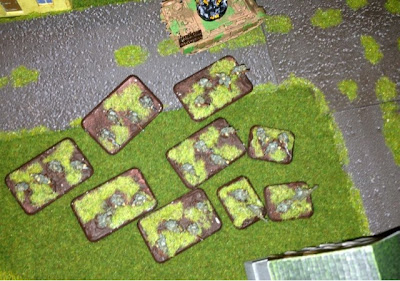 However, in their exuberance, the Paratroopers were caught in the open and concentrated MG fire and Mortar rounds gutted the platoon and the assault petered out. 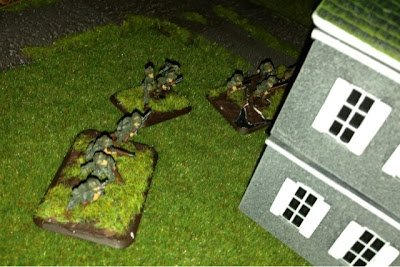 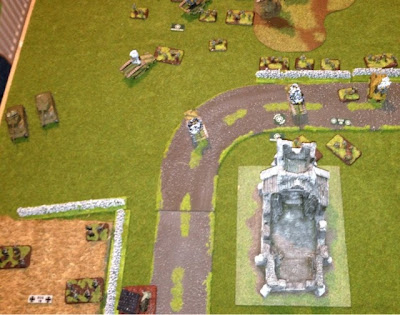 With only Panzergrenadiers and Mortars remaining Paratroopers and Shermans tightened the noose around the isolated objective to my left. 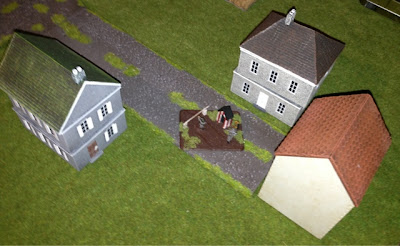 All the while, artillery pounded the village, slowly picking away at the remaining Germans. 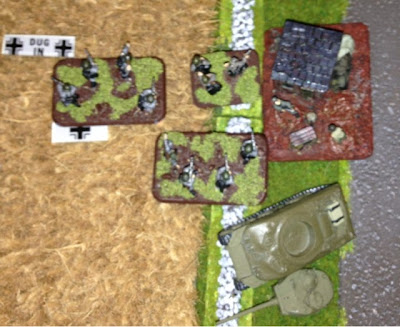 With a final assault, despite a valiant defence, the Shermans of the 4th Armoured finally pushed the Germans from the objective and won the battle, conquering Luxembourg.

I was always up against it in this battle and the result was no surprise. Being reluctant was a hideous handicap when you don't have numbers to make up for it. I'm not sure that my blitzkrieg assault was the best idea I've ever had as they were too easily stopped, however, I felt that Matt's artillery negated all out defence as a strategy as he was never going to let me shoot up his platoons across open ground when he could simply carpet bomb my positions. I knew I was going to lose this game and was pleased to have made it a 4-3 result.

I don't really capture it in this reported, but it's worth noting that this was a looooonnngggg game. Infantry on infantry clashes are rare in this neck of the woods a I felt that I lacked strategies for going after Matt's FV Paras.

In terms of the campaign, the U.S. have finally captured Luxembourg and have advanced the 7th Armoured to firm up th line. The German flank is looking conspicuously weak and their Panthers are facing an uphill struggle to the south. 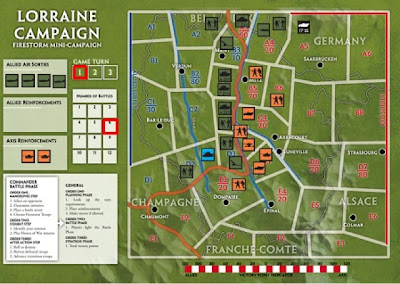 As a side note, this is the first post I've done on the Blogger app on my phone, so if it looks weird, that's why.
Posted by Kieron at 14:42