The Cabin in the Woods

I've been trying to get somebody, anybody, to play either a 7TV or 7ombieTV scenario. Last week, Matt and Wes relented and we arranged to play the Cabin in the Woods scenario from the 7ombieTV rulebook.

For this to happen, not surprisingly, we would need a cabin. 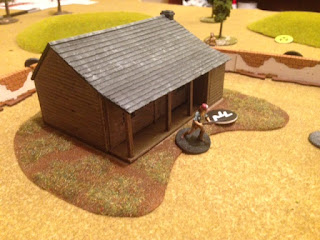 This is a Perry log cabin from their plastic set that I've had half done for ages and this game finally provided motivation to get it finished. It's a simple enough kit, but I'm a bit miffed that I couldn't find an effective way of making the roof removable; but given that there's no detail inside, it isn't too much of a problem.

The basic scenario is that a small group of survivors are trapped and surrounded and must survive a night of zombie attacks. I was controlling the zombie horde and Matt and Wes split the survivor force between them.

We had a bit of back and forth with the rules early on and got a few things wrong (such as the fact that unbarricaded walls don't slow zombies down) but eventually things began to move more smoothly.

Matt and Wes put together a defensive strategy quickly and began frantically searching for things to defend themselves with and firing wildly into the darkness. Initially they struggled to hit their marks but as the zombies got closer, and they learned about aiming, the walkers began to fall thick and fast.

Here's the point where the zombies had reached the walls. 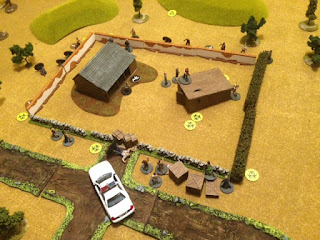 It was around this point that the survivors' scavenging turned up a butane tank and some Molotov cocktails which allowed Matt and Wes to launch an artillery barrage which tore a huge chunk out of the approaching horde, and when I finally got close enough to attack, event cards and poor attack rolling saw the survivors slip through my clutches (although the Natural Leader was reduced to just one hit). What's more, precious few zombies were returning from the dead and so the horde was eventually whittled down. 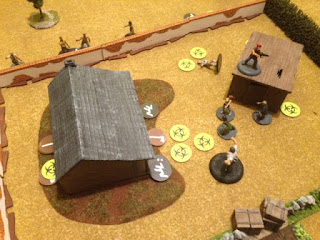 By the end of the game, the survivors were holed up in the cabin pouring fire into what was left of the horde and it had all gone a bit 'Zulu': "Front rank, fire! Second rank, fire!", and the survivors lasted the night and endured the zombie apocalypse without losing a single character...

In my defence, I was playing nice and mindlessly ambling towards the compound rather than trying to be strategic, and had we got the movement rules correct, I'd have been on the survivors at least a turn earlier and it might have got more bloody.

The main thing, though, was that it was fun and I'm sure I'll now be able to tempt them into playing some more 7ombieTV, 7TV or 7th Voyage scenarios in the future.

Also, I got the cabin done...which counts as winning!
Posted by Kieron at 09:36