After finishing the Morticians' Guild last week, I've turned my attentions to a new team. Initially I'd planned to build the Masons' Guild but a couple of issues arose to change my mind. Firstly, I was struggling to identify how to make their mascot, which is a baboon; I had thought about using a snotling or child, but neither of these are animals and it bugged me. Secondly, I was planning to use a plastic human Bloodbowl team I've had knocking about for years as a base for the male players, but they really haven't aged well and being one piece plastics, converting them was likely to be a pain. Thirdly, and most improtantly, my close study of the Guildball range recently has led me to the conclusion that if/when I actually buy a team, the Masons are the team I like the most and so it seemed daft to do them twice.

And so, in order to meet my target, I needed to choose a second team and I settled up the Union, a bunch of shady mercenaries who as well as playing for their own team, are also able to feature in other Guild teams.

This decision turned out to be quite straightforward as I had been intending to make a couple of Union players to provide some versatility in my squads and cover for players I didn't know how to make. I'd already picked out my base models for a few players, and these are the ones I've been getting on with this week. From left to right: Gutter, Mist and Snakeskin. (apologies about picture quality - the light is terrible today) 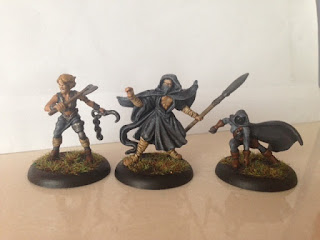 Gutter is a brawler, who is not only able to dish out damage, but also heals when she hurts others. Her hook and chain can be used to haul enemies closer, or inflict damage on everybody near her, including her own team. The models I've used is a Mage Knight character I've had for years (I've no idea why I had her, I never played the game). I had been planning to use this model for the Masons' captain, Honour, but when I switched focus she just as easily fit Gutter. A hand swap (from a LotR Rohirrim - smaller model = smaller hands better for female characters), a head swap (Wargames Factory Female Survivors sprue) and a bodged together hook and chain made for a straightforward build. 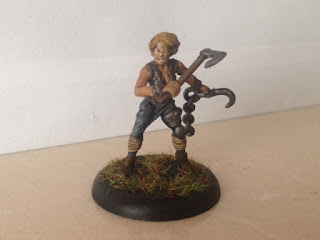 This elusive character strikes from the shadows, stealing the ball and evading pursuit. Mist is also available to play for the Morticians and was one of the Union characters I'd always intended to do as he can bring some much needed speed to their line-up. It's because of this that I've kept the colour scheme so similar to my Morticians team. This was also a simple build, using a D&D Githyanki with hand swaps from GW Wood Elves and adding a mask over the lower part of the face - this is not only matches the character design, but also covers the frankly terrible facial features on this model. 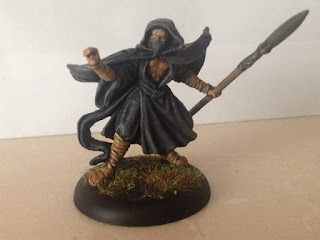 Snakeskin is also nimble and fast, but as well as being able to steal the ball, she can dish out damage, along with the poison condition, which can really hamper opponents. This probably makes her the most versatile of the three players I've done so far. She was also the easiest model I've done all month, and is simply a Heroclix Spoiler (a Batman character), repainted with a shortsword added. I actually have a couple of these models and one of them is due to be painted up to join my BMG collection. 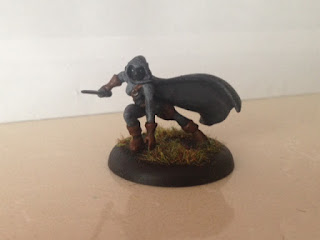 So that's three down and three to go. These three were the easy ones, and I'm having to be more creative to make my remaining players: Blackheart, Coin and Rage.