I've completed the first four miniatures in my kit-bashed Mortician's team for Guildball. I'm building a Mortician's team simply because it's the easiest one to do given that I've had a WFB Undead army for 25 years and so have plenty of appropriate bits knocking about.

Guildball requires six models to play: a captain, a mascot and four other players. There are no points values in the game, and so you can swap any players eligible to play for your team in and out as you wish. There are currently seven possible players for the Morticians, along with five Union (mercenary) players, who can be used by the Morticians. I'm only aiming to make six of the Mortician characters (mainly because there's one that I can't think of a way to build), and later I'll also be making some of the Union players.

First off the production line are Obulus, Dirge, Silence and Graves. 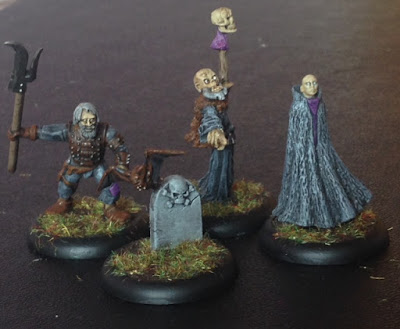 Here are the models I'm trying to represent. Just to be clear, I don't think my kit-bashed team are as good as the official miniatures (in fact, I will almost certainly buy an official team at some point), but I think they're good enough to enable me to play games, and for opponents to know which player is which. 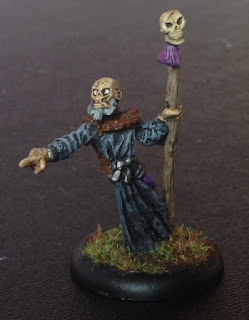 As the team captain and chief play-maker of the Mortician's Guild, I wanted Obulus to be characterful and imposing. As such, I decided to use one of the first miniatures I ever owned, a Liche from the Games Workshop 'Skeleton War Machines' boxed set, and gave him a head swap with a plastic zombie as it had more detail (and a beard...that was important). The age of the miniature is given away by its absolutely MASSIVE hands, but I still like the miniature, and the pose is suitable for a character with an ability called Puppet Master, that allows him to control opposition players. 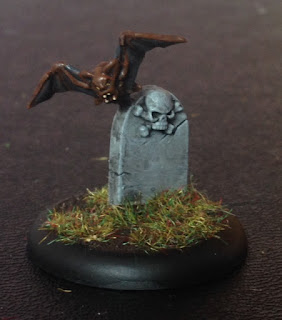 The first thing that you're likely to notice is that my Dirge is a bat, and not a Crow. I'm aware of this. However, I figured that just like a crow, a bat has wings (relevant to movement rules) and is somewhat Gothic and graveyardish in atmosphere. The bat I used is from one of my briefly useful Bat Swarms for WFB. I've pinned it to the gravestone to prevent having an obtrusive flight stand, and I hope that it looks like Dirge is flying over the gravestone. 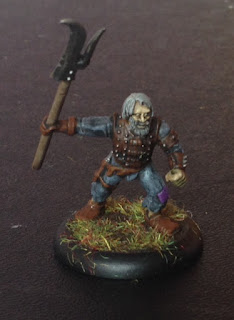 Graves seems to be a fairly combative character, who seems to be capable in both attacking and defensive rolls. He's been cobbled together using a combination of Empire Free Company and Bretonnian bits, along with an Ancient German head. I'm a bit disappointed with the positioning of the weapon arm, but I keep telling myself that he's in the middle of his 'Scything Blow' special move. I've used the same skin tone technique that I use for my zombies to give these character a deathly feel. 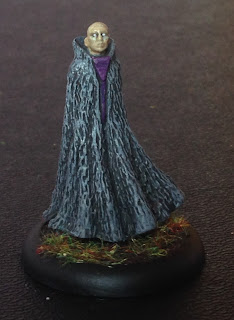 This was a simple repaint of a Wizkids Star Wars Miniature Game figure (one of the very few I still own). I'm really quite pleased with the face on this model as the detail were very shallow and I put a lot of work into shading the eyes, which like the rest of the team are blank to add to the deathly palour of the skin. My only concern with this miniature, is it doesn't have the exaggerated extremities of the GW figures, and so comes across as having a bit of a tiny head. Individually, though, I'm really happy with how he came out.

So that's my progress so far. I'm mid-way through the next team member, and then I've got some clipping and sticking to allow me to complete the team next week. I set my target to complete two teams (which is twelve models) this month, so it looks I'm current ahead of schedule...can it last?
Posted by Kieron at 11:00