Ready To Take On The World

The first part of my goal for this month is done!

I've completed all the necessary bits and pieces for the Batman Miniature Game Worldwide Tournament, the British leg of which is being held at Wollaton Hall, Nottingham, which was used as Wayne Manor in the Dark Knight trilogy.

Here's my team that's going to attempt to take on the world. 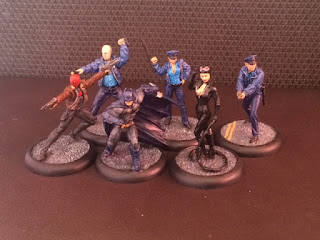 Batman (Arkham Origins) - a beast of a character (rightly so), whose goal is to put the hurt on as many enemies as possible with both Batarang and fist. His mobility and toughness, should keep him safe, but I need to stay aware of models that can put out a lot of hurt quickly, as I almost lost him to ninjas the last time I used him.

Catwoman - fast and agile, she's going to be focused on her Primary Objective: Loot trait, which enabled her to rack up between 10 and 12 VP's per game in the last tournament. She needs to avoid fights, and I need to remember that she can climb to escape pursuit.

Red Hood (Comics) - the eagle eyed will spot that this is a new model to my collection. Jason Todd was the second Robin, but was killed, resurrected, went mad, turned bad, then good and now pals around with Green Arrow's former sidekick Speedy. He's got the ability to deliver devastating close ranged attacks with his pistols, and so I'm hoping that he can ambush a high value Free Agent or take out a few henchmen per game. 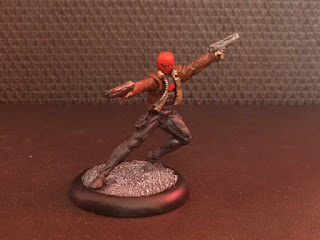 Agent Ron - The only cop in Gotham smart enough to carry a sidearm. Ron is largely a defensive piece, ideal for hiding behind an objective and taking shots at those who approach to closely. To help him in this, I've given him some extra ammo.

I've also had to get some new lampposts and sewers as Knight Models ruled that players could only use their products at their event. This is a fair enough decision, but I had a couple of gripes with it:


Overall, I feel I've had my arm twisted to buy something which is over-priced and I just don't think is good enough. But they're done now, so at least I won't have to fuss about future events. 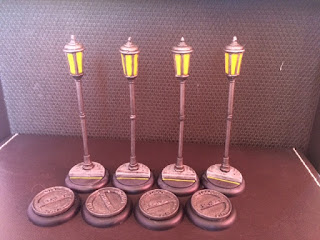 Finally, my objectives. KM made a similar ruling about these needing to be official, but back-tracked when folk pointed out that their objectives pack doesn't come with enough riddle objectives (which would require purchasing a second pack for a single objective) and that their decision was a bit boring and stifled creativity. To their credit, they adjusted the rule to say that objectives made by companies which are producing items for BMG without permission (such as Counter Attack Bases, who made the question marks I used for my riddle objectives).

Therefore, I set about making a point about creativity. I've always preferred my Ammo objectives to the official ones, so that was fine. I added some gold coins to my Loot objective, as it was the one I was least happy with. Finally I made Riddle objectives which not only contained actual riddles (and clues to their answers), but might possibly be making a cheeky point about crews which aren't available for the tournament either due to being unable to field a 350 rep crew, or not being released yet, even though they featured heavily in a recent, rather successful, console game. 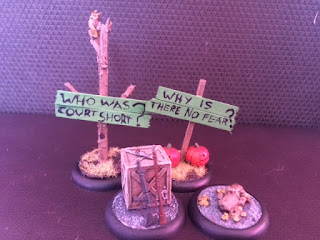 So that's me ready for the weekend. It's going to be a long day as it starts early and has unusually long gaps between games to allow people to fit in a tour of Wollaton Hall. If I'm honest, my hopes of overall success are fairly low as looking at some of the other crews people are using, I think I might find myself short-handed and out-gunned in some games. I'm aware that I was lucky with my match ups at the last tournament I went to, as in at least two of the games I had the gang better suited to the scenario. Even with Red Hood taking over from the ever useless Robin, I suspect that I'll still struggle to cause enough damage in some games.

However, the goal is to have fun, win at least one game and meet some people I've only spoken to online. Looking at the prize pool for the event, I suspect that everyone will be walking away with something, and in fact, if I'm in actually danger of winning, I might throw my last game, as I have no space for the first prize, which is a massive MDF Arkham Asylum! 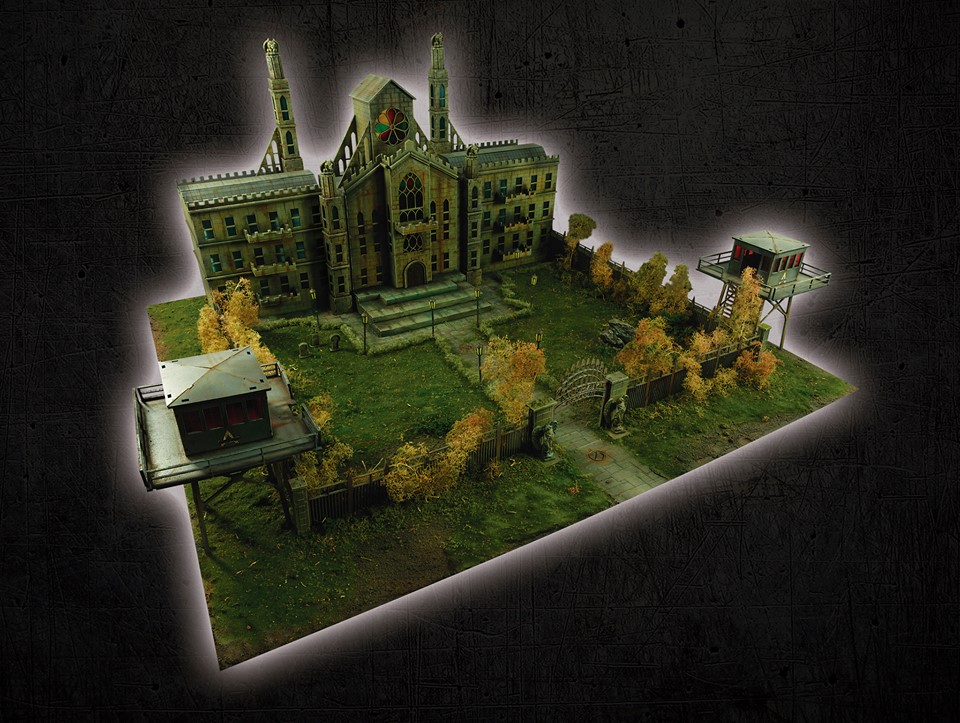 Tune in next week for a tournament report and and update on how I've got on with the Dropzone Commander models I wanted to get done. Same Bat-time, same Bat-channel.
Posted by Kieron at 01:38