Apologies for the hiatus, I've had a busy week.

So this month I'm setting my stall out to get my old Wood Elf Army for Warhammer Fantasy Battles rebased and ready for use in Kings of War. Here's my progress so far:

"But," I hear you ask, "doesn't Kings of War use the same basing conventions as Warhammer, rendering this job unecessary?"

Well, yes. However, there are a number of issues that mean that I feel that my Wood Elves need a little TLC. Firstly, there's the simple fact that it's easier to move multi-based models around the table, increasing the speed of an already fast game. Admittedly, I could use movement trays, but without a lot of faffing with magnets, they just fall out all the time. 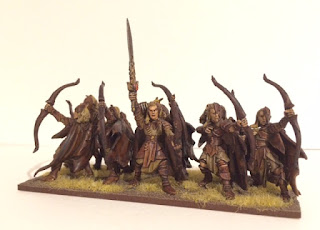 Secondly, long time readers of the blog may remember that I began a process of fixing, tidying and de-shining my Wood Elves following dropping the army. As I only ever got the unit above done, seeing as some of the models came off their bases all together, I figured that whilst I was varnishing and washing the models, so I might as well work on new bases at the same time. 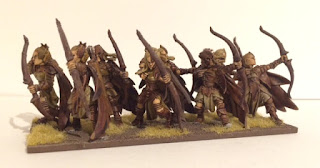 Another reason for the rebasing is economy. Kings of War unit sizes are determined by their footprint, and so for units like Kindred Gladestalkers below, whose rules clearly indicate that they are meant to be scouts, I'm able to spread them out a bit, as being ranked up doesn't fit the feel of the unit. 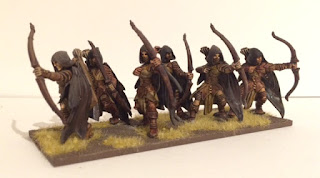 The final reason for re-basing is that some units don't rank up with the correct footprint. Two ranks of four Dryads would have the correct width, but not depth, as their new unit type, Hunters of the Wild, has a footprint similar to the archers. 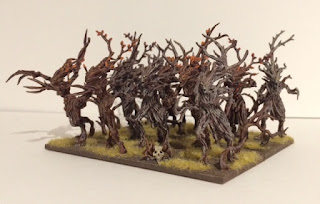 So with most of my infantry done (there's still a unit of  Wardancers/Palace Guard, and a motley collection of models that will make another unit of Archers), it's time to turn to my cavalry and monsters.
Posted by Kieron at 11:19