He Who Laughs Last, Laughs Biggest!

I've finished my Joker crew for the Batman Miniatures Game, and I've gone for a big finish. 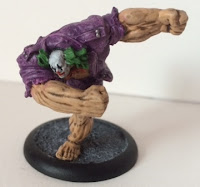 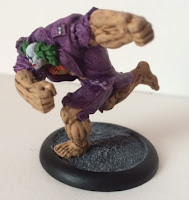 This is the Titan Clown, a big bruiser pumped up on the Titan drug, as featured in the Arkham Asylum console game, ready to add some punch to my crew. He's big, fast and hits hard for a relatively low reputation cost. What's more, as a henchman, he can be given equipment, such as Neurotoxic Drugs to make him even faster, or even a Bat-Claw, to allow him to chase down those pesky rooftop loitering heroes. Next time I see Arrow, he's getting a clown to the face!

Titan Clown is big, but I wanted bigger... 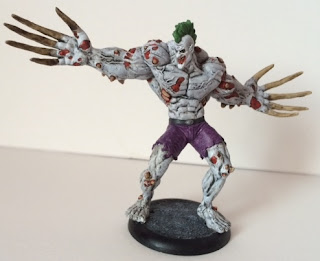 This massive beast of a model trades Joker's usual trickery and shenanigans for raw killing power. He encourages a more direct style of play, and is vulnerable to enemy shooting, but he should pretty much destroy anyone he gets into base to base contact with. I'm tempted to take him to my next tournament, rather than Arkham City Joker, simply to avoid the tuts that usually great shooting round corners, one shot kills and henchmen who can rearrange their counters. I also imagine that he'll be a blast to play if backed up with some other fast killers like the Titan Clown and Victor Zsasz.

Both of these models were surprisingly quick to paint, despite their size, and on the subject of which, here's a scale shot with a regular model. 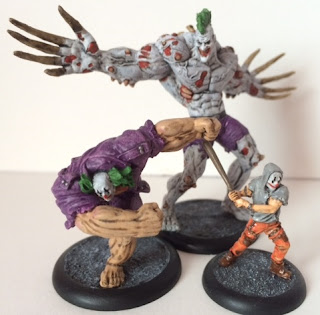 So, I've met my goal for the month. Hurrah!

I've still got a second hand duplicate Ringmaster to work with, but I'm waiting to see if I can get my hands on one of the tournament exclusive character cards for Six, an upgraded Shield Clown, in order to do a conversion, so he can wait. I can now do several variations of a 350 rep crew for the Joker, so I'm happy that I don't need to be adding anything more.

Next month, I should have a bit more time to paint, so I'm going to set myself a slightly larger target, but you'll have to wait and see what that is.