This weeks survivors are miniatures I picked up at the Derby World Wargames Show a couple of weeks ago. After deciding to sell my Wargames Factory Female Survivors, I decided to pick up a few female models for my zombie games. Naturally, I headed straight for Bad Squiddo Games (formerly the Dice Bag Lady) and her eclectic range of sensibly dressed female miniatures, and picked up these two. 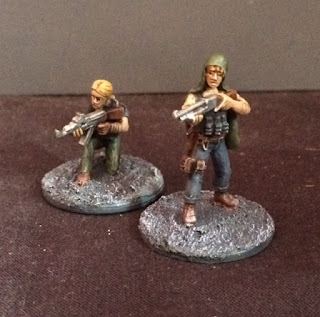 They are a pair of twin mercenaries from Across the Dead Earth, a post-apocalyptic game, apparently called Aysha and Nisha (not sure which is which). I'm not usually a fan of post-apocalyptic miniatures, with their mohicans, propensity for fur and lack of trousers. However, these two are reasonably attired for a more realistic (ignoring the zombies) setting. They are perhaps more experienced survivors, but not beyond the realms of believability for games set across the pond. 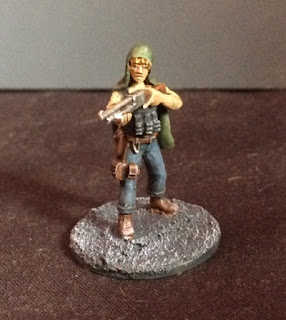 Aysha (or Nisha) is sporting a pump action shotgun and a sidearm at her waist. I really like how both of these models are clearly female, without the usual wargaming habit of overdoing the 'curves'. It's something that works fine on comic book characters, but is a little out of place in a zombie apocalypse (unless you're in an animated Japanese high school). I also like the little details on the model, like the carabiner on the belt. 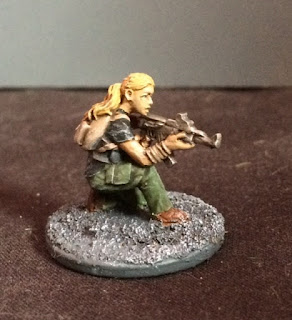 Nisha (or Aysha) is packing an AK-47 and is ready for action. As these two are meant to be twins, I tried to keep the colours I used similar, without making them too uniform. I think I've succeeded in this and the two of them look good together. I'm not sure what 7TV profiles I will used for them, but they should work as Survivalists without too much trouble.

Next up is a model I was originally going to post on his own, under the heading, 'Soul Survivor'... 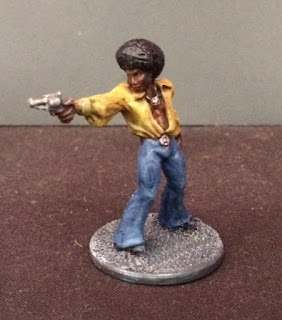 ...however, unless the apocalypse has been going on since the seventies, he doesn't really fit the Zomtober theme properly, and I promised to be sensible this year.

The model is the Bones version of Horace 'Action' Jackson from Reaper; another model I picked up at Derby. I found that due to the plastic used in the Bones miniatures, I had to put a bit more effort into highlighting than I usually do, as the washes I use had a tendency to pool quite badly on the model. I chose the yellow and blue colour scheme as a nod to the original costume of the Marvel character Luke Cage, as I'd just finished watching the latest Netflix series when I painted him.

He's got 'Flamboyant Agent' written all over him for Spy-Fi games of 7TV, however, I'm also rather tempted to use him as the beginning of a villain cast and make the Disco Boys from the film 'Mystery Men'.

Finally, returning to the theme of the post title, I've finally got my hands on some Dropfleet Commander models. Although my Kickstarter delivery hasn't arrived, Wes recieved his early, and as we'd planned to swap bonus sprues, he kindly gave me some Scourge ships to get working on whilst I wait. 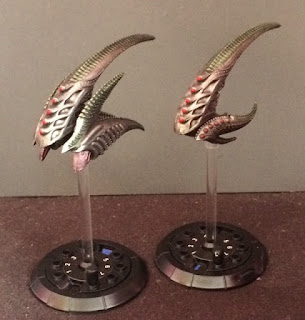 The ship on the left is a Gargoyle Class Strike Carrier, which is apparently for dropping troops on important locations, whilst the one on the right is a Harpy Class Frigate, which seems to be the bog-standard Scourge frigate for supporting  the bigger cruisers. As I'm due to receive an entire armada of ships fairly soon, I've kept the painting really simple, using washes over silver in a scheme I've flagrantly nicked from someone on the internet.

I'm really happy with how theyve come out, and I'm fairly sure I'll be able to replicate this scheme fairly quickly to get the fleet done at a decent pace. I've actually painted a second one of each of the ships, but I don't have any more of the connector widgets at the moment. Expect to see many more similar ships soon.

Zomtober is drawing to a close, which means two things. Firstly, our traditional Halloween Weekend zombie game is in the offing, and we're planning something a bit more complex than usual. Secondly, I should probably do some zombies!
Posted by Kieron at 08:05