Having finished my Teenage Mutant Ninja Turtles last week, I wanted an excuse to get them on the table. With a distinct lack of gaming opportunities I turned to the solo option, and the best bag guys for solo games: Zombies!

In search of some inspiration for a game, I stumbled across not only the excellent title card above, but also a short motion comic that serves as a nice introduction to the game. LINK 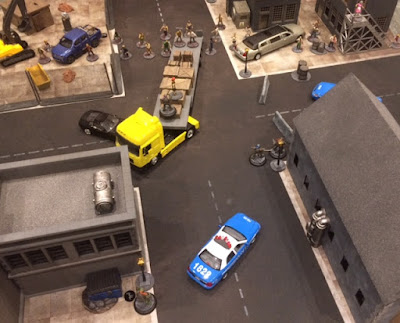 The scenario was The Hit, and the Turtles would be joined by a VIP representing April O'Neil (in the TMNT PDF, April is a separate character, but I didn't want to worry too much about another set of abilities for this game), and was positioned in the centre of the board. As I was playing solo, I set the objectives (representing zombie spawn points) first and dice randomly for table edges. 24 zombies began on the table, but at the start of each turn I would draw from the 7ombie TV spawn deck for each objective still in action. I also swapped the zombies 'tactics' trait for the solo rule from 7ombie TV where all unactivated zombies gain a free move action. I used the zombie activations on the zombies closest to the enemy.


With a big chunk taken out of the zombie horde and all the spawn points sealed, the game was effectively over before the end of Act Two. Although I had fun, the zombies needed a bit of a boost for solo play. In retrospect, it would probably be wise to give them an additional attack or defence dice for each additional zombie in base contact with their intended target, as this would allow a swarm to bring down a hero - in this game the Turtles were never really in danger.

But I've given the Turtles a run out and I'm now aware of their capabilities. Michelangelo is the scout, both fast and resilient. Donatello is defensive, able to hold back foes. Raphael is primed for jumping into the middle of the fight and taking on all comers, especially big hitters. Leonardo is the leader and is able to take down multiple foes - he does well on crowd control.

It will be interesting to see how they do when their opponent can think.