The Spoils of 'Victory'

However, back in the summer I had the good fortune to finish third in a tournament at Titan Games in Lichfield. Unfortunately, the prize pack was late arriving and so summer was over and I was back at work before I got my hands on my prizes. Due to the fact that there were only six people in the tournament, the haul for finishing third was better than usual (as I mentioned, 'good fortune') and I ended up with a couple of exclusive character cards and two packs of henchmen.

And so these are what I've been painting... 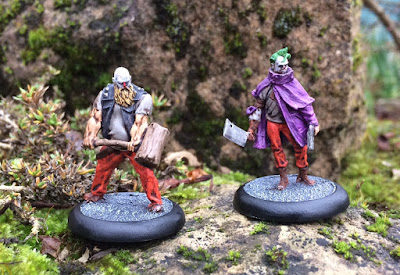 First up, for the Joker crew (unsurprisingly), are the Elite Clowns: Borgon and Asker. Both of these guys are tougher than Joker's usual mooks, but still benefit from the Trickster trait Joker grants them. They add a bit more backbone to the crew, without having to rely on Blackgate Prisoners or Free Agents. 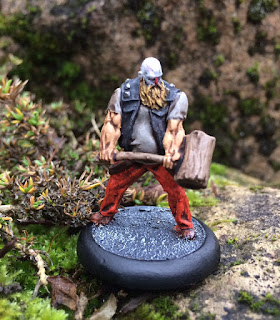 Borgon, as you might guess, is a chunk of muscle who as well as having high Attack and Endurance values (for a henchman), adds to these with Sturdy (which means he doesn't lose action counters as quickly when wounded) and Brutal (increasing the likelihood of a Critical Hit or a Knockdown), along with a damage dealing hammer. He won't last too long against a big hitter like Batman, but he's more than a match for most henchmen in the game.

I've ignored the 'official' paint scheme (which has him in red and blue with a stripy hammer) in favour of having him fit in with the rest of the orange clad crew. I like the idea that he's a biker who's fallen in with the Joker's men whilst inside.

Painting his makeup was a bit of a chore. I've found this with all the Joker crew that have makeup rather than masks. The clown designs I've tried end up (as they do in real life) stopping their faces looking like real faces. Each time I mucked it up, I added more paint and I was in danger of losing detail. I'm not overly happy with how it's ended up, but it's fine for arm's length on the tabletop (don't look too close). 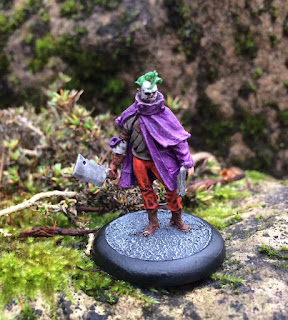 Asker is a bit more versatile, being armed with both a pistol and a meat cleaver. Although dangerous and effective, he suffers from the same 'jack of all trades, master of none' concern that many versatile characters do. Fast, Bloodthirsty, Psycho and his meat cleaver seem to imply that he should run as fast as he can towards the enemy and wade in. However, Defence 3 and Endurance 6 point to this being a less than successful strategy, along with it negating the effectiveness of his pistol, which always seems best used to lie in wait for the enemy. He'll take some planning to get the best out of.

Again, I've brought in the orange of prison issue fatigues, but generally kept to broadly the same colours as the official colours (without the swirly green pattern on the cloak). The purple on the cloak ties in to both Titan Clown and Joker himself. I see Asker as Joker's body double, allowing him to mislead and confuse the Dark Knight as to his true location.

Like Borgon, the makeup was a bit of a pain. Not perfect, but good enough. 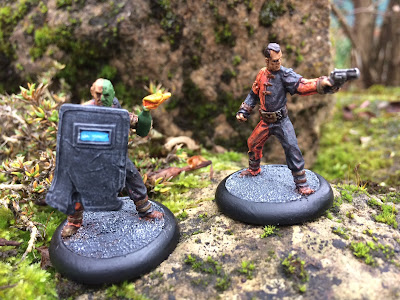 The other pack of henchmen were for the Two Face gang, which I haven't painted anything for in a long time. Perhaps the hardest thing about painting these two was matching the scheme from some time ago, however, I think I've got it about right.

Bob is the oddly posed chap with the pistol and I've avoided adding any highlight to his hair to hide a fairly chunky mould line down the side of his head. For once, I was glad that KM had done a separate head for a model because otherwise the line would have been right down the centre of his face (although in a Two Face gang, that may not have been a massive problem). 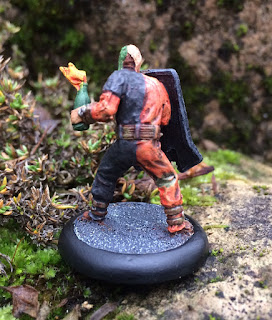 Tot is armed with a petrol bomb and a shield and is wearing a latex mask, which nicely has a gap at the back his head to indicate this. He will probably be employed in the same way I use my Clown with a shield, as an objective grabber. The petrol bomb, with only a single shot, seems situational at best, although it does give him something to chuck at passing shambling mounds of vegetation.

Like almost all of Two Face's henchmen, Tot and Bob are low points with no particular talents. They are meant to be used en masse as a true swarm. 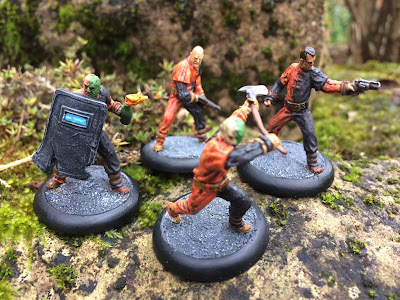 Through different circumstances, I now have four Two Face henchmen, but no Harvey Dent (apart from a Clix version). I suppose I'm going to have to buy him...or ask Santa...
Posted by Kieron at 11:36