7TV: Scooby Doo and the Gruesome Ghoul of Gatorsburg

I appreciate that I've been quiet recently. I've been a bit out of sorts with the whole blogging thing. I think it might be because I binged a bit in April and over-faced myself. Anyway I'm back now and here's a game I played with Mike a couple of weeks ago as I was keen to get Mystery Incorporated on to the tabletop.

We played 'The Search', which is a scenario in the free PDF from Crooked Dice, in which Mystery Incorporated and the Crystal Cove Police Department (played by me) hunt for clues surrounding the disappearance of a bystander (Father Addams, the local priest), whilst the baddies, led by the Gruesome Ghoul of Gatorsburg, try to stop them. I had to grab the objective tokens (for which I scored points), and each time I did I got to roll to see if I'd located the missing priest. Once found, I would need to keep him safe and get him off the table.


Scooby and the Sheriff were both found dazed, and information pointing the location of Father Addams was found, although Mystery Incorporated couldn't claim credit for his rescue. The Gruesome Ghoul was unmasked as Terence the Choirmaster, who was trying to force the church to repair his organ. The CCPD are going to face some serious questions about their excessive use of lethal force, as the 'ghosts' and 'zombies' turned out to be the hypnotise members of the choir...oops!

Despite the fact that by the end of my third turn I'd found three of the clues and begun to slaughter the zombies, the game ended up being quite close. Fred's intricate plan was foiled by the Gruesome Ghoul being unmasked, forcing the rest of the cast to flee, ending the game early. I didn't manage to locate the priest, which meant Mike grabbed enough points to bring the final score to a knicker-grippingly close 8-7 to Mystery Incorporated.

The game was loads of fun, and the Scooby Gang are suitably thematic in their abilities. The amount of gadgets they get seems odd, but I suppose this reflects the wackiness of their adventures. The only thing missing from the game, as you can see, was the Mystery Machine, and so I've recently rectified that issue with a small purchase... 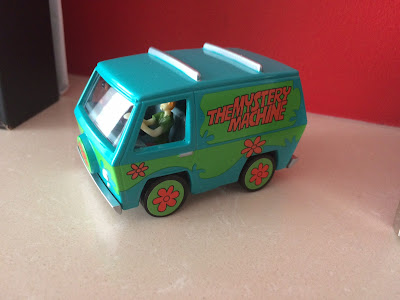 This is a Hot Wheels Elite 1:50 scale diecast model and is really good in terms of scale. My only grip is with Shaggy and Scooby being in the front seats, so I may need to do something about that.

Otherwise, you can look forward to it showing up in the next episode.

Scooby-Dooby-Dooooooo!
Posted by Kieron at 14:21