I've had another busy month, so I'm just getting back to painting and blogging. I needed something fun to ease me in and I had nothing more fun sitting around than my Scooby Doo cast for 7TV that I picked up from Hasslefree Miniatures at Salute this year. 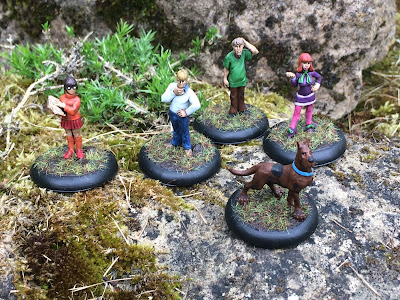 I've discovered that cartoon characters really suit my painting 'style' as I tend to prefer bright block colours. The Scooby Gang have these in abundance, and I really enjoyed doing them. I even...gasp...mixed the lilac trim on Daphne's dress! These were some of the quickest and most fun models I've painted in a long time. The models are simple and well sculpted, and I'd highly recommend them.

I also finished off the Death Worm for my Mad Science cast that I will be taking to the Wargames Illustrated 7TV day in July. 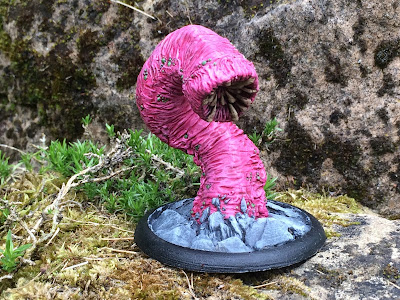 The Death Worm is actually a Purple Worm from the Reaper Bones line, and it's chunky thing - the base it's on is 50mm diameter. The paint job is really simple and done to match the spawn in the rest of the cast, which also makes it usable as a Kraathatrogon - a giant mutagen producing alien space worm from the Teenage Mutant Ninja Turtles cartoon.

A fun extra, I discovered that there have been giant worms in Scooby Doo too, which gives me a chance to use the two together. 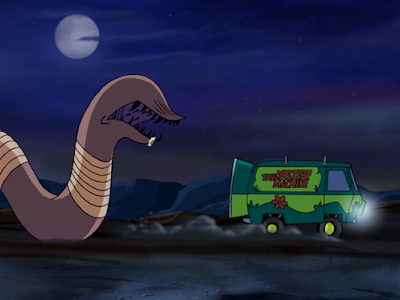 Now I really need that Mystery Machine...
Posted by Kieron at 11:48