I’m not entirely sure how I’d got to a position of having so many half finished models on my desk, but I’m quite enjoying clearing my painting queue. It’s giving me a really eclectic collection of things to paint, and a little tour of all the various projects I have on the go.
This time it’s my ad hoc Marvel project and my heroes for hire: Jessica Jones, Colleen Wing and Misty Knight. 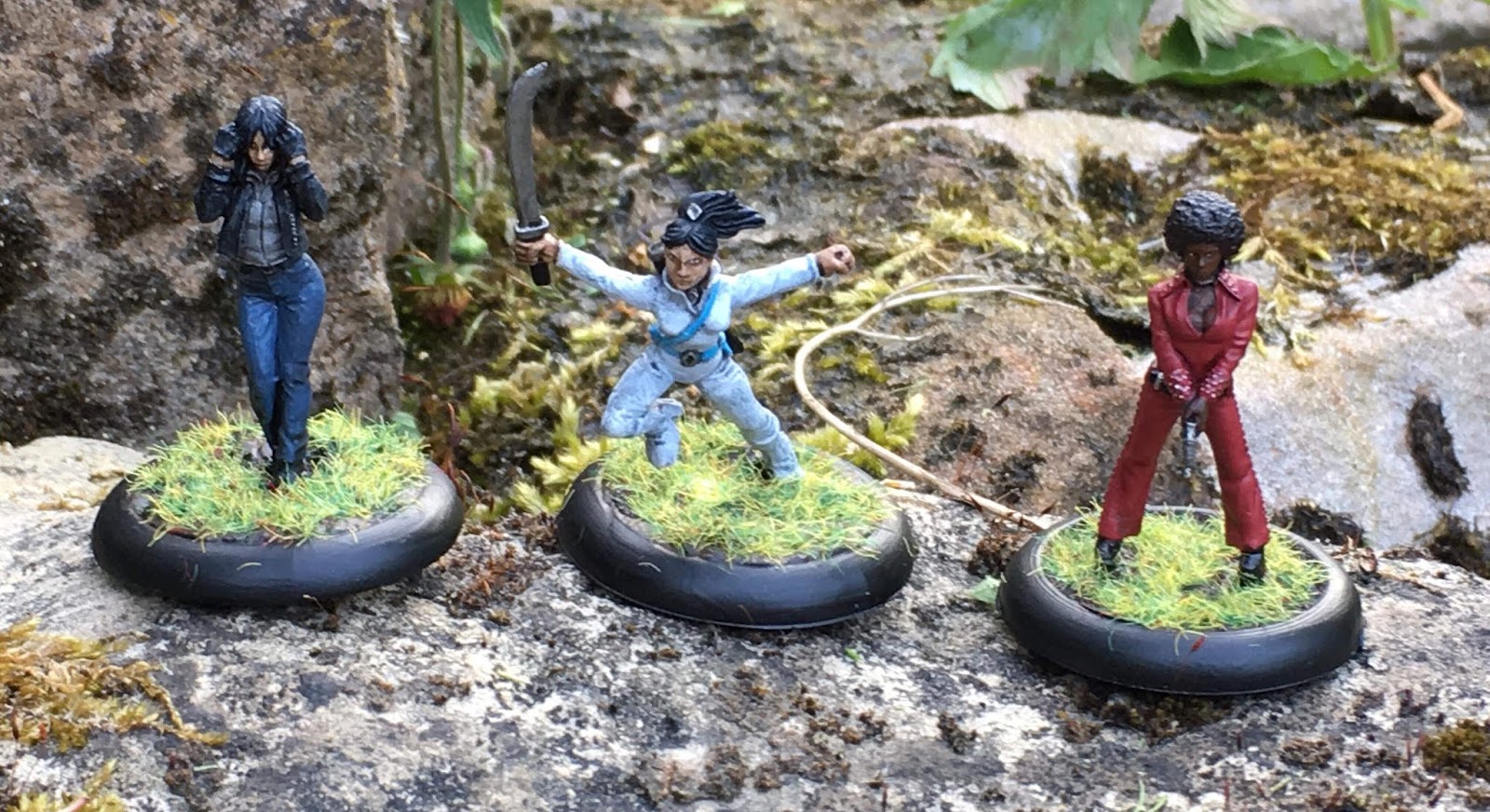 All three of these are characters I’d never encountered until the Netflix Defenders shows appeared, and so my versions are based more on the characters as they appear in those shows, rather than the comics.
Jessica Jones is a Hasslefree sculpt, which is clearly based on the Netflix’s show. However,  when I first saw it, I didn’t make the connection as I assumed the model was adopting an odd boxing pose. Only later did I realise that she’s actually in the process of putting a hood up.
I kept the colours simple (which is my way) and quite dark, which suits the Netflix rendition of the characters. I messed up the eyes (which as ever, looks worse on the photo than I can see in real life), but the fact she’s looking down helps to disguise this well.
Colleen Wing has red/orange hair in the comics, but as I said, I’ve never read a comic with her in, so I’ve gone for a look based more on Jessica Henwick, who plays her in ‘Iron Fist’. In line with this, I’ll probably make her available to be used by The Hand when I get round to making 7TV cards for them. The model is one of the Daughters of Shiva from Crooked Dice.
In terms of outfit, the comic book Colleen Wing wears a white catsuit with ‘whupass’ (seriously) written on the thighs in pale blue. This costume is referenced in Iron Fist when she wears a white tracksuit to take part in some cage fights. I’ve gone for white clothing, but rather than add blue details to the clothing, I’ve used it for the belt and straps that appear on neither version of the character.
Using another Crooked Dice model, this time and Angel of Justice, Misty Knight was very straightforward to paint.
I’ve gone for the all red outfit she wears in the comics as, so far, the character that appears in Luke Cage is just a cop and doesn’t have a specific outfit as such. You have to look closely to see that I’ve given her a bionic arm, as only the hand is showing. The studs were tricky, and I’ve made a couple of mistakes, but not enough to worry about.
Whilst we’re on the subject of Marvel, I need to add this guy, whose been painted for months but just needed some static grass on his base. 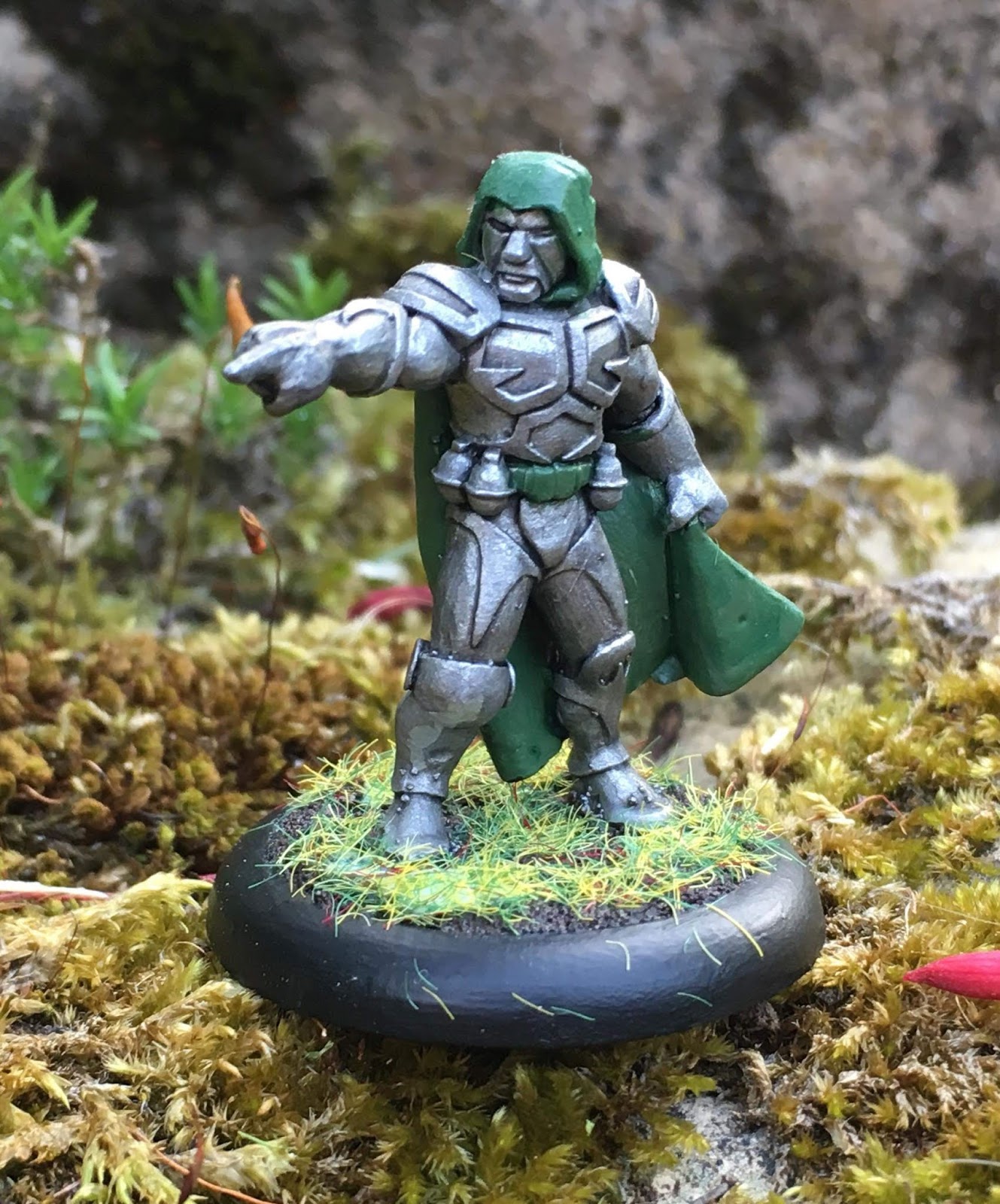 Doctor Doom.
Although the costume is not really right on this Crossover Miniature, it should have a green tunic too, with the right colours he’s close enough that it’s obvious who it’s meant to be.
I bought this figure with the intention of using him as Doom a long time ago, but he got caught in the hiatus this project suffered when Knight Models released their short lived Marvel range. When it became obvious that the line was not going to last, and I want going to buy them all, I returned to my ad hoc Marvel project and this Doom was back in favour.
I suppose that the reason he’s taken so long to finish is that I still don’t really have an outlet for this project. There are various character building options out there, including 7TV, but this is likely to be something I do solo, and so I’m not sure that these options fit.
7TV remains the most likely option, and it’s a system that really suits low powered characters like the Heroes for Hire, but I’m not sure how it would cope with a powerhouse like Doctor Doom.
I need to do some thinking.
Anyway, that’s my quick wins done for now. Tomorrow...He-Month 2: Masters of the Juniverse!
Posted by Kieron at 00:13