“What a lovely day!” 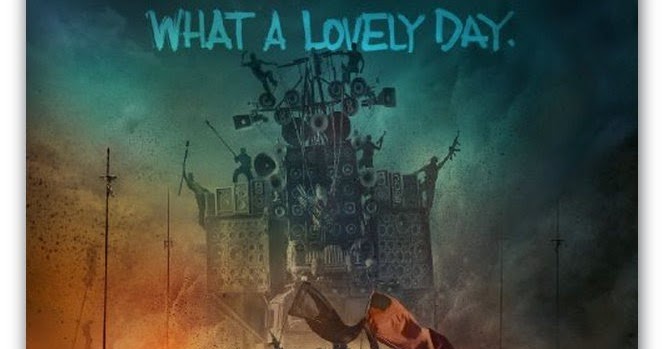 Today I attended the 7TV: Apocalypse day run by Wargames Illustrated at the Wargames Foundry Shop in Nottingham, the purpose of which was to try out the new vehicle rules.
It was a lovely day, but before I get to all that, I’d like to take you back a few weeks to when I was wracking my brain about what cast to take as I don’t really do post-apocalypse gaming (unless you count zombies).
After much faffing around with ideas I settled on using things that I already had that might suit an apocalyptic setting. It seemed that of my miniatures, the group that would be most likely to exist in such an environment in a tricked out vehicle was HYDRA, led by Red Skull. This was mainly because it was likely that HYDRA had caused the apocalypse in the first place. 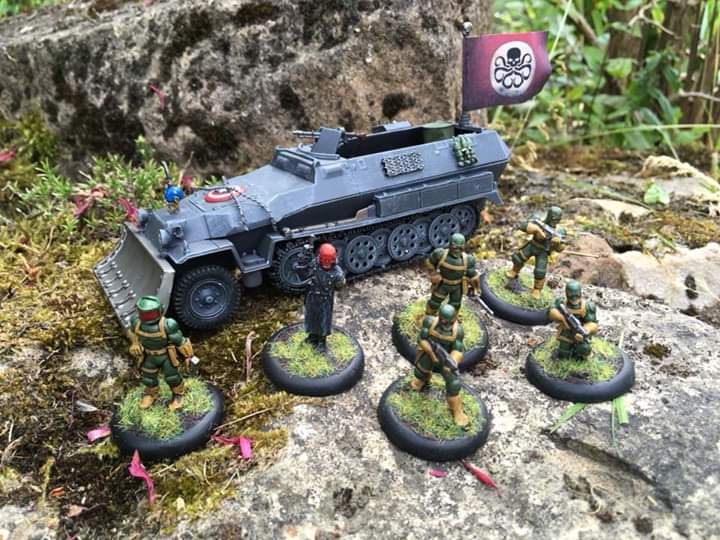 Regular readers of the blog will be aware that I’d painted Red Skull and some HYDRA goons a while ago, but I needed to add a suitable driver and so quickly painted up a helmeted goon to finish up the cast. 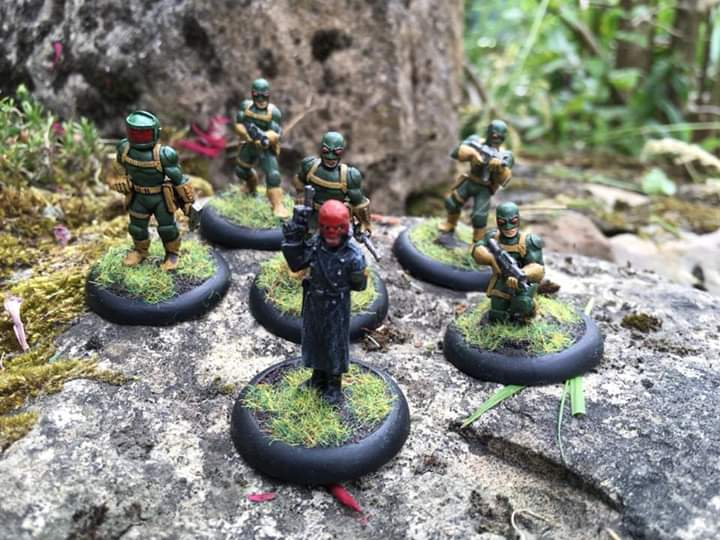 For my vehicle I made use of a WW2 German halftrack (HYDRA are nazis after all) that I’d bought without realising it was 1/43 scale and too large to use with Bolt Action. However, if Captain America: The First Avenger taught me anything, it’s that HYDRA like BIG vehicles. 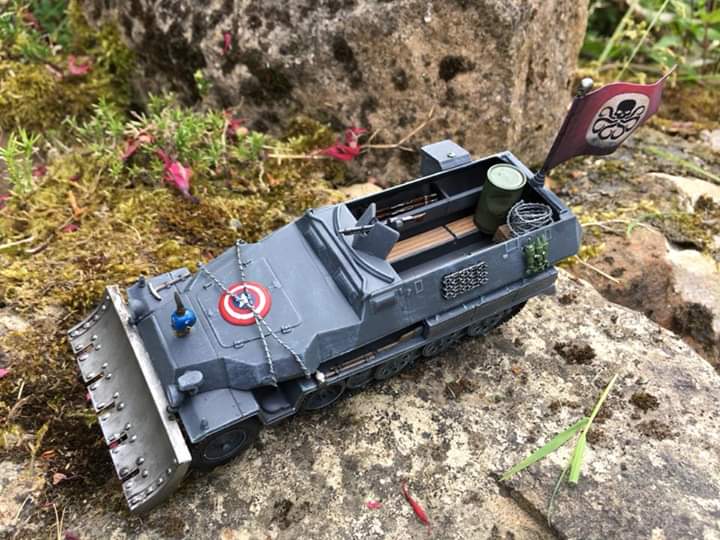 The basic vehicle was quite bland looking, but I added a few items from the bits box (such as a bulldozer blade) to the outside, and a pile of stowage inside. 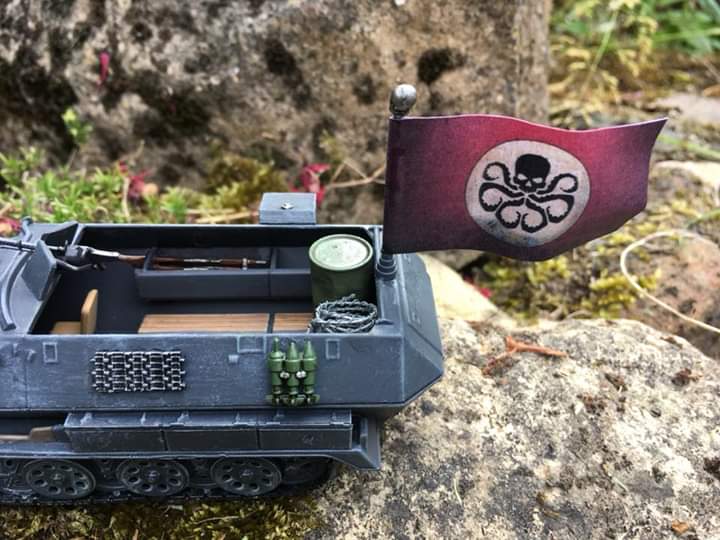 To add a HYDRA theme to the vehicle, a massive flag was a given. However, given that in my head, HYDRA had caused the apocalypse, this could only have been achieved if Red Skull had finally got the better of his nemesis, Captain America, and so I also added his shield as extra armour and his head as a hood ornament. 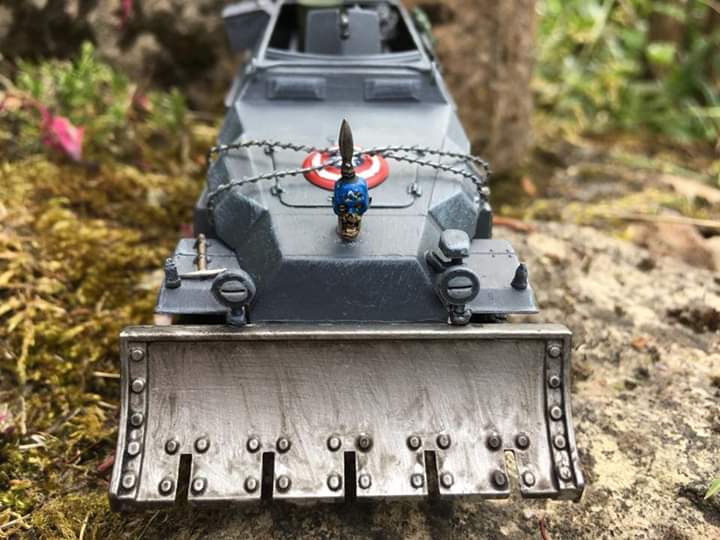 So with my crew ready, Matt and I piled into the car to get to Nottingham in time for some post-apocalyptic fun.
Game 1: The Race
Opponent: Simon
Cast: The Vuvalini (Mad Max: Fury Road) 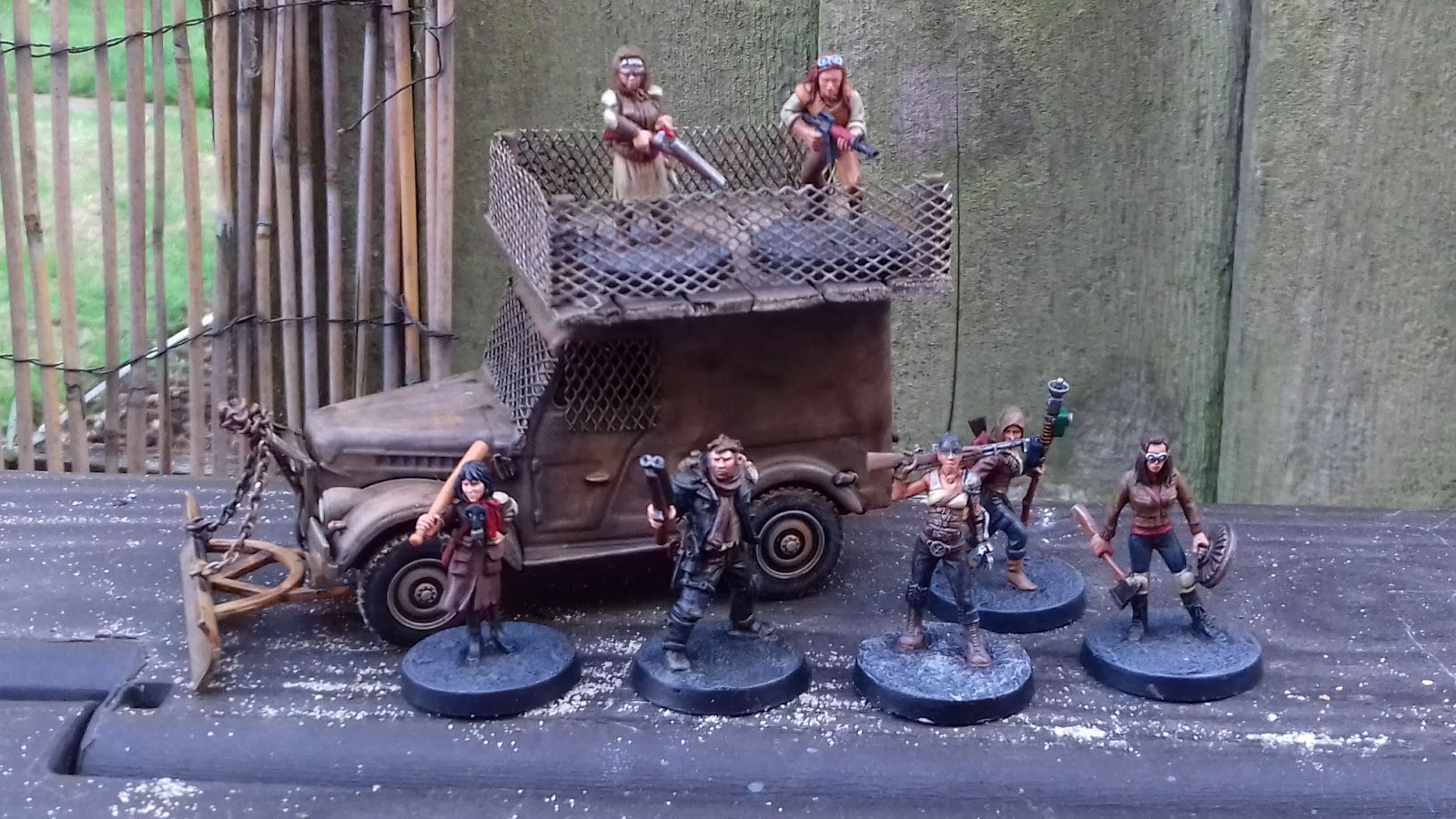 Simon (of Brummie’s Wargaming Blog game) and I haven’t played in quite some time, due to not living near each other and us both stopping attending BMG tournaments, and so when we were given a free choice of opponents for the first game, we took the opportunity to catch up whilst shooting the hell out of each other.
His cast was based on the Vuvalini (or Many Mothers) from Mad Max: Fury Road, and featured Mad Max, Furiosa and a mixture of Vuvalini Wartiors and Black Thumbs (mechanics). 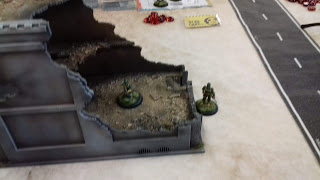 The game began with the usual scramble for objectives and countdown cards being used to make each other’s lives difficult. 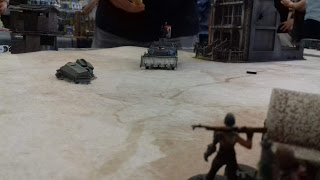 I made straight for Furiosa, who was on foot, and despite failing to machine gun her to death, Red Skull was able to drive up beside her, stun her with a fire extinguisher and then steal the scene to shoot her where she lay. 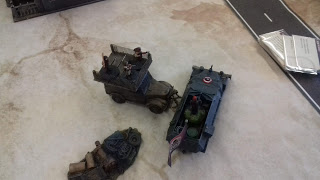 However, this left Red Skull trapped in a corner, and when Mad Max had had enough fun running over the goons, he proceeded to repeatedly ram the halftrack until it was down to only one health and had lost all but one modification.
Red Skull managed to slip away but the final turn saw Mad Max use a nitro boost to ram the halftrack again, but the armour held.
I’d taken a battering in this game, and despite killing Furiosa and two of the Vuvalini, I’d lost about six or seven HYDRA goons (yes, I didn’t have that many in the cast), but Red Skull’s Endless Subordinates rule kept them coming back and meant he gained no victory points for axing my cast.
To add insult to injury, the one objective I’d picked up turned out to be the maguffin and netted me three points and a thoroughly undeserved victory.
Final Score: HYDRA 5 - Vuvalini 2
Game 2: Skirmish
Opponent: Dave
Cast: The A-pocalypse Team

Dave’s cast was a crack commando unit,  sent to prison by a military court for a crime they didn't commit. These men promptly escaped from a maximum security stockade and today, they survive as soldiers of fortune...etc.
You can see where he’s coming from here.
I didn’t get a photo of the beginning of the game as things happened remarkably quickly.
Red Skull and the gang made straight for the A-pocalypse Team racer, which had stalled thanks to a rather vicious countdown card, opening fire and, in a display of the most appallingly unlucky dice rolling I’ve ever seen from Dave, blew up the car in short order, killing one of the team and leaving the others vulnerable to Red Skull on the roof machine gun.

Before long, Dave was reduced to a single cast member. However, he’d amassed a ridiculous amount of plot points and was able to use them to ensure he was passing his tests for breaking and also stole the scene to gather up two objectives and stay in the game.

In order to track down the errant Action Hero without risking dangerous turns with the halftrack, I dismounted the goon unit who were immediately set on fire by some sort of pyrotechnic trap. Fortunately, only one of them died.

With my forces closing in, and time running out, Dave hatched a daring plan and decided to jump aboard the halftrack and try to punch Red Skull to death.
He almost succeeded.
With only one health remaining, Red Skull smashed the Action Hero over the head with a rusty bear trap, ending the game.
Final Score: HYDRA 9 - The A-pocalypse Team 3
Game 3: Demolition Derby
Opponents, Matt, Shaun & Benny
Cast: Grand Top Gear Tour, Hawkwind, Dr Who & Friends
The final game was a four way battle, with the winner supposed to be  the last vehicle standing.
Figuring that he might make more headway against the Doctor’s smaller vehicles than the Top Gear pick up, Red Skull ordered the halftrack forward, all guns blazing, but only managed to scratch the paintwork and kill the Doctor’s driver.

However, my quarry slipped away when my driver was suddenly mysteriously replaced by the Stig from Top Gear and Red Skull lost control of the halftrack.
Meanwhile, the Top Gear tow truck ploughed into Hawkwind’s tour bus, who retaliated by using their afterburner to try to ignite Clarkson and co.
The Brigadier did a drive by and one of his soldiers dropped a grenade in the Top Gear window killing a producer and Dave the AA guy.

After a colossally terrible attempt to beat up the Stig, I eventually wrested back control of my halftrack by shooting him in the back of the head.
However, by this time, the vehicles were all trapped together. Red Skull poured fire into the Top Gear windows, they retaliated with a rocket that killed almost all the Goons. Hawkwind finally succeeded in setting fire to James May’s Jag and the Brigadier was throwing grenades willy nilly. There was much ramming.
However, by the end of the game, none of us had made a dent in the others and so the final thrilling score was...
Final Score: HYDRA 0 - Top Gear 0 - Hawkwind 0 - Dr Who 0
Although we were technically the top table, our collectively uninspiring performance meant that none of the four of us ended as the ultimate winner.
But it didn’t matter, as everybody left with some sort of prize. I picked up a box of Wild West Exodus mechanical zombies that looked like they might work for Necromunda, 7TV or even Terminator. However, I have now picked up several bits and pieces for Wild West Exodus as freebies, so I may explore this in more detail.
All in all, it was a lovely day.
May you ride eternal, shiny and chrome!
Posted by Kieron at 14:41