Feeling good about my progress this week, as I've managed to get 10 Pink Horrors done and set the tone of the whole army.
(For reference, the photos are a bit ropey because the garden is full of snow - yes, I did slip over and dump the models into the snow at one point.) 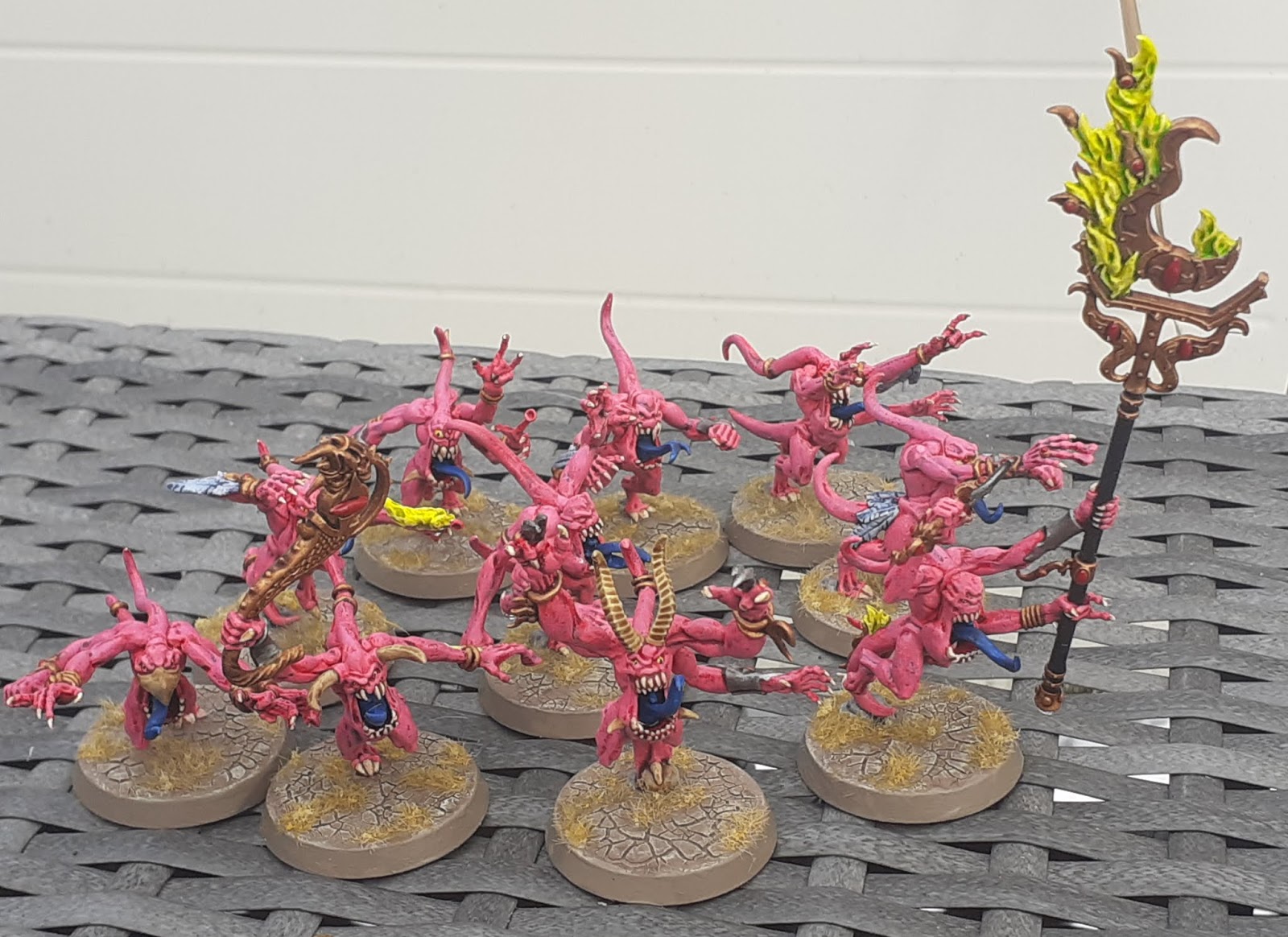 The plastic kit they came from went together really easily, with enough room for variation (swapping heads and arms) to keep things fresh when I make more, which I will be doing.
Horrors are the main troops unit in the Tzeentch Daemons army, and so I'll probably end up painting quite a few of them. The main goal with these was to settle on a paint scheme that I could replicate easily. 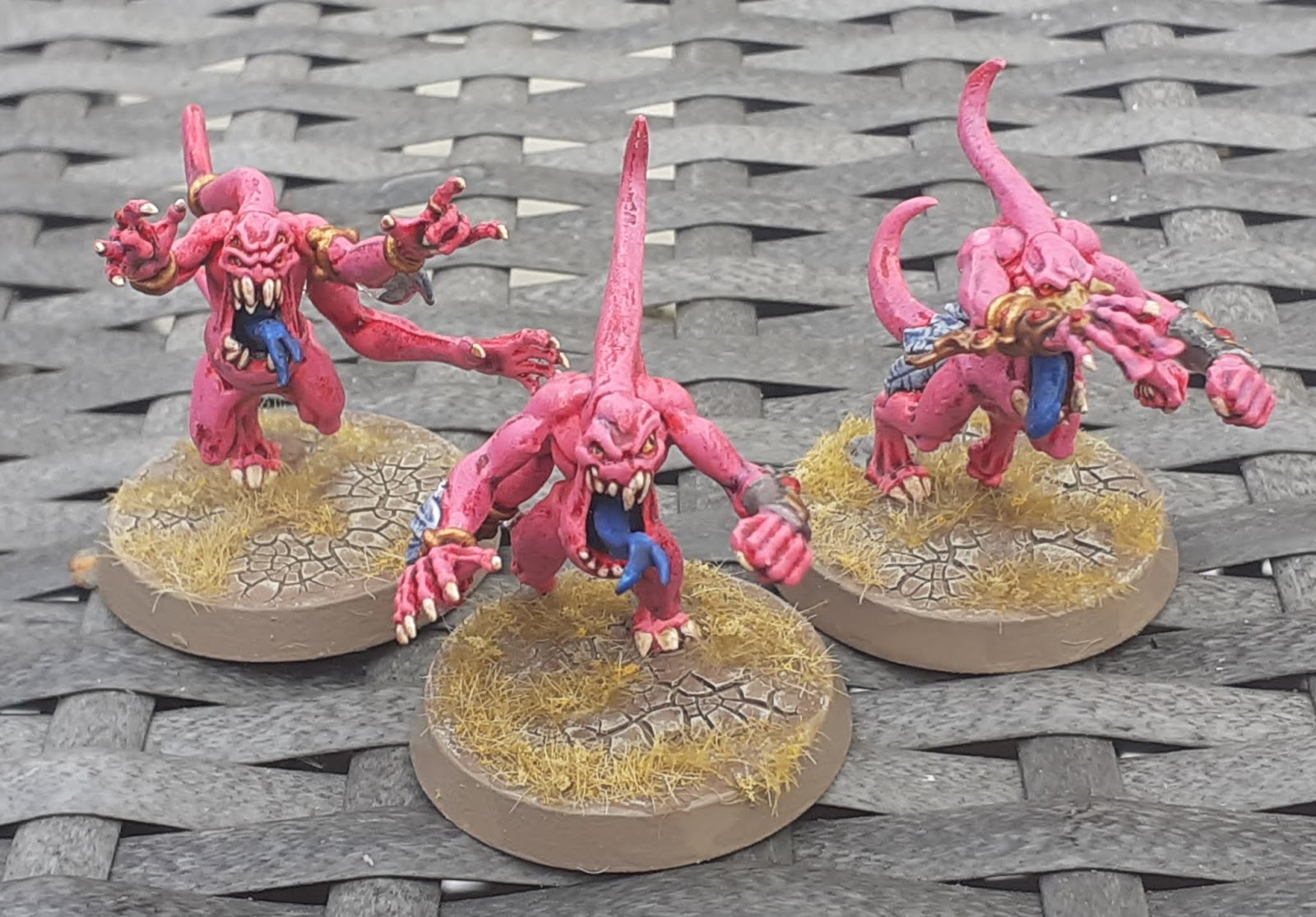 After missteps with my Dropzone Scourge, I knew that Flesh Tearer's Red contrast paint comes out as a dark pink if used over a white base, and so I used that with a heavy drybrush of Emporer's Children.
The claws and teeth also used a base of white with Skeleton Horde contrast paint, as I wanted them to be fairly bright. 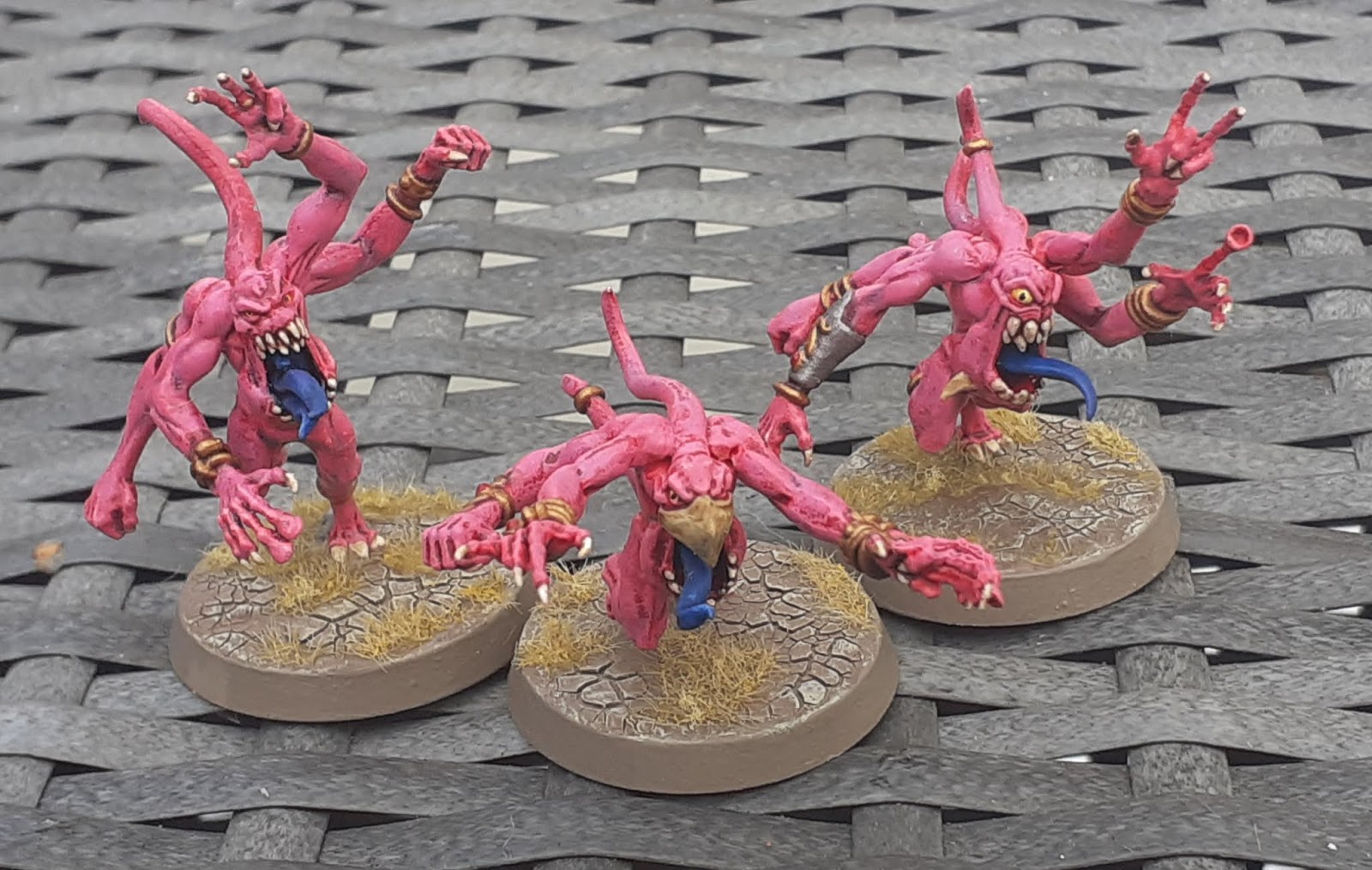 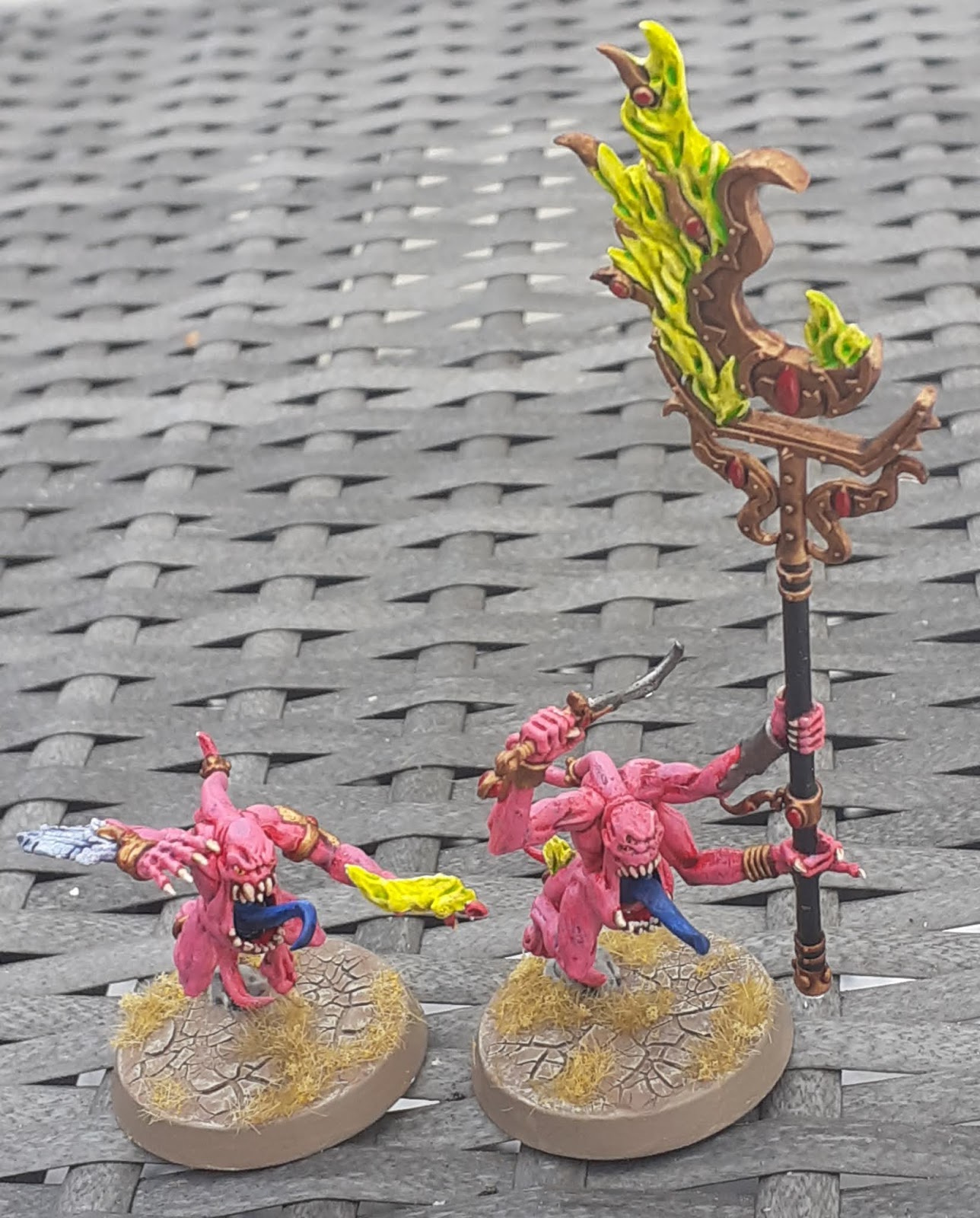 It was interesting to see how the Tesseract Glow worked on larger areas of flame, and I think it's actually better on a bigger area (it's definitely more 'glowy' in real life). The real test will be on the Flamers.
There were other details that needed picking out, like gems (Blood for the Blood God), feathers (Drakenhof Nightshade over white) and metal (Iron Breaker). 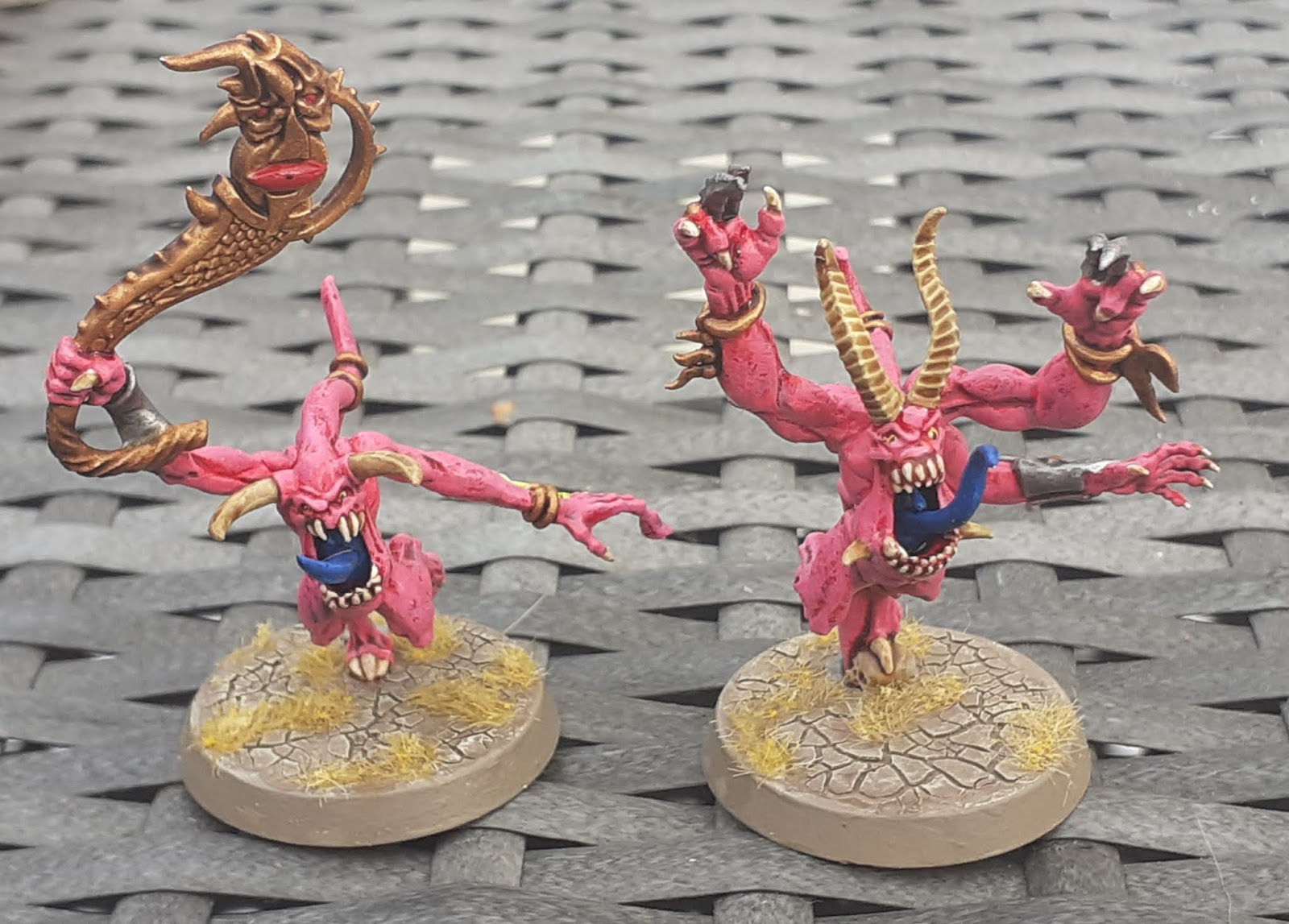 All in all, I'm really pleased with them. However the slight caveat to that is the unit champion (the 'Iridescent Horror') which lost some detailing the face thanks to the undercoat I used, and so I worked quite hard to highlight and shade to put the detail back in.
I keep on running  into issues with Army Painter sprays, especially the white one, that I don't have with other manufacturers. So much so that I will avoid Army Painter as much as I can (the most recent brushes I bought are a bit duff too).
All in all though, I'm really pleased with the Horrors. They look suitably vibrant and weren't a massive chore to do. I'll probably do future Horrors in batches of five as there were A LOT of teeth and claws to do.
I feel like I've broken the back of the set now, so I'm going to reward myself by painting a character.
Acquired: 28
Painted: 26
Posted by Kieron at 06:25