Haven't we been here before?

Thursday saw my Bretonnians once again match blades with Craig's Tomb Kings. It was a 1600 point game and the scenario was Blood and Glory. This was the same scenario we played last month, however, atleast it made a difference from Meeting Engagement.

My army was unchanged from last time out against the Empire. Craig had brought a Tomb Prince, a Level 4 Heirophant, a Level 2 Liche Priest (Lore of Light), 30 Skeleton Warriors, 10 Skeleton Archer, 6 Skeleton Light Cavalry, 3 Necropolis Knights, a Colossus and a Casket of Souls.

I deployed with my Pegasus Knights threatening to move round the left flank and the Knights Errant positioned out right with the same intention. My plan was to get one of the two units to the damned Casket of Souls to protect me from its spell and rob Craig of the bonus power dice it grants. My Knights of the Realm were positioned near to the Knights Errant to support their advance and ideally slam into his Chariots. In my centre I had my Peasants who would initially hold position and then the Men at Arms and Grail Reliquae would advance to support my Knights in combat. 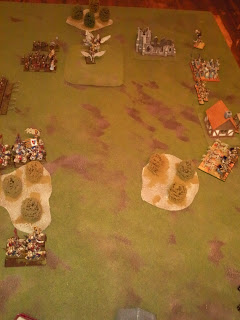 Craig deployed with a bit of a refused flank with the Casket in the centre (behind a house, coward!) and only the Chariots to its left. On the right the Skeleton Warriors, Archers and finally the Colossus stretched out to the right. Craig scouted his cavalry off my far right to threaten my Trebuchet and the Necropolis Knights were inevitably entombed. The positioning of Craig's army made me bring the Pegasus Knights into the centre as I could see a route around the flank which wouldn't get them charged by the Colossus.

The early stages of the game saw things going well for me. Despite weathering a storm of shooting and magic, the Pegasus Knight charged the Archers and Liche Priest in the first turn, killing most of the unit and, more importantly the wizard (goodbye Speed of Light). The following turn saw them charged by the Colossus, but he failed to make an impact and the Archers were finished off and the Pegasus Knights even crumbled a wound off the big guy. 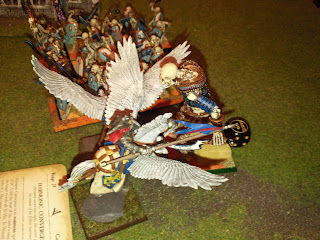 The Trebuchet hit the chariots and took one out, and reduced another to a single wound. Although Craig managed to heal some wound back on them, they were subsequently destroyed by a combined charge from the Knights Errant and the Knights of the Realm (who even risked charging through a wood). 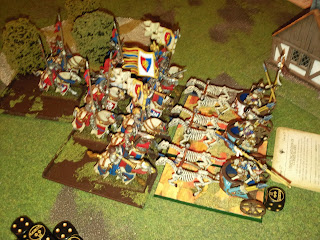 The Knights continued their flanking move as the Knights Errant overran into a position to charge the Casket, which was destroyed in short order, whilst the Knights of the Realm steamrollered the Colossus which had finally put the remaining Pegasus Knight to flight. The sheer weight of attacks was too much for the bone giant and it too was destroy. Things seemed to be going well...

Whilst the flower of Bretonnian chivalry was slaughtering their merry way across the field, things were about to get dark for the humble peasantry. Firstly, the Grail Reliquae I had positioned to slow down the block of Skeletons broke, despite being stubborn, and fled. This panicked the Men at Arms (along with my Prophetess). Then the Necropolis Knights popped up and charged the Peasant Bowmen, who bravely changed formation to gain a rank bonus which couldn't stop them from being broken as well. They were caught and the pursuing Necro Knights caused the Men at Arms to flee even further. The panicked (and so unable to fire) Trebuchet was then charged and destroyed by the Skeleton Cavalry. The final insult was that the Men at Arms failed to rally and ran off the board. 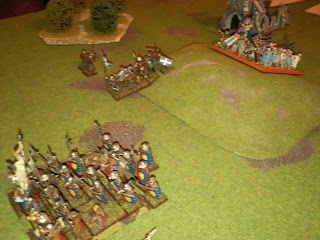 Despite the damage I had caused, I was on the brink of defeat. The destruction of any one of my three remaining banners would hand Craig the game. Meanwhile, I had to destroy his Tomb Prince (who was safely ensconced in the unit of Skeletons and no doubt had magic armour and a ward save) to win. There was only one thing to do...CHARRRRRGGGGEEEEE!!!

The Knights of the Realm charged the Skeletons' front and the rallied Battle Pilgrims charged the rear. The following turn, the remaining Necropolis Knight came into my flank. Finally the last Pegasus Knight and the Knights Errant piled in to join the fun. Despite the volume of attacks I'd thrown in, the Bretonnians had clearly used up their real lances and had fallen back on the rubber ones. The wounds that did get through to the Heirophant were saved by his magic bangles. 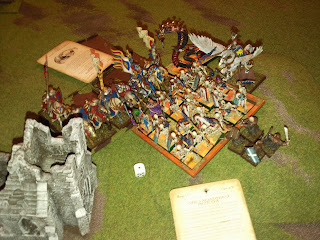 The battle was to be decided by a duel fought between the Tomb Prince and my Battle Standard Bearer. Despite initially making headway, the noble Paladin was brutally cut down by the foul Mummy and the game was over.

Being more aggressive with the Knights was good and the ploughed through what they hit when I got to choose the target. However, they really struggle with ranked infantry - I needed the Men at Arms in that fight at the end to add combat resolution and removed ranks.

I was foolish to advance towards the skeletons with my Peasants. I should have used the Grail Reliquae and Men at Arms to protect the Archers and Trebuchet and tried to pound that unit into the dust. I knew the Necropolis Knights and Skeleton Cavalry were coming but really took no measure to defend against them.

Once again, defeat was mainly down to panicking Peasants. In time, I intend to build a unit of Questing Knights who will stay with the BSB in my own half, whilst a Lord (yet to be built) rides off with the Knights. This should help with the problem.

Finally, I once again forgot about the objective of Blood and Glory. I should have concentrated on destroying the Skeletons (and the Tomb Prince) but once again I spent my time mopping up support units. I think I'm still suffering from being a Wood Elf player, skirting round the edges rather than getting stuck in.

Next up is the Empire again in two weeks. Next week I'm getting all historical in a multi-player Zulu game. "Front rank...FIRE!"
Posted by Kieron at 07:49