It's been a while since I last posted. There's been no particular reason for the lack of updates other than I've not got around to it. Only a couple of games have taken place in the interim; yet another game of Saga and for a complete change a game of 40k...you didn't know I played that did you?

Two weeks ago I introduced my Dad to Saga. I fielded my usual Vikings and he fielded a Welsh warband masquerading as a Hiberno-Norse/Irish warband (not sure if this was the best match but it made for a fun game). It was a Clash of Warlords and the long and the short of it was that our Warlords did not clash! 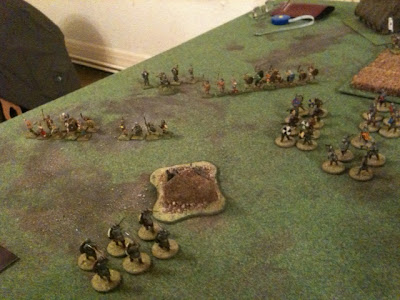 The game was characterised with me pelting across the table intent on ripping the Welsh/Irish to shreds and my Dad learning all about how he could use Holy Ground and Hit and Run to prevent me from achieving this. To add injury to insult, he would then pepper my units with javelins before reteating. Then to add more insult to injury and insult when I finally made contact my elite hard-hitting-hirdmen bounced...in three separate combats!

It wasn't pretty. The Welsh are really nasty when the dice fall kindly. My Dad likes the game though.

Then last week I dusted off my Blood Angels for their first game in at least six months to play 40k against Kelly's Necrons. He'd even bought the new book for the occasion and so my battle plan of shooting the dross to push for a phase out was screwed from the off. 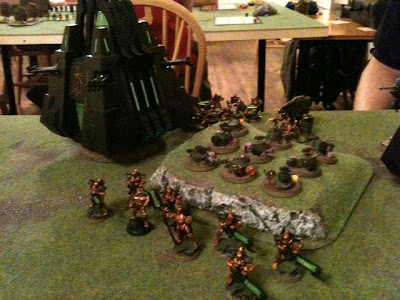 We were playing annihilation and so it was kill-kill-kill all the way. My Death Company leapt in to hack at the Necron Lord's unit of Immortals and went down swinging taking several 'Crons with them. I then splatted a unit of Scarabs with my Terminators and poured withering firepower into the remains of the Immortals, shooting them to pieces. I even managed to sneak up on a Monolith with my multi-melta wielding Attack Bikes. Things were looking good. 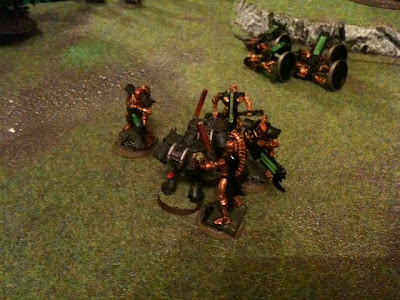 The Immortals got back up, and continued to do so for the rest of the game. The Attack Bikes fluffed their damage rolls and the Monolith was able to summon help. I had forgotten quite how nasty monstrous creatures can be to Terminators and allowed myself to be charged, and I also Deep Struck my Assault Squad deep behind enemy lines where they could be shot and hacked to pieces.

I started taking big casualties and irritated by the Immortals I foolishly threw a Tactical Squad into harm's way to get to them. The Immortals got back up again and with the aid of some Necron Warriors blew the Tactical Squad away. 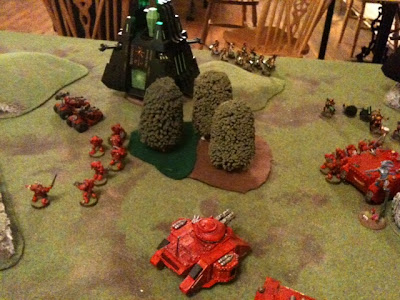 The Attack Bikes finally found their range and blew up one of the Monoliths, but the C'Tan was busy slicing through my army, accounting for 5 Terminators and a Baal Predator. My Librarian succeeded only in hurting himself with his Blood Lance and when Kelly began removing his damaged units to the rear to deny me kill points, I knew the game was up. 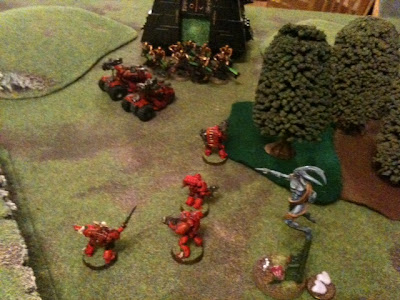 I'd been well beaten.

On the up side, I always find 40k fun when I'm playing it against someone who, like me doesn't take it seriously. They times I've play against tournament-honed lists have been some of the most unfun experiences of my gaming career. 40k is a game which really rewards lack of knowledge as you try to do the best with what you've got - possibly why it sells so well to the kids. It seems to be a game in which knowledge and experience hold a direct correlation with how predictable a game is - this is probably why I play it so infreqently.

I don't know what I'm playing this week. I'm feeling a bit demotivated but will probably get a game in on Thursday...WAB? Maybe.
Posted by Kieron at 13:14