Following recent encounters, both the B.U.F. and the Handsworth Volunteers had found themselves with high-ranking prisoners from the other side. The Handsworth men still held the B.U.F. Recruitment Officer, Heather Brown, and had been pumping her for information. Meanwhile, Captain Lilley of the Handsworth Volunteers had been thoroughly probed by the Fascist interrogators.
Both sides now saw an opportunity to secure the return of their comrades and a prisoner exchange was tentatively negotiated, the location being a crossroads near Dronfield. 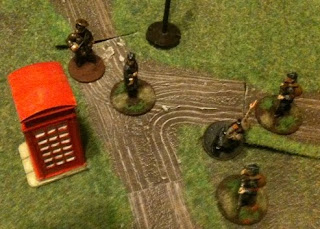 Obviously, both sides feared that their enemy would seek to turn the exchange into trap and so armed men lurked in the hills around the exchange point, nervously alert for any sign of treachery. 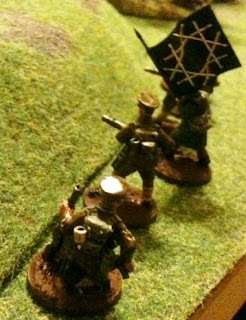 However, naturally both sides also saw this as a perfect opportunity to lure their opponents into a trap and so with reserves on the way, weapons were loaded and aimed at the exchange taking place. 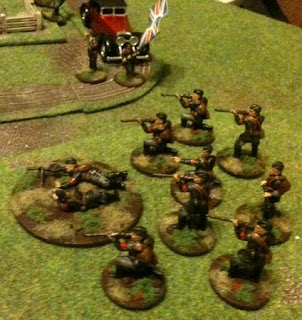 However, unbeknownst to the warring factions, their chosen meeting place for the prisoner exchange, selected for being quiet and out-of-the-way, had also been chosen as a the location of a secret meeting of the Masons, who were hatching nefarious plots to break the peace treaty in Sheffield. The Worshipful Master (the Chief Constable of the Sheffield Constabulary) had assured the safety of the meeting and when armed men were seen gathering from the windows, he made a call to summon a section of uniformed officers to arrest anybody who sought to disturb the peace. 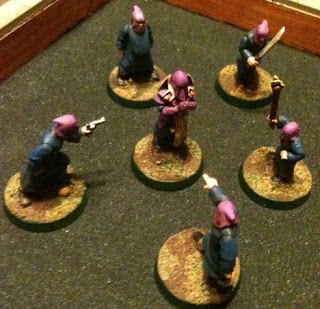 To further complicate matters, the Royal Navy Auxiliaries who had recently tangled with the Handsworth Volunteers were also on a 'foraging' mission in the areas. They were in need of spares to repair the armoured cars which had been damaged in the ambush. They were heading down the road straight towards the prisoner exchange... 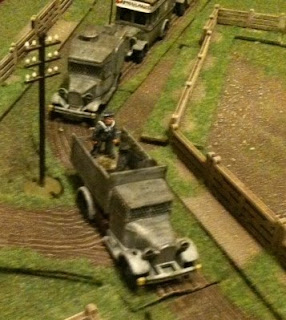 The Sheffield Police arrived and immediately set up a perimeter around the building where the masonic Lodge were meeting. They were ready to spring into action should the meeting be threatened or, heaven forbid, someone began shooting. 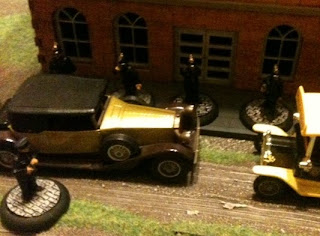 With Heather Brown secured and being escorted away from the exchange, at speed, in a B.U.F. van, the Blackshirts began shooting. They managed to wound Captain Lilley and the sound of gunfire was also a signal for the trap to be sprung. 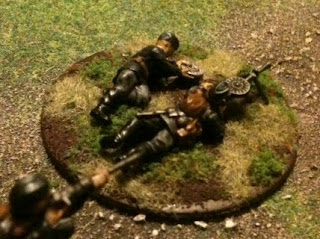 The Wortley Brigade, the Blackshirts' new allies from north of Sheffield, emerged behind the Handsworth position, capturing the Volunteers in a vice from which they surely could not escape. 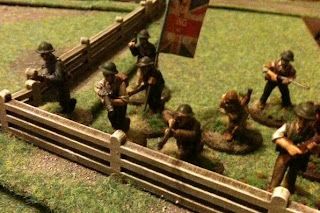 However, the Handsworth Volunteers were about to receive unexpected aid in the form of the Sheffield Constabulary who, hearing gunfire, rushed to arrest those responsible. 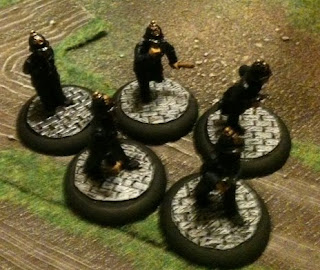 Meanwhile, the Handsworth men sprung their own trap (you didn't think they were that naive did you?), and their own new allies, the Swallownest Socialist Brigade unleashed the High Altitude Marksman's Mount for Extended Range and bus load (literally) of Socialist Soldier on the rear of the Wortley Brigade, routing them in short order. 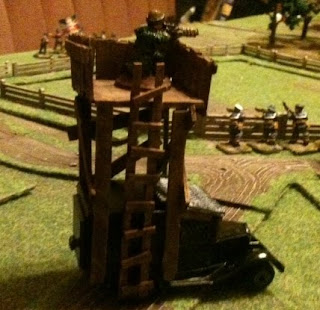 Meanwhile, the Navy's progress was halted when they saw a strange figure striding through the field towards their position. Nervous at the prospect of another ambush, the entire column dismounted and began firing at the armoured figure. The hail of bullets seemed to bounce off the figure, but the intensity of their fire seemed to drive it back and away from the area. 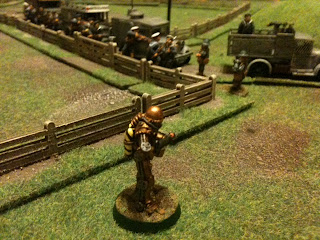 Having ascertained that it was the B.U.F. who had broken the conditions of the Sheffield peace treaty (and conveniently ignoring the fact that they weren't in Sheffield), the police took up positions on a building and began to fire down on the heavily armed Blackshirts, forcing them into cover. 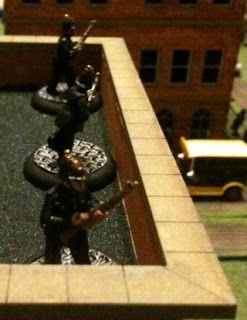 The Handsworth Volunteers were also pouring fire at the B.U.F. and the van carrying Heather Brown was hit and exploded. Fortunatle, the fascist femme fatale was helped from the wreckage by the durable Private Milligan and he guided her to safety. 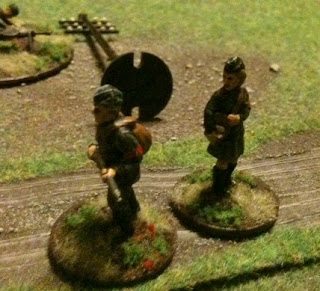 Having heard all the commotion, the Masons came out from their meeting and the Worshipful Master held and impromptu meeting with the Sergeant in charge. However, they came under fire from the enraged B.U.F. and sought cover amongst the vehicles parked outside the building. 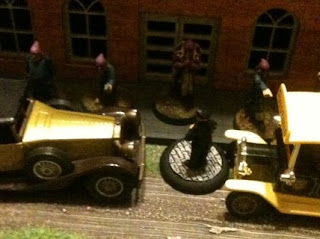 Things seemed to get worse for the B.U.F. when more S.S.B. reinforcement arrived in the form of a fire engine towing and field gun! However, the tide was about to turn as two squads of Handsworth Volunteers were swept from their positions by the Blackshirt Assault Squad and the Wortley Brigade's improvised tank, 'The Dragon', came chugging along the road behind the S.S.B. and poured heavy machine gun fire into the crew of the artillery piece. 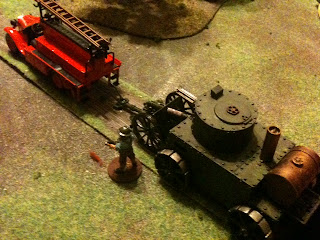 Unfortunately, this change in fortunes was only temporary as the main part of the B.U.F. force was caught in a sudden pincer movement and destroyed by the Masons and the Police. 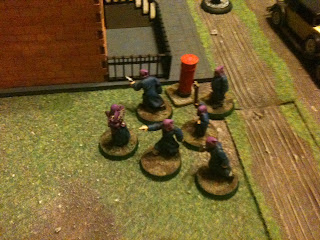 Meanwhile, the S.S.B. were not faring much better as having mistakenly fired upon the Navy Auxiliaries, assuming them to be allies of the Blackshirts. The sheer volume of concentrated fire power from the Navy destroy both of the socialist vehicles and drove they men from Swallownest from the field. 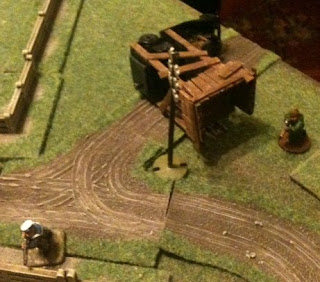 However, an explosive round launched from the retreating metal figure had damaged one of the Navy vehicles in the middle of the column, preventing them from either advancing or retreating. The Scouse sailors, took up defensive positions whilst the van was hitched up for towing. 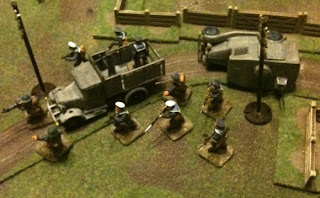 With the B.U.F. retreating, the Wortley Brigade long gone, the S.S.B badly mauled, the Handsworth Volunteers began to pull back too. They had no desire to engage either the Navy or the Police (especially since they were both in strong defensive positions), however, they were concerned about the Wortley tank to their rear. Suddenly, the turret of the tank turned away from them, and appeared to be following the progress of a young lady in a tight sweater cycling away from the battlefield.
The Handsworth men took their opportunity and rushed the improvised tank. The crew bolted and left the tank to the Volunteers, who (with no knowledge of engineering) stripped what they could from the vehicle for their own use. 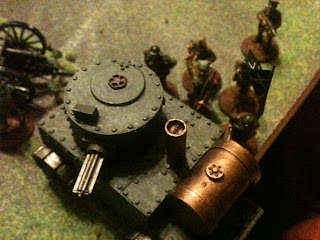 The battle was over. It was not clear who had won. The B.U.F. had secured Miss Brown's release and given the Handsworth Volunteers a mauling, but at a high cost to themselves. The Handsworth Volunteers had been badly hurt again but had given as good as they got and managed to loot some very useful equipment from the abandoned tank. The S.S.B. and Wortley Brigade had both had a terrible first experience of combat and the Navy had once again failed to make progress towards home. Although the Sheffield Constabulary had achieved their objectives, they had worryingly gained a powerful enemy in the form of the B.U.F.
Posted by Kieron at 04:21