With the end of the month just over an hour away, I thought I'd post a little bit of painting progress.

I have another game of Flames of War against Pete's Russians arranged for tomorrow, and to make things a little different we've gone for a Mid War clash. This leaves me with a choice: unreliable Panthers (and fewer of them) or infantry. Understandably I've gone fore a big change and opted for infantry, however this leaves me short of points.  Therefore, I've brought my platoon of Marder II tank hunters to the front of the painting queue. 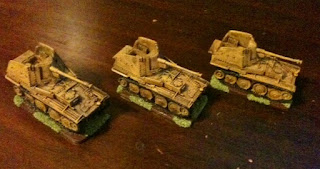 A simple paint job with a wash and highlight for now. There's some detailing in the cab to finish, I still have to add crew and I may be tempted to have a go at some camouflage at some point. However, they are good enough to hit the table tomorrow.

The models are resin and from Forged in Battle and are the first I've had from that company. I really like the casting, they are really easy to assemble and if the rest of their range is as good as these, I suspect that they are more likely to gain my custom than the extortionately expensive Battlefront.

Next up is a looted Soviet KV-1 heavy tank. I'm not sure that a single slow tank is the most competitive option available, but I like the concept of having a looted tank in the army. This model is from Zvezda. Simple, cheap and ridiculously easy to assemble. A little piece of advice, widen the turret hole in the hull a touch and once they were painted, the peg got stuck in the hole and I ended up snapping it off. 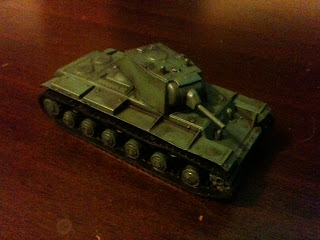 It does need some more work, the tracks need more detailed highlighting and I need to do something about the hull colour. I'm also tempted to add a Nazi flag to the back to inform the Luftwaffe not to bomb it.  However, once again, good enough for the table tomorrow.

Expect a battle report in the nearish future. I've also got some FIW settlers which need only a little work to finish off, so theu should be done in the next couple of days.
Posted by Kieron at 14:54