The only way I got to keep them Tigers busy is LET THEM SHOOT HOLES IN ME!!!

I changed my mind. Here's the Americans I've done so far: 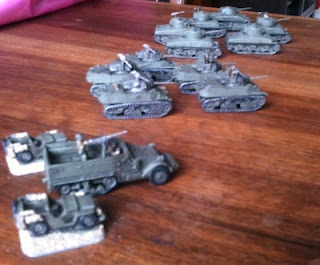 So far they number 6 M4A1 Sherman Tanks, 5 M5A1 Stuart Light Tanks and 1 Reconnaissance Platoon of an M3 Half Track and 2 Jeeps. Strangely enough, I can make a game legal company out of them, 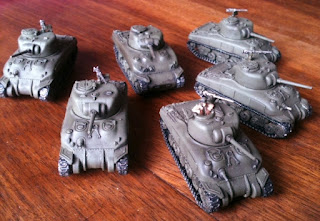 The Shermans are mainly from Plastic Soldier Company, and I really like them. There is the slight caveat that I found the tracks a bit fiddly to do and I wish I'd painted the tracks before attaching them. However, they are crisp, detailed and inexpensive. I mentioned in my last post that I've waiting to get some decals for them, once the decals are on I'll also add a bit of stowage. Although the PSC sprue doesn't contain much in the way of stowage (tracks and a fuel tank), I did a trade for some US Rangers and assorted bits which include stowage, which will be used to add a little individuality to the models. 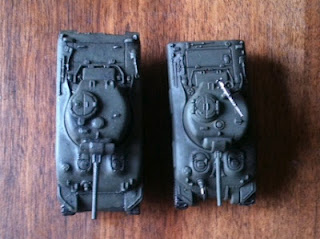 One of the Shermans is a Battlefront resin Sherman from their Open Fire! starter set (the old one that was replaced by Achtung!). As you can see, it's a bit bigger than the PSC models and the details are not as sharp. I was intending to use this as my 2IC, because it kind of sticks out like a sore thumb when placed next to the others. However, I've managed to get my grubby hands on three more starter set tanks from Pete and so I'll be making them into a separate platoon which not only prevents it from looking odd on its own, but also provides an easy way to distinguish between platoons on the table. 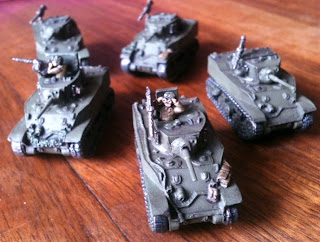 These are my Stuarts. Now, as you know, it's unusual for me to spend as much as I did on these, however, there aren't really any cheaper options for Stuarts and I really wanted some in the force. Their fast and the pack a hell of a lot of firepower for such a small tank and as such seem like they'll be loads of fun to play with. The models are from Battlefront and they are really nice, with lots of individualising stowage moulded on to the hulls. My one gripe with this set is that the hull of one of the tanks is slightly cock-eyed and so the tracks are a touch skew-whiff. I filled and filled as much as I could but it's still not right. You'd have to look really closely to spot the fact that the tank's on an angle, but I know, and it bugs me. 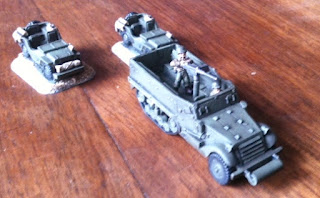 Finally the Recon Platoon. As you can see, the bases of the the Jeeps need finishing off and I need drivers and .50 cal machine guns. Once again the Ranger trade almost comes to the rescue as it contained Jeep passengers and .50 cals and mounts but no Jeep drivers. I'm either going to have to convert an infantry model or pick up some Peter Pig drivers from Derby (although that might introduce scale issues with the heads).

The M3 Half Track was fun to do. I've built it as an unadulterated mid war model with the central MG mount as opposed to the turret ring with was introduced later. This is because the Recon available in late war replaces the Half Track with an M8 Greyhoubd (I think). However, because of the central MG mount I can't now fit in the three seated passengers, so I may have to see whether I can cut one of them off as I like the effect of crew in vehicles.

So, there they are (apart from my plane, but that's a pre-painted kit, so there's nothing to show off). On the bench at the moment are three more resin Shermans to make up the second platoon, another PSC Sherman to become the 2IC and some infantry for the Recon Platoon. They certainly all should be finished by the end of October, ready for the campaign beginning in November.
Posted by Kieron at 03:49