Firestorm: Lorraine - Across the Moselle

The second game of our Firestorm: Lorraine took place a couple of weeks ago, and I'm only just getting caught up. Again Matt's Americans attacked Pete's Germans across the Moselle just north of Metz, seeking to cut off the Panzers in Luxembourg and again he was supported from the air. Again Pete's Firestorm troops were infantry of variable quality, but instead of my Panthers, Pete's heavy tanks came in the form of two Tigers.

However, this time Matt made three important changes. Firstly, the Firestorm troops he chose to support his assault were his newly painted Towed Tank Destroyers. Secondly, his army featured Sherman 76mm tanks, which are more capable of going toe to toe with the German tanks. Finally, realising that they weren't cheesy enough last time, Matt actually looked up the correct anti-tank score for his M10 Tank Destroyers.

Needless to say, these change spelt doom for Oberst Pete von Treadhead and the Americans managed to cut off the Panzers to the north. Luxembourg appears to be General Matton's next targets if he can keep the initiative and given the rules on only Panzers attacking for the Germans, the Panzers are going to have to cut their own way out of there should the Germans manage to seize the strategic advantage. 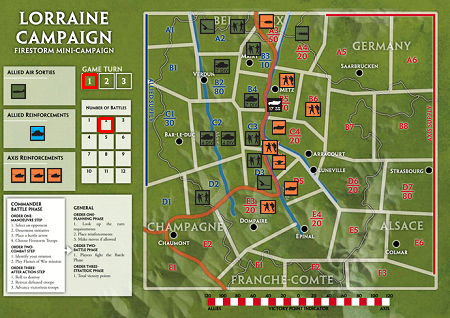