As I've finally got enough terrain to fill a table, I decided to have another go at grappling with the rules of the Batman Miniatures Game from Knight Models. 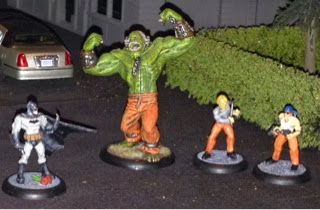 I decided to keep it simple and have a Rep of 130 for the game pitting Batman against Killer Croc and two Blackgate escapees.

The scenario was a Skirmish, which is pretty much a pitched battle in other rule sets. I didn't bother with enigmas or objectives, but I did use lamp posts and sewers. Admittedly I forgot all about the effects of light, but in the end, the fact that Batman can see in the dark and the bad guys had no weapons which could shoot beyond their vision range meant that the light sources were irrelevant.

This was a solo game to learn the rules so don't expect anything too tactical. 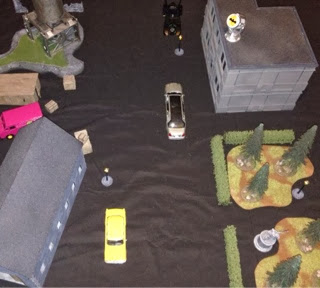 Here's the board. Batman began Behind the building on the right near to the Batmobile. The convicts were in the warehouse, probably looting it, whilst Croc began in the sewers. I hadn't put the sewer grates on at this point so if you see any two pence pieces later, that's what they are.

Alerted to a break in at a warehouse, the Dark Knight uses his Batclaw to take to the rooftops to survey the scene. 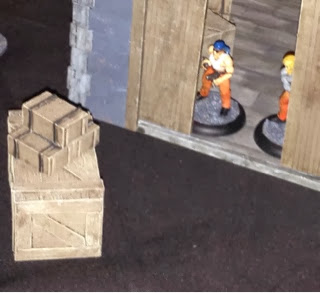 Unaware that they are being watched, the two crooks make for the exit with their stolen goods. 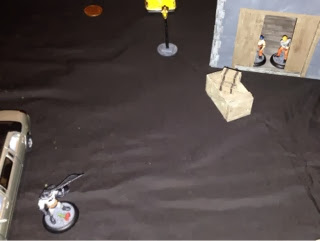 Suddenly a caped figure swings down into the street and hurls something at the villain with the gun, striking him on the head. 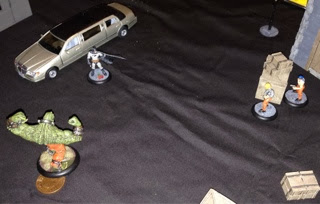 With a bellowing roar, a huge shape erupts from the sewers. It seems that the Caped Crusader has swung right into a trap. 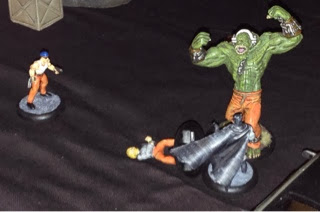 Shots are fired as the villains charge. Batman is hurt but manages to knock down on of his assailants with a swift sweep of his legs. 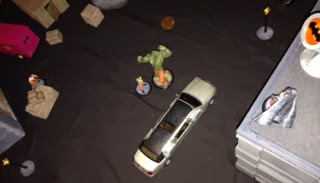 Realising he is outnumbered, Batman swing back up to the rooftops, hurling a Batarang as he flees, further injuring one of the gang. 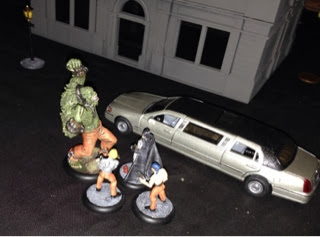 Having assessed the situation, Batman attacks again: fists, claws and weapons fly in a flurry of attacks, blocks and counter attacks. 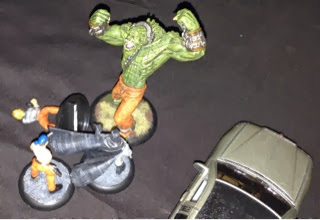 Batman hands out a beating to Croc's gang, knocking one of them out. Seeing that they are overmatched, Croc and his companion flee for the safety of the sewers.

Batman won, mainly because his high defense value and counter attack ability make him damn near impossible to hurt. I  also threw him into combat to test the rules, but it's clear that his ability to see and shoot round corners in the dark means that he could just snipe his way to a small win.

I liked Croc as a character, he's pretty straight forward, but starting in the sewers and able to pop up anywhere is a nice touch. The mooks were mooks, meh.

The game works and I like a lot of it, but there are a lot of fiddly rules which need to be repeatedly referenced I'm not sure are necessary. I'm not entirely sure that beyond the alternating activations, this game delivers anything that can't be easily replicated by something like  Necromunda.

I'll continue to give the game a go as it has some charm and the work on building the characters has been done for me. I've also got a few people interested in a game. I can easily do gangs of 300 points, so that's the next game I'm likely to play, and I'll try to bring in other rules like enigmas.
Posted by Kieron at 14:40