Way back when I began my Batman project, when it wasn't focused on BMG and I was planning to write my own rules, a Heroclix Joker was one of the first models that I painted. Despite the general difference in quality between Heroclix and Knight Models, I've been very happy with my Joker. In fact, not being able to use him at the tournament I attended last year meant that I had to experiment and put together a surprisingly effective Harley Quinn crew.

I had no plans to replace my Joker with an official model. I'd toyed with the idea of getting a Heath Ledger Joker for official use, but it certainly wasn't a priority.

However, I then came across an opportunity to get a second hand Joker starter set at a knock down price and...well..Cheaphammer happened! 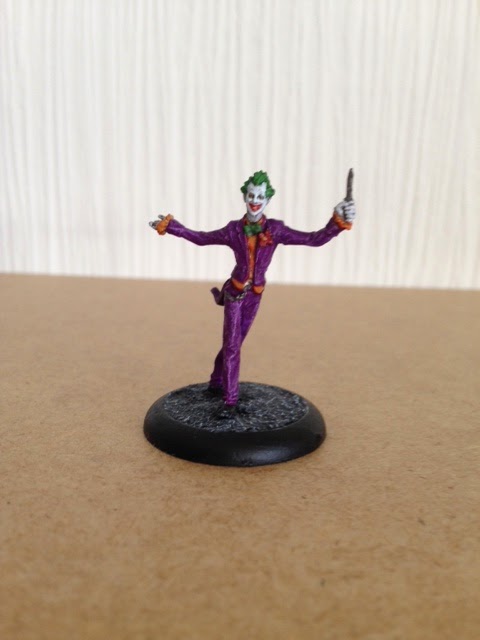 So now I have an official Joker model which opens up more options for tournament play. I'v done a fairly conventional paint job on him, but I'm particularly pleased with actually managing to get teeth showing in his mouth.

However, what I'm absolutely delighted with are the tails of his coat. These were missing on the model I received (hence the reduced price) and I had the rather excellent idea to make my own using some old GW Wood Elf bits (cut from one of the banners, if you're interested). A bit of cutting, sticking and filling later and I had solved my problem. Once the paint was on, the join is practically invisible and I have to say, I think I prefer my tails to the real ones.

Along with the Joker, I got three more henchmen. I showed what I'd done with the Knife Clown on my last post, but Ringmaster and Contra-Auguste presented a slight problem in that I already have both of these models and they're not the kind of henchmen that you can use more than once in a crew.

So I decided to get creative... 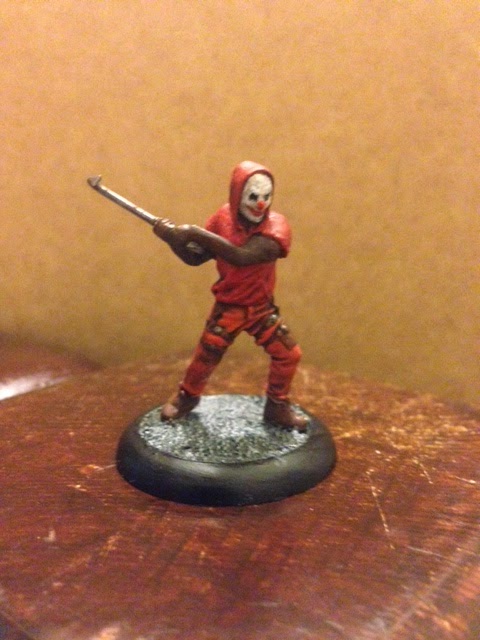 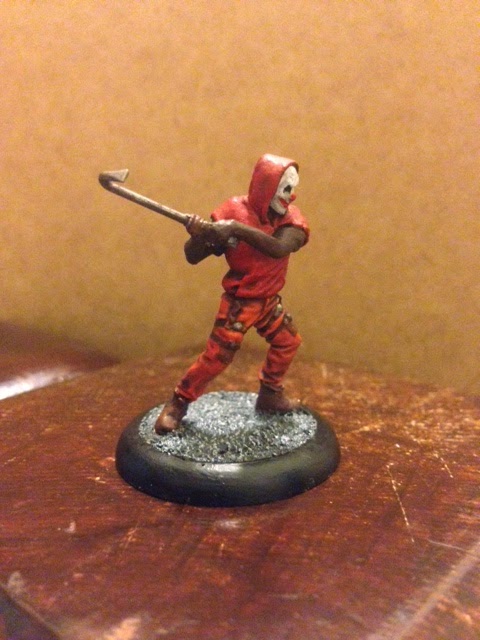 This is Contra-Auguste done with a weapon swap to give him a crowbar, and a paint job that allows me to call him 'Red Hoodie'. These two details amuse me endlessly, but you need to be a bit of a comic book nerd to get the 'joke'.

I'll be using this model as a generic Tube Clown. As this is a model I don't actually own yet and a character that can be duplicated within a gang, this doesn't limit my future purchases at all. However, given that the Tube Clown comes with a model I'm not that keen on (Master of Ceremonies), this also potentially save me some money.

I'm now turning my attention to what to do with the Ringmaster model. He's a bit trickier to convert, and even tricker to make him look distinctive from the one I already have, but I've got some ideas. More to follow...
Posted by Kieron at 08:55