In my on-going quest to recruit more players to the Batman Miniatures Game (mainly so that I can play them), I managed to have a 200rep game with Mike. I picked the crews for both of us with the intention of giving a good picture of the game (and to get some of my most recently painted models used), and we discussed a lot of rules and decisions quite openly as we played, so it wasn't full blooded competition...yet.

The scenario was Skirmish (a straight fight with bonus points for taking down leaders and numbers), and the terrain was largely scatter terrain as we were playing at  Pete's (also, I feel too many buildings plays into Batman's hands). The crews were as follows:

Mike took the lead and Deadshot took to the sewers. Ringmaster bat-clawed onto a loot objective and Harley and her boys moved en masse towards the starting position of the Batman. The Female Cop also climbed into the sewer, whilst the other cops edged forwards (the Male Cop failed to solve a riddle). Batman took the opportunity to leap onto a container and teach Mike all about remote-controlled batarangs and the shooting rules (we had discussed this beforehand - I wasn't being a total dick). Tube Clown was knocked out in one go and wouldn't see action for the rest of the game. 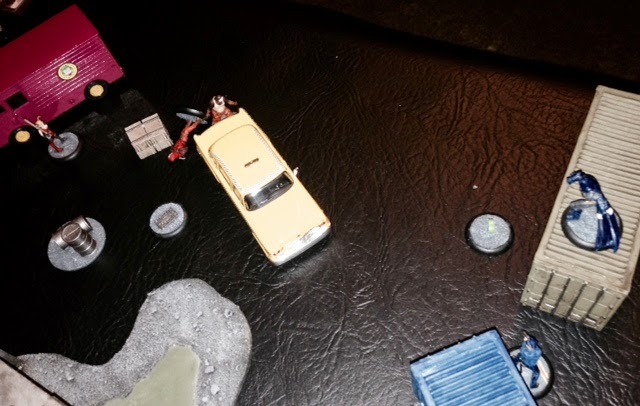 I took the lead and Batman swung down towards Knife Clown in order to dish out some old fashioned justice. At this point I realised that despite his points cost, Origins Batman doesn't have Combo and his Shock Gauntlets only work on a Critical - he's not actually as good in combat as some of the cheaper Batman options. Despite this, he was able to lay enough smack-down to knock out Knife Clown, who similarly wouldn't be seeing action again.

Mike worked out that Harley might as well have a go at Batman as she'd struggle to run from him, used Disarray to remove his defence dice and came barrelling in, trying to his a home run with his head. Unfortunately she failed to connect (even without defence dice, with Defence 5, Bat-Armour and Endurance 8, he's a tough nut to crack). 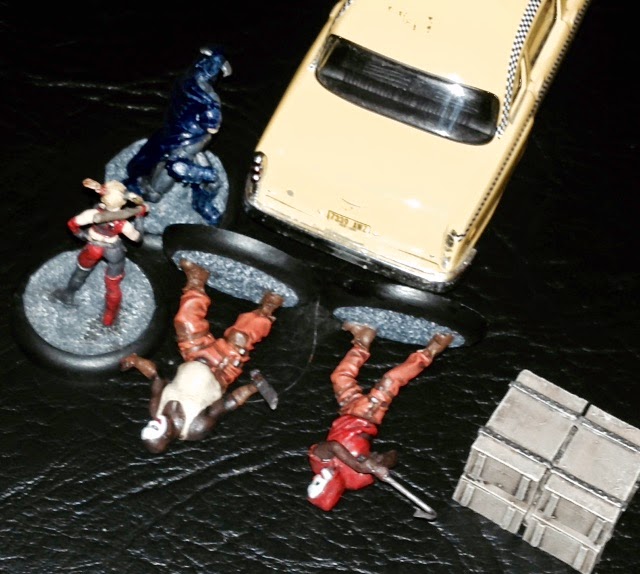 Meanwhile, Ringmaster grabbed his loot and swung again towards the ammo crate in my deployment zone. He took fire on the way through from Agent Ron, but careful use of Unpredictable saw Ringmaster able to shrug off the stun damage from the cop's sidearm. 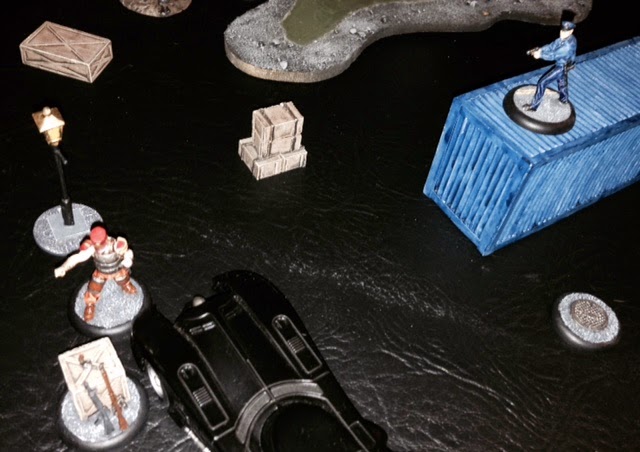 ﻿
Up popped Deadshot, and down went the Male Cop in a hail of Rapid Fire bullets. Up until this point, I thought I'd made a mistake using Batman as he was too powerful for Mike's gang to cope with. However, with Deadshot now holding the centre ground, I suddenly felt very vulnerable. 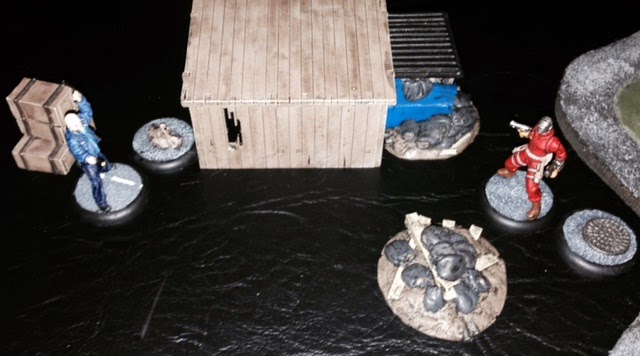 Harley swung wild again, and slipped away from Batman's grasp. In an attempt to even up the score (and demonstrate the Coup de Grace rule), I had Batman throw his attacks at Knife Clown on the floor before following up. However, he narrowly missed removing the henchman as a casualty, and Knife Clown was left on three blood and one stun.

The Female cop came out of the sewers near the downed clowns, but didn't have enough counters to Arrest either of them this turn and instead decided to beat an unconscious guy on the floor and trust that nobody was filming this. 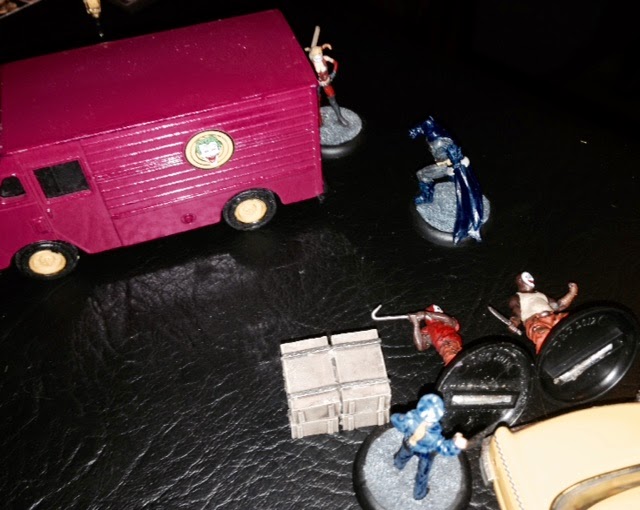 Agent Ron continued to pour fire at Ringmaster, but although he repeatedly caused damage, the clown's ability to hold dice in Special meant he was consistently removing stun damage at the end of turns, making the cop's gun only half as effective as it should be., and he had no trouble dropping his loot and controlling the ammo instead. I'd also forgotten how much Endurance Ringmaster had and it dawned on me that Mike had stumbled on a perfect use for the elite clown - durable objective grabber. 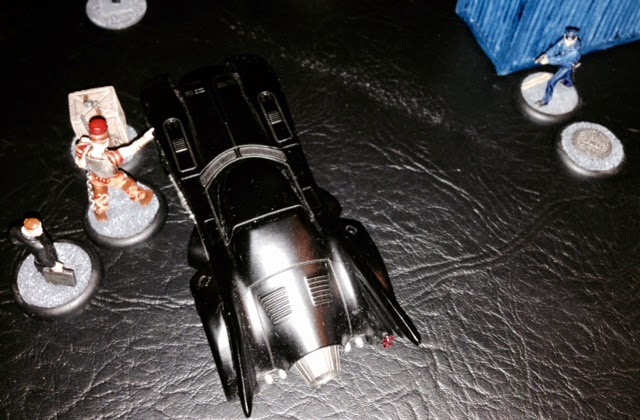 Things had got a little sticky, although I took the lead, Deadshot could draw line of sight to both of my remaining cops. Realising that the Female Cop would at least get a Ping! roll, I decided to activate Agent Ron first in an attempt to use the last of my ammo to bring down Ringmaster before heading for cover. Once again, my shooting had an underwhelming effect and realising that his nightstick would be largely ineffectual against Ringmaster in full defence mode, he headed off towards the remaining riddle.﻿ 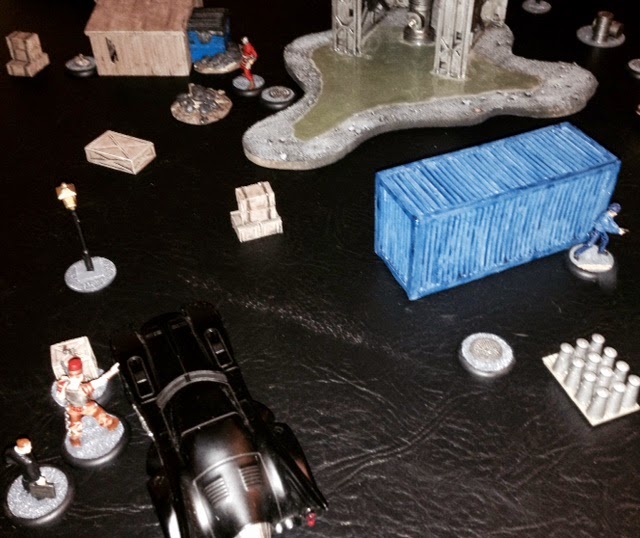 Deadshot took aim at the Female Cop, and I prepared for the worst. Fortunately, he only managed to hit her once (from three shots, with re-rolls!). Frustrated, the assassin wandered over to control some loot so he could at least add to the score this round.﻿

Wounded, but still active, the Female Cop now went into action. She arrested Tube Clown and with only a single attack, succeeded in inflicting the last remaining point of blood damage on Knife Clown, taking both of them out as casualties in one turn. Batman continued to pursue Harley Quinn, hurling batarangs around her van, and inflicting significant damage on her.﻿ 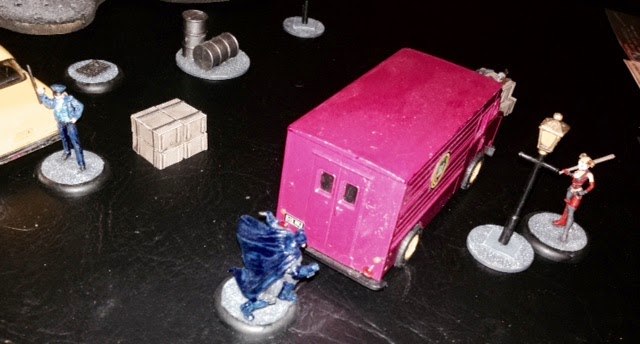 Mike took the lead and once again decided attack was the best form of defence (I'm really not so sure about this strategy when the Batman is involved), and launched Harley Quinn at the caped crusader. Her Disarray trait, once again, messed with his ability to hurt her, but this left him with more than enough defensive capability to shrug off her attack.

However, his own attacks failed to connect, as did the Female Cop's, although they now had her outnumbered with me guaranteed first activation on the following turn.
﻿ 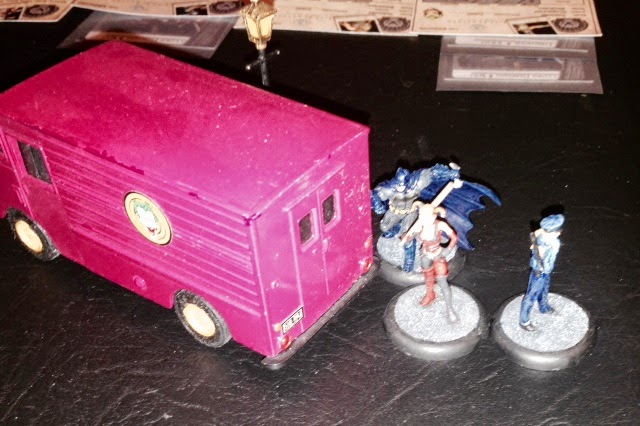 Deadshot moved away from the loot and fired wildly at Batman, but failed to hurt the vigilante. Agent Ron used the distraction to make a break for the riddle and managed to solve it in the full knowledge that he was no in Deadshot's sights. Ringmaster still guarded his ammo.

Batman laid into Harley Quinn, knocking her out, despite her best efforts to block him, and the Female Cop arrested her almost immediately. Between them they managed to amass a whopping 13 victory points from taking down the band leader (including the 3 extra points from the scenario). 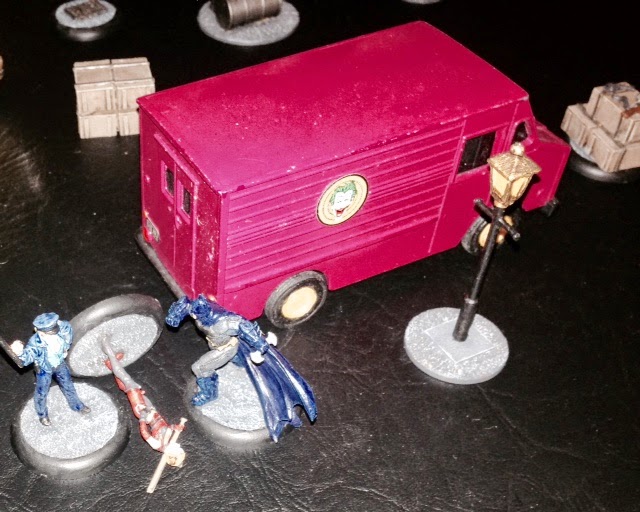 However, all of this action left Agent Ron vulnerable. Deadshot took aim, fired and hit...once. He succeeded in knocking the policeman down, but he wasn't out. With Ringmaster still on the objective, neither side dropped below 50% and the game was over. 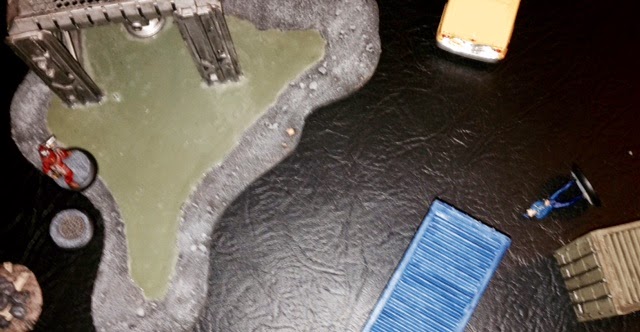 Although I had more points, this is technically a draw. To be honest, that's what it felt like, and I'm conscious that had Mike made a determined attempt to escape with Harley, he might have got away with a big win.

As ever, the MVP's turn out to be henchmen with Female Cop scoring 13 of my points and Ringmaster scoring 14 of Mike's. As always, I found Deadshot to be a horrendous threat, even though he actually didn't live up to his billing in this game. Origins Batman in a hard case, but he is very vulnerable to bad dice and after using him for the first time, I'd be wary of being over-reliant on him in combat. He seems to be at his best jumping on isolated henchmen, or taking on bigger fish with support. I'd hesitate to throw him at someone like Big Bane, who only costs 6 points more.

This was good game, and it seems to have had the desired effect of encouraging Mike to get into the game. What's more, Pete has now bought the rulebook (and managed to snag an Alfred) and another of the Watchmen. He's talking about also getting Dark Knight Batman and the Batpod...

Hopefully this all means more games are on the way.
Posted by Kieron at 14:36