I've been adding to both my urban terrain, and my BMG collection recently, and I thought I'd show some of it off.

First up, is my new gaming mat from Deepcut Studios. I've previously been a bit annoyed with my lack of roads in my game set ups, and this fits the bill perfectly. It's made of mouse-pad material so its safer for my models to be laid down on and is bizarrely quiet when you roll dice on it (not sure I'm used to that yet). It stores away much smaller and more portable than my old boards (which have been donated, somewhat ironically, to Matt) and really adds to the loom of my games...when I get them.

The only real downside is that the lay out is fixed and I really need to ensure that there is some more suitable street furniture and vehicles around the roads, as the distinct lack of cover could be a bit lethal.

Yes, yes it is. This is the Knight Models Batmobile that I treated myself to at Salute. I'd dithered about putting it together and painting it, but when I finally got to it, the model was remarkably easy to build and paint. There were some chunky bits of flash to remove, and there was a mould error in one of the wheel sections, but it was in one of the connecting points, so it just took a little carving to sort and didn't affect the final model. Otherwise, the model is cleanly cast and what appeared to be major issues as I was building it, ended up hidden by the rest of the model later. The fiddliest bit of the whole model was attaching the fins to the cockpit after the model was painted. 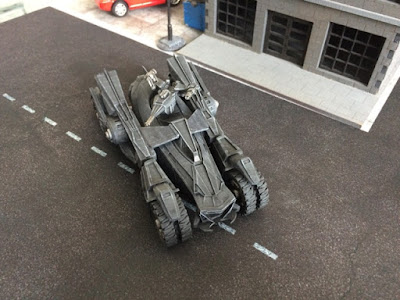 In game terms, I don't think this model will see a lot of action, other than as a piece of terrain. Firstly, it's a 'Legend', which although perfectly allowable in regular games, steps up the power level to a point where some crews can't cope. Although Joker and Scarecrow have rocket launchers and gatling guns available, Poison Ivy doesn't have access the any ranged weapons (without hiring Classic Deadshot), that can deal reliable damage to this fast moving target.

Secondly, at 150 reputation, £1500 funding and also requiring Batman to be present, it eats up a good chunk of your crew in regular games. It really belongs at higher points categories with other Legends, of which there are currently none. It's also the only vehicle in the game at the moment, but I can't imagine that staying the same for long. After my experience with this, I'd definitely be interested in more KM vehicles, and I really want them to publish official rules for the MDF SWAT van (I might even forgive them for mow much of a pig it was to put together then). 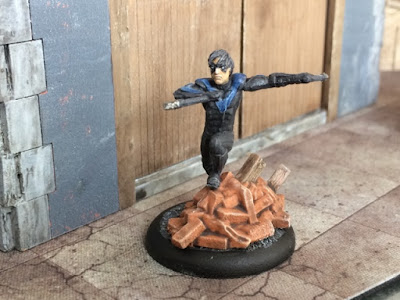 Nightwing is what Dick Grayson became after quitting as Robin. I needed a new model when I decided to turn my cheaphammered Nightwing into a cheaphammered Colossus, and I took the opportunity to pick him up at the Titan Games event in Lichfield. Really straightforward to build and paint, the biggest issue was his massive tactical rock. I couldn't just cut it off, as he would have looked like he was doing lunges, so I decided to replace it with tactical bricks from the Mars Attacks game that I picked up cheaply recently. I'm happy with the results.

In game, Nightwing packs a really good punch having both combo (allowing him to attack more often) and handy (allowing him to re-roll attacks), making him more dangerous in combat than Batman, although the Dark Knight is more durable. He'll probably be a central feature of my next hero crew. 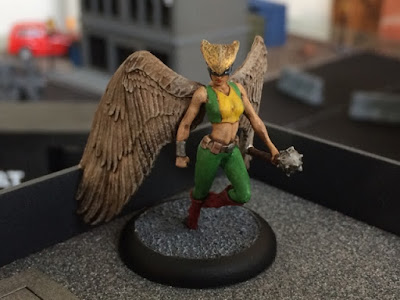 I've also painted Hawkgirl (sorry about the poor photo), who is a bit of departure for me. She is only second non-Gotham character I've painted, and unlike the Flash, she does not appear in any of the Batman books, cartoons or films that I own. She is, however, my favourite character from the Justice League and Justice League Unlimited animated series, and she also showed up in season 2 of 'The Flash' and so I've given her a pass on  my usual rules for purchasing from KM.

The photo doesn't really do her justice, but I'm quite happy with how she's turned out, and she may feature in a Flash crew at some point - I figure Flash, Hawkgirl and some cops are suitably thematic for the CW show, perhaps facing off against Killer Frost, Reverse Flash and some goons. Should be fast and fun. 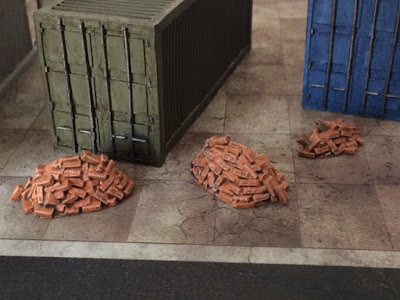 Finally, after seeing how well the bricks on Nightwing's base turned out, I painted the other brick piles from Mars Attacks as they were really quick and simple to do. I'm going to start doing the rest of the Mars Attacks scenery soon. but I think I'm going to need to base the wall sections for stability.