After something like six months, I've finally been able to play a miniatures game against a a person. Pete an I got together to get to grip with 9th Edition 40k, otherwise known as 'excuse me, they can do what now?' 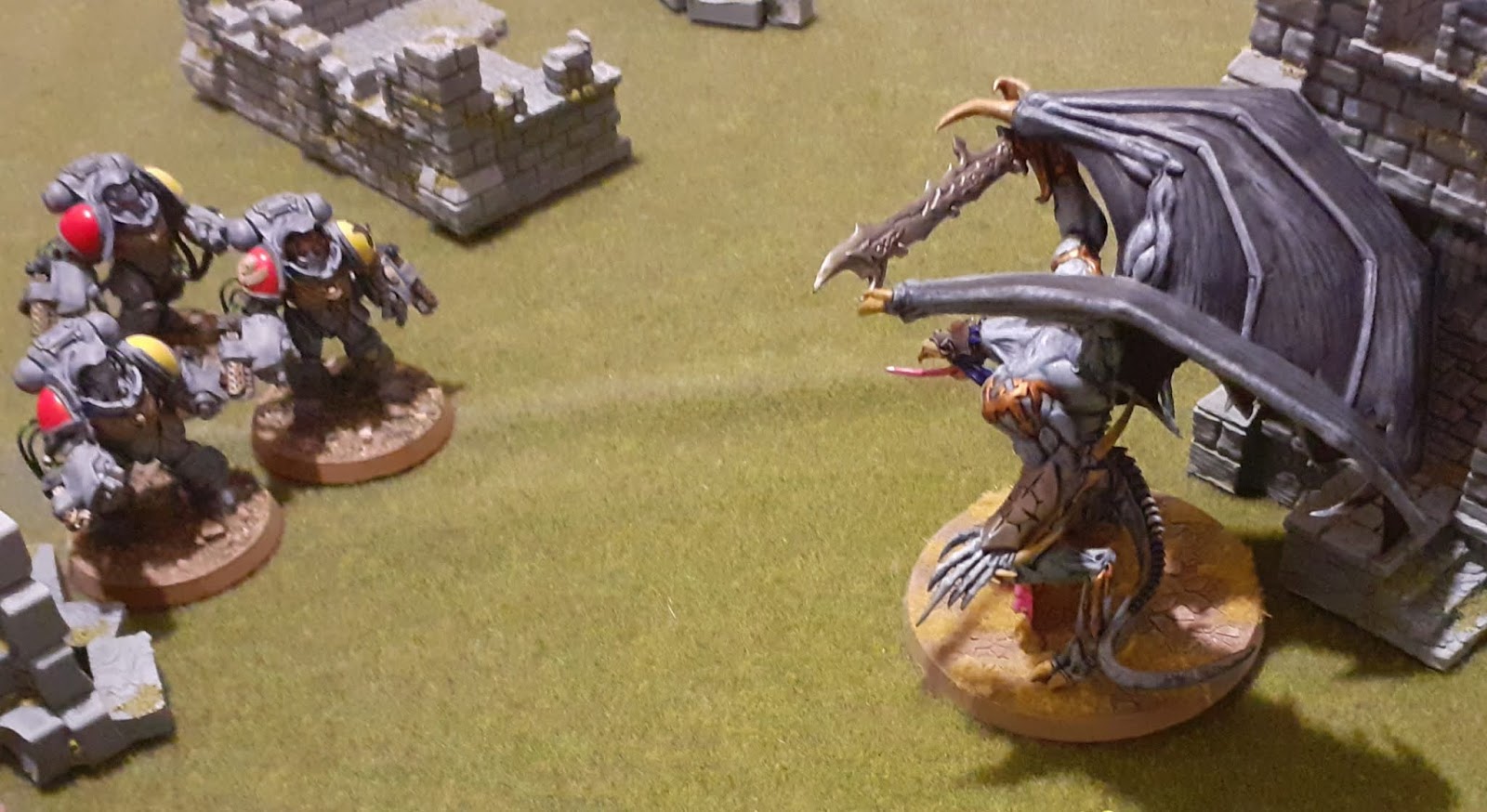 We played a 900 point game using an Open War scenario so we didn't have to worry about the in game admin of primary and secondary objectives. We just had to kill each other. 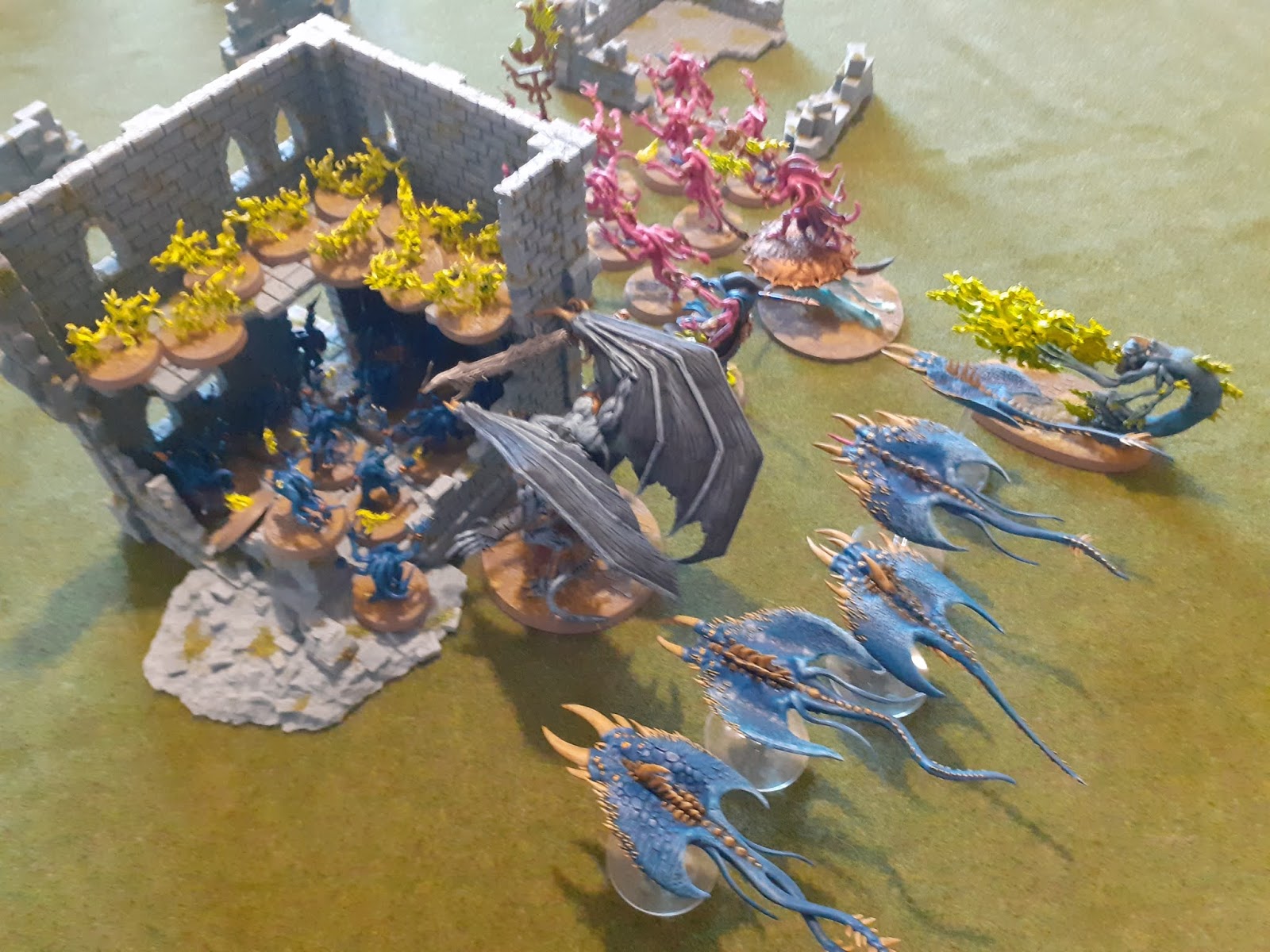 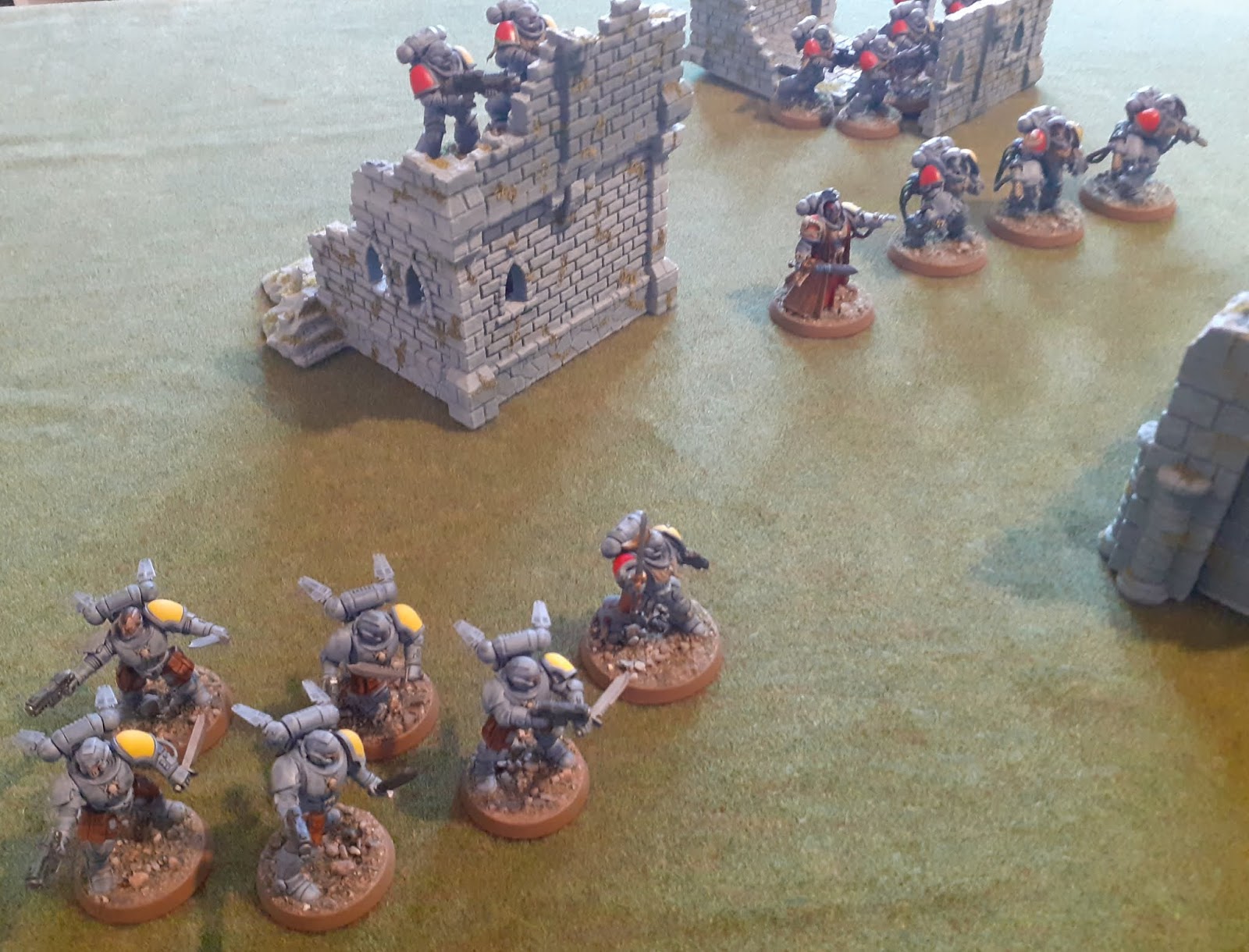 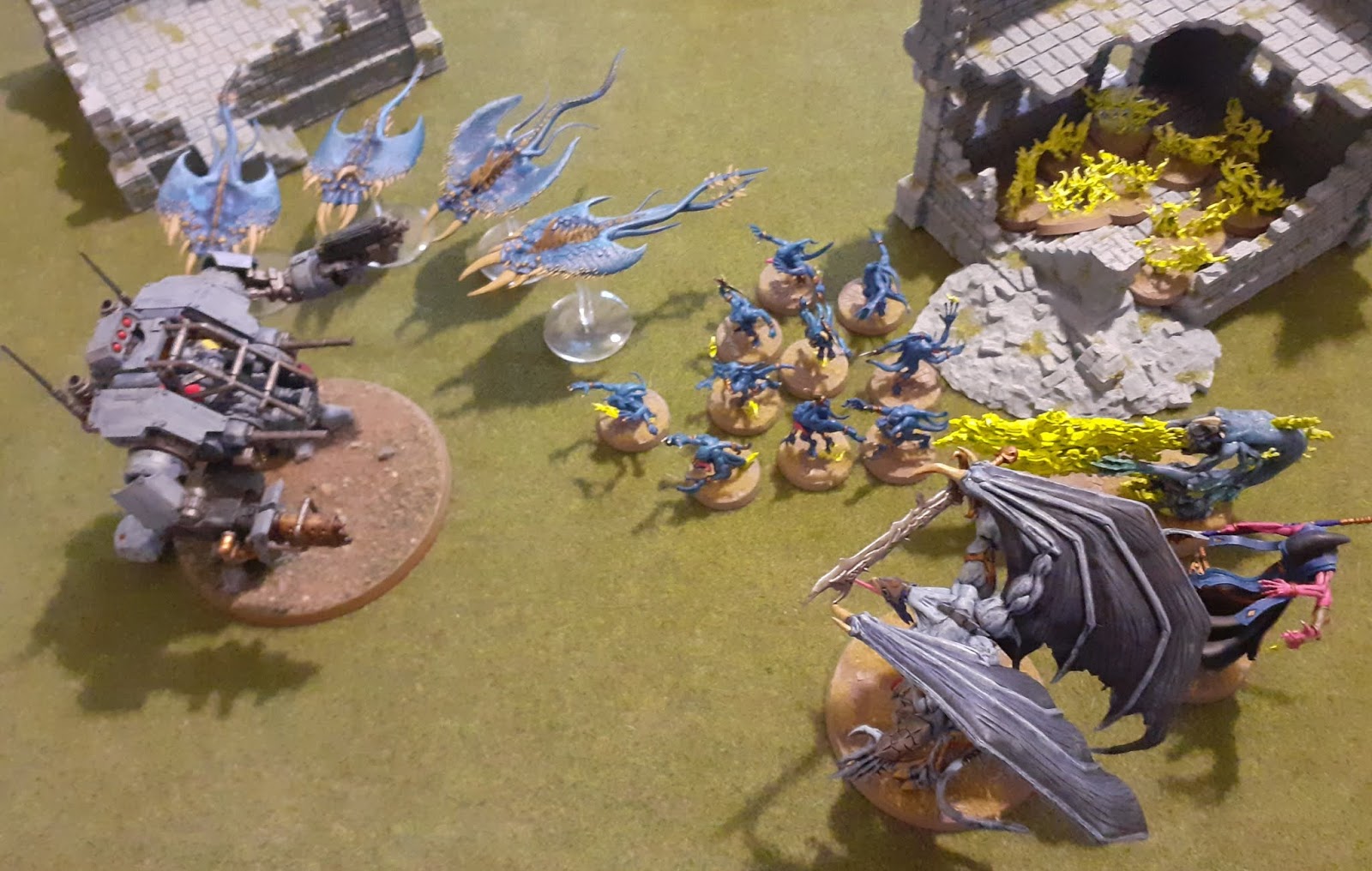 The first turn obviously went to Pete, but I didn't get obliterated by long range firepower because: a) Peye wanted to get close and stab me to death, and b) the 4+ invulnerable save of Tzeentch Daemons is quite good.
I was somewhat appalled to discover that the Invictus Warsuit and Infiltrators could both deploy not very far from my army.
On my turn, as you can see, I took measures to deal with the threat of the Warsuit, spending a chunk of CP on strategems. Unfortunately, what followed was combination of appalling dice rolls and forgetting my own special rules which left the Warsuit still standing and my Daemon Prince half dead. 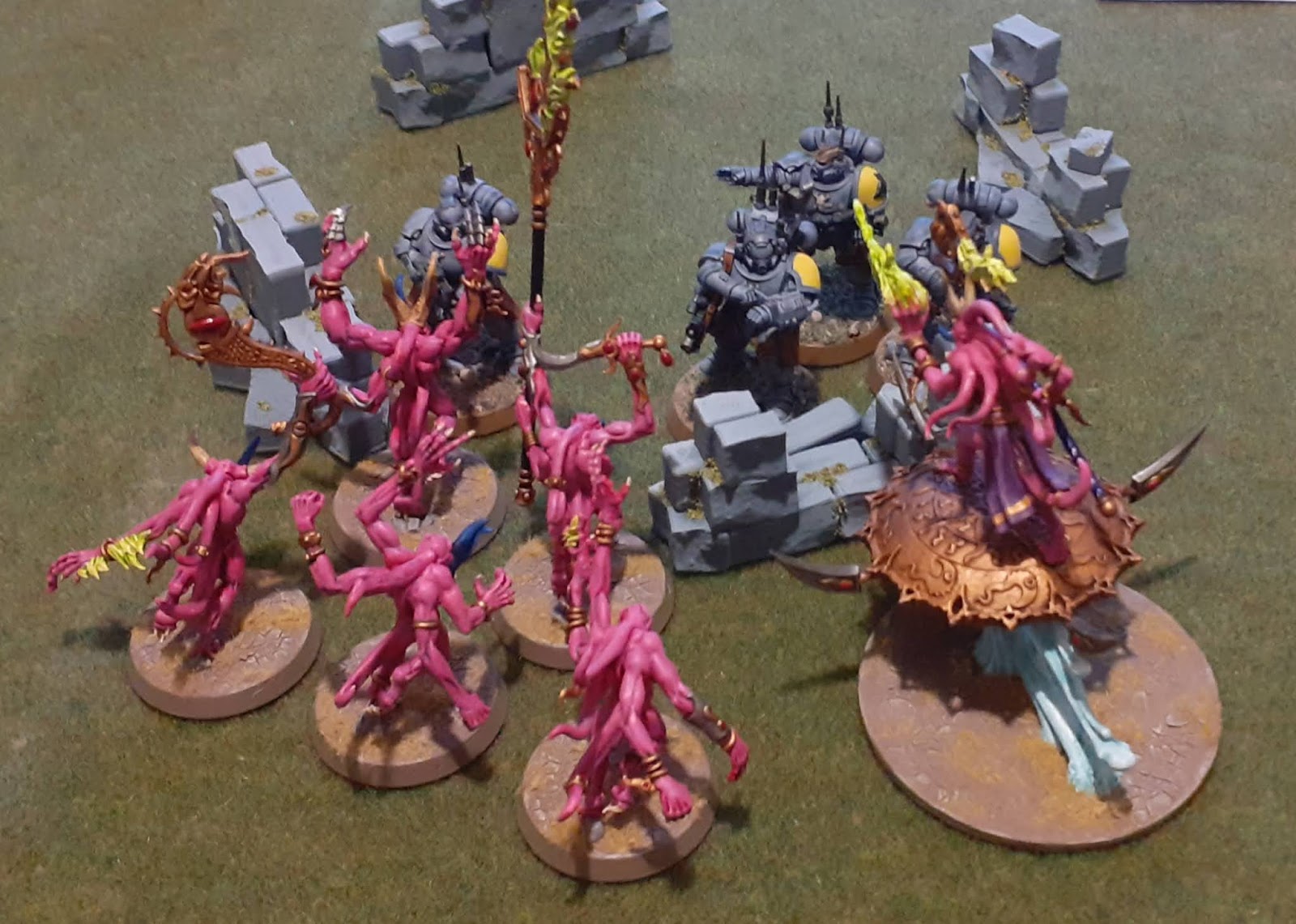 However, let's not kid ourselves that the disaster of first turn was only down to bad luck and a bad memory. I also made bad decisions.
After a volley spell casting and shooting took down one whole space marine, the remains of my Pink Horrors and the Fluxmaster charged into combat only for me to discover that this was not where they should be. Not only do they hit less hard than a damp rag, but... 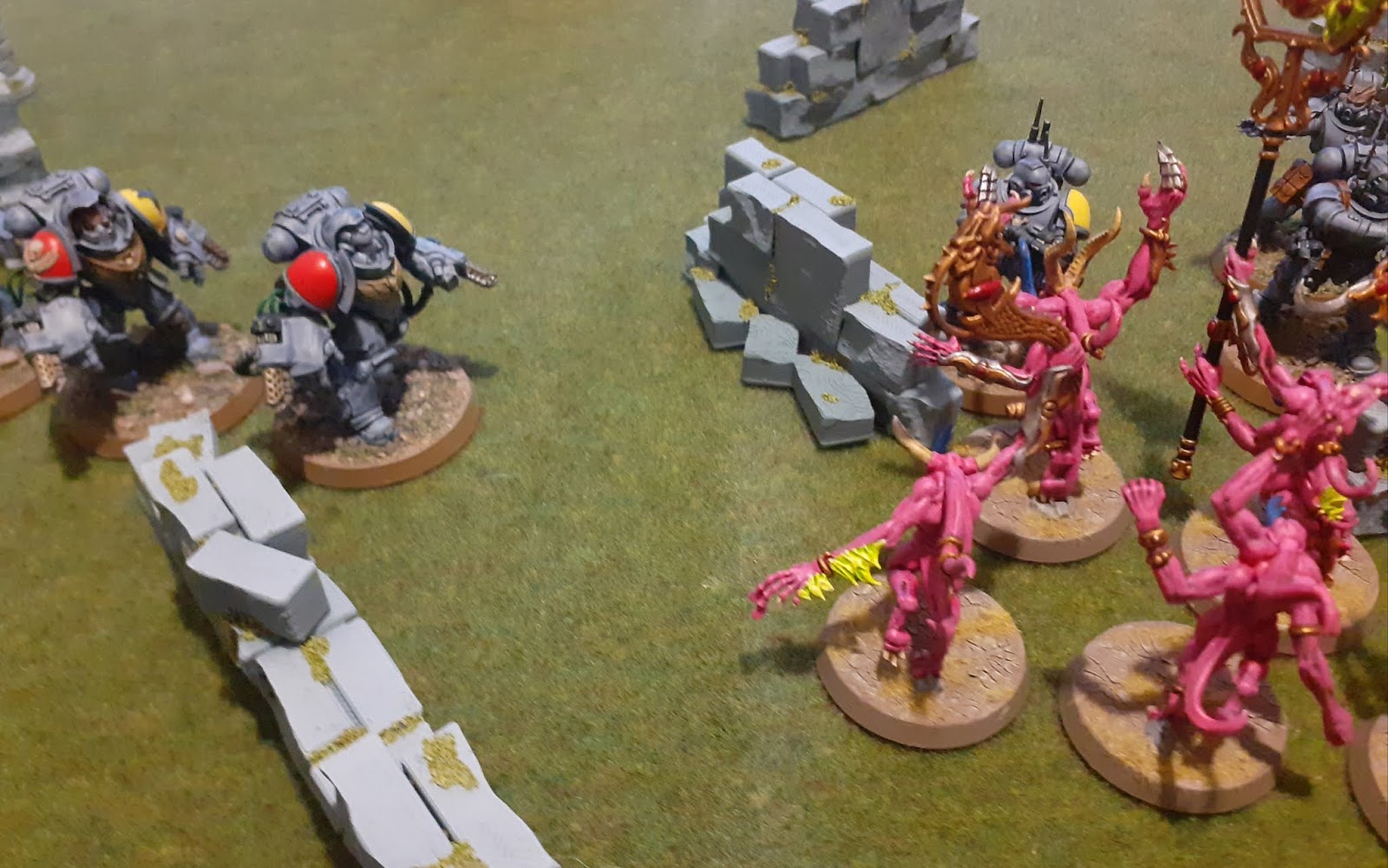 ...it allowed them to get counted charged by Pete's Aggressors.
They died.
The Hounds of Morkai charged the Screamers and the Lieutenant bravely charged the Daemon Prince, but the big fight was a bit of a stalemate, even though my Warlord's strength was beginning to tell. 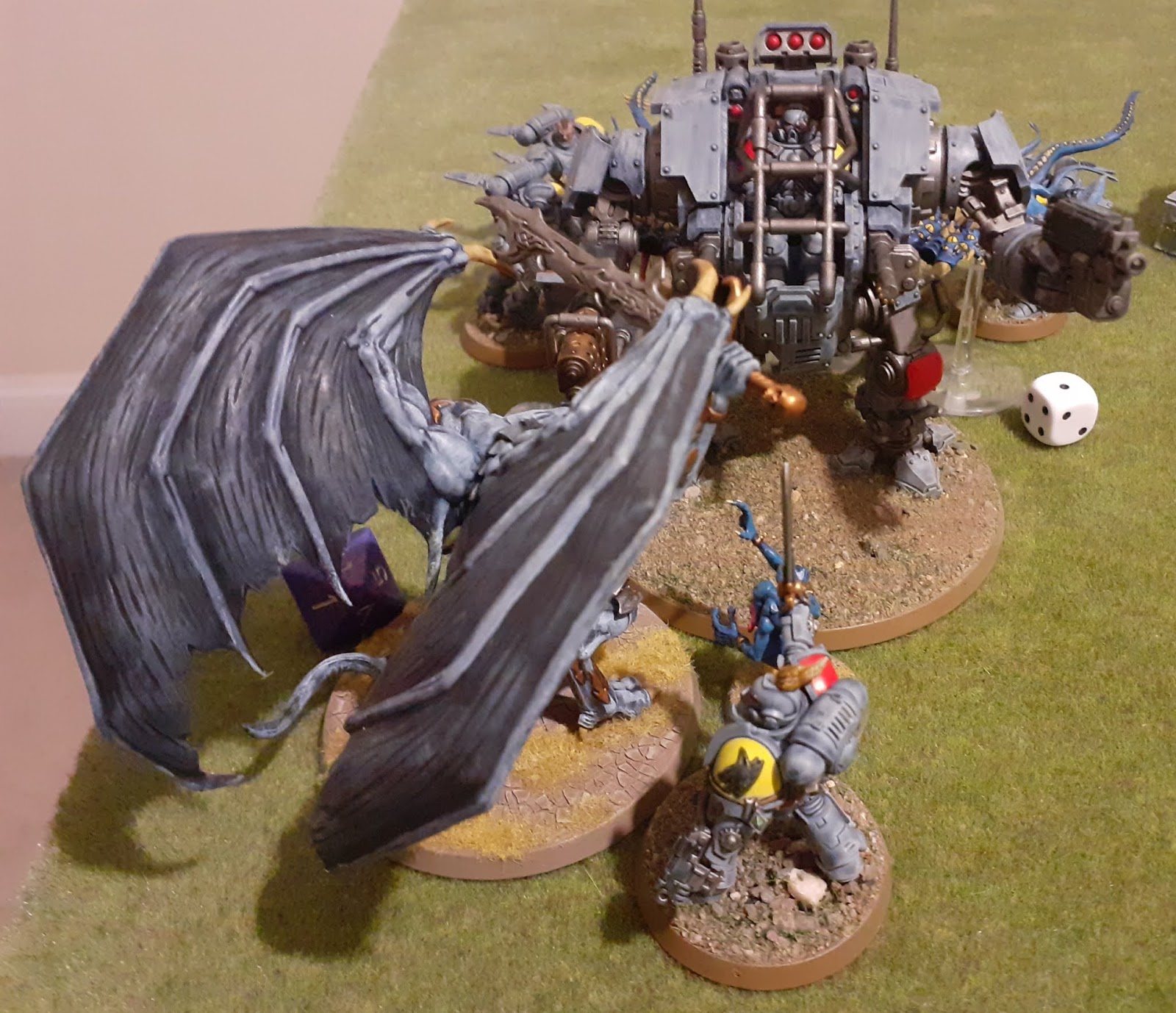 With my right flank gone, all I had to focus on was the fight.
The Daemon Prince finally managed to end the Warsuit, which promptly exploded, wiping out the last Blue Horror and leaving my warlord crippled.
My Flamers also arrived from deep strike and were able to assassinate his Librarian.
At this point I'd killed four whole models.
The following turn saw Pete's firing squad finish off the Flamers (ironically, the Flamers were killed with flamers) whilst my Daemon Prince and Screamers (who had finally worked out that they were actually Strength 6 in combat) demolished the Lieutenant and the last of the Hounds of Morkai. 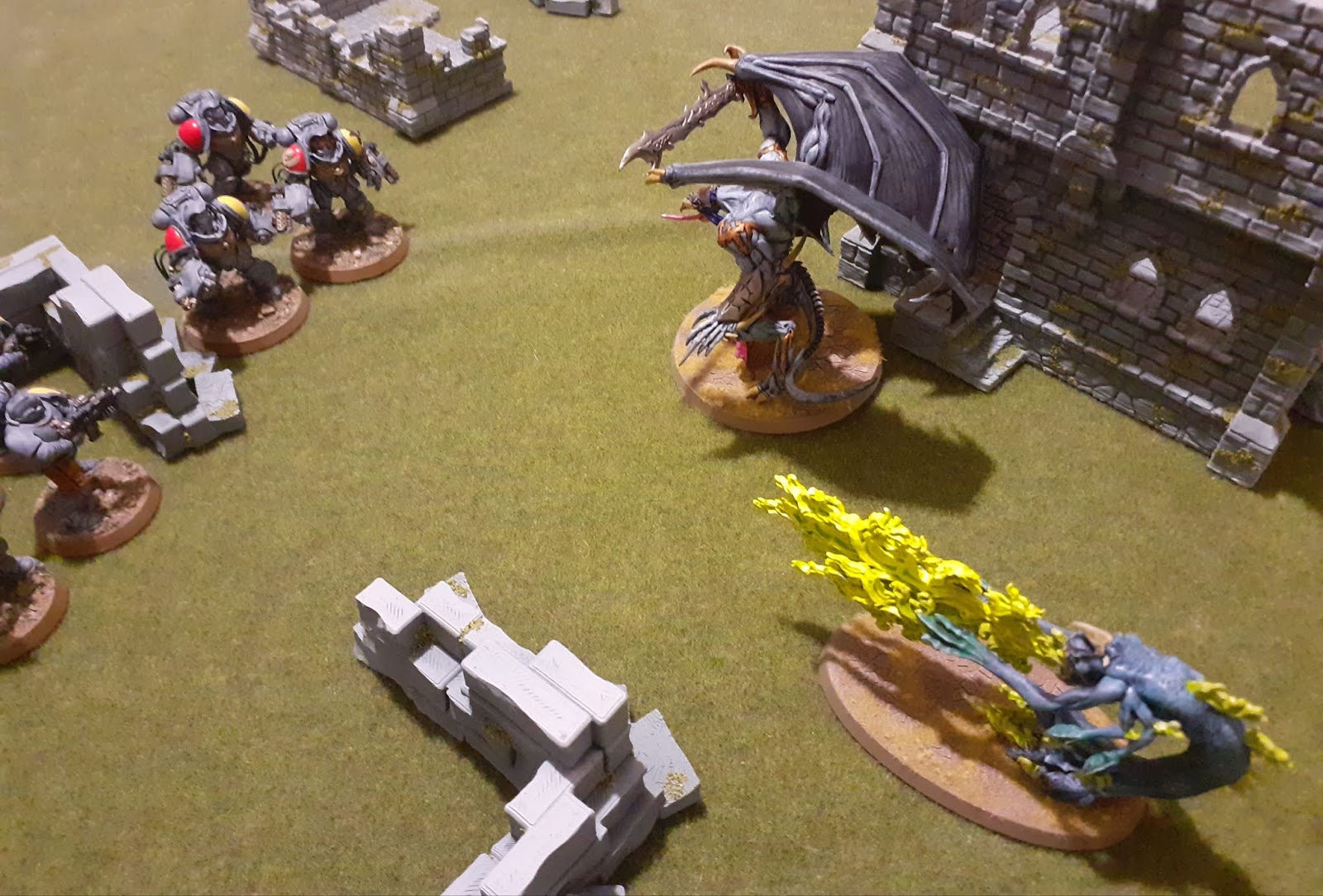 At this point I had just a handful of wounded models left. A situation that go worse when massed Bolt Rifle fire deleted the Changeling and left the Daemon Prince with just a single wound.
I decided that there was nothing for it but to get stuck in and Daemon Prince went for the Aggressors. Psychic power and shooting killed one and the inevitable overwatch was taken by the Exalted Flamer, which survived thanks to Pete rolling four ones for the number of auto hitting shots (they clearly used their fuel against the Flamers).
The Daemon Prince made short work of the Aggressors (which lough much harder to kill than they are) but was now stood in front of three units of Marines with just a single wound. He did, however, have a 3+ rerollable invulnerable save...he might make it. 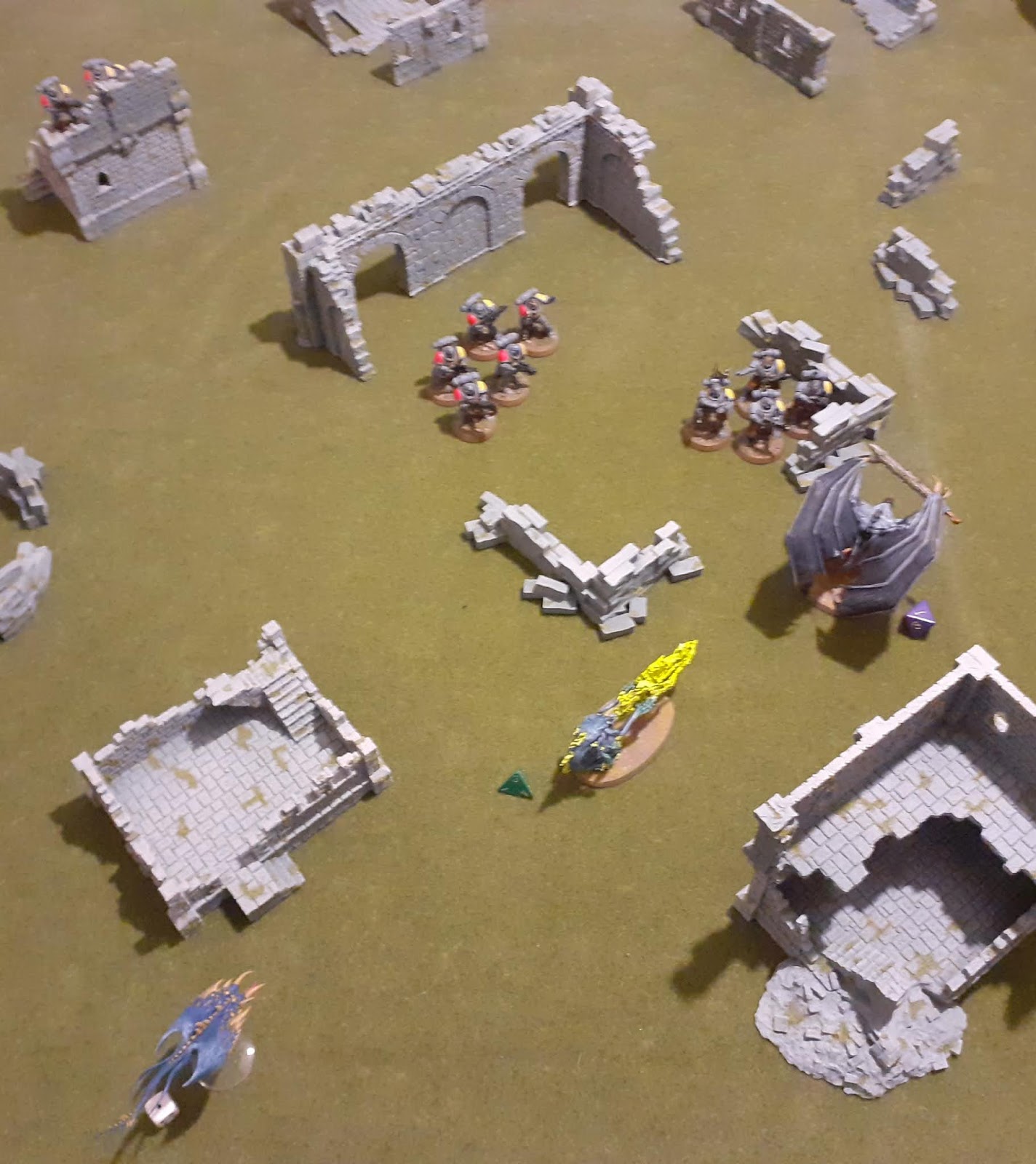 Let's take a moment to appreciate the fact that at this point in the proceedings, I was technically winning...although I only had 5 wounds left on the board.
Pete opened fire, and in the dampers of damp sequins, my Daemon Prince failed the first save he was required to make...three times. An 11 point swing in victory points meant Pete's lead was now probably unassailable.
The Exalted Flamer and Screamer charged the Infiltrators in the hope of keeping the gap respectable and narrowly failed to kill the unit as it was now Pete's turn to spot a rule he'd missed all game and realise that they could ignore the first failed save each turn.
The counter charge finished off the Exalted Flamer and the defeat was complete: 47 - 29.
All in all, this was a really fun try out of both armies. We both got things wrong and both learned things we'd need to remember in future.
I learned that my Pink Horrors and Heralds should avoid combat, if at all possible. Screamers should be pointed at Marines and remember to fly over enemy units if they have the option. The Daemon Prince is really dangerous in close combat, but needs some protection tion from enemy shooting.
I think Pete learned that just because he can set up really close to the enemy, he probably shouldn't (he was lucky the Warsuit wasn't destroyed on the first turn), also his Lieutenant would probably have been better off stood with his gunline giving them bonuses to wound, as he wasn't much to write home about in melee.
Despite some ropey dice and memories, I was pleased that they game did seem to depend more on our decisions that I remember 40k doing. It was a fun game and I'm looking forward to playing more of it.
Posted by Kieron at 00:39