It has been a good long while since I last played Bolt Action, and so to take a break from 7TV and Lord of the Rings, Matt and I took a trip back to the far east to pit my Soviets against his Japanese.
However, this time we wouldn't be revisiting the Khalkyn Gol incident in 1939 with tiny tanks and inexperienced troops. No, we would venture into 1945 and the Soviet offensive in Manchuria and Mongolia in which they declared war on Japan as part of an allied pact to finish off the war in the east.
This offensive pitted the might of the Soviet war machine, which had ground its way across Europe with increasngly large armoured vehicles, against the remnants of the Japanese Empire, which hadn't.
Let's play Tank War! 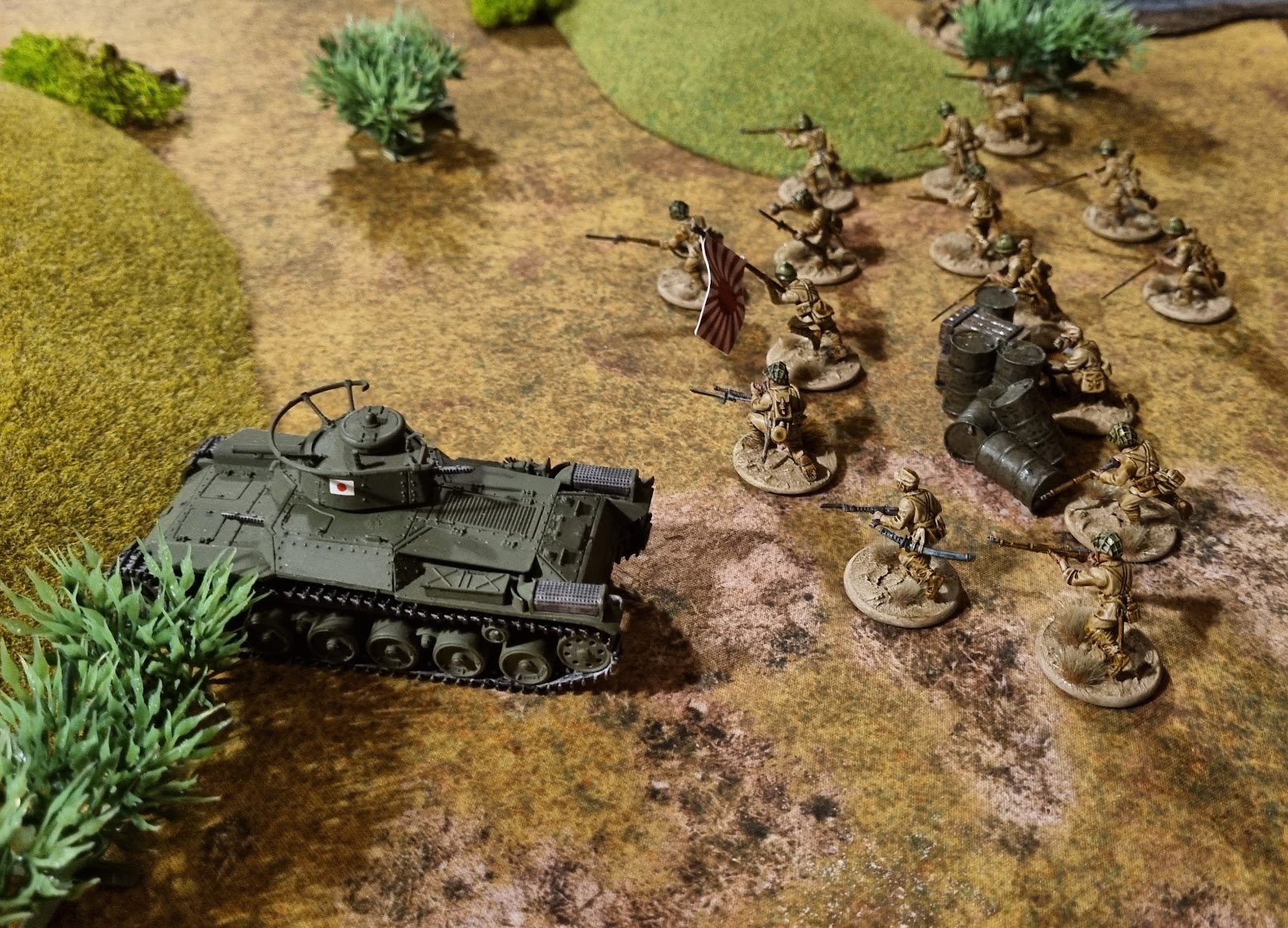 We played fairly fast and loose with the Tank War rules and the Manchuria Theatre selectors as we were working within the confines of what our collections would allow. Matt doesn't have enough transports (or tanks) for a decent sized game and needed to include somethings not from the selector, and I mistook an SU-122 for an SU-85 in my list building and put something in my list that shouldn't be there.
Hopefully writing about this on a blog won't result in the Rules Police knocking on my door charging me with crimes against historical accuracy. 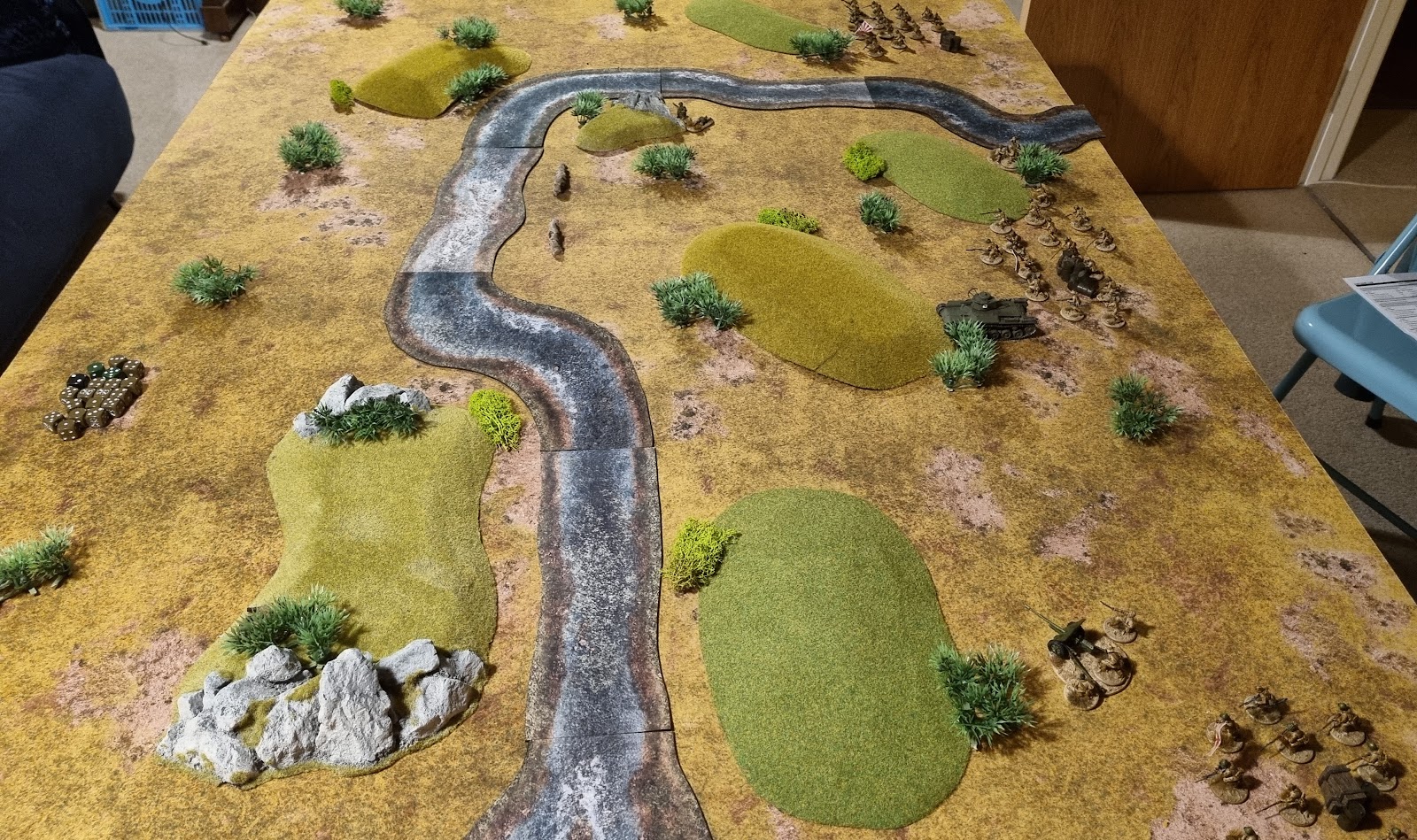 We randomly rolled a Point Defence scenario and decided that due to the lack of transport and the fact that this was a massive Soviet offensive that Matt would be the defender, trying to keep me off three objectives.
Matt's force looked something like this:
1 Type 1 Chi-He Medium Tank (Command)
1 Type 97 Chi-Ha Medium Tank
2 Type 97-Kai Shinhoto Chi-Ha Medium Tanks
3 IJA Infantry Squads (15 men + LMG)
4 Suicide Anti-Tank Teams
1 Flame Thrower Team
1 Medium Mortar Team
1 Sniper Team
1 Type 1 47mm AT Gun 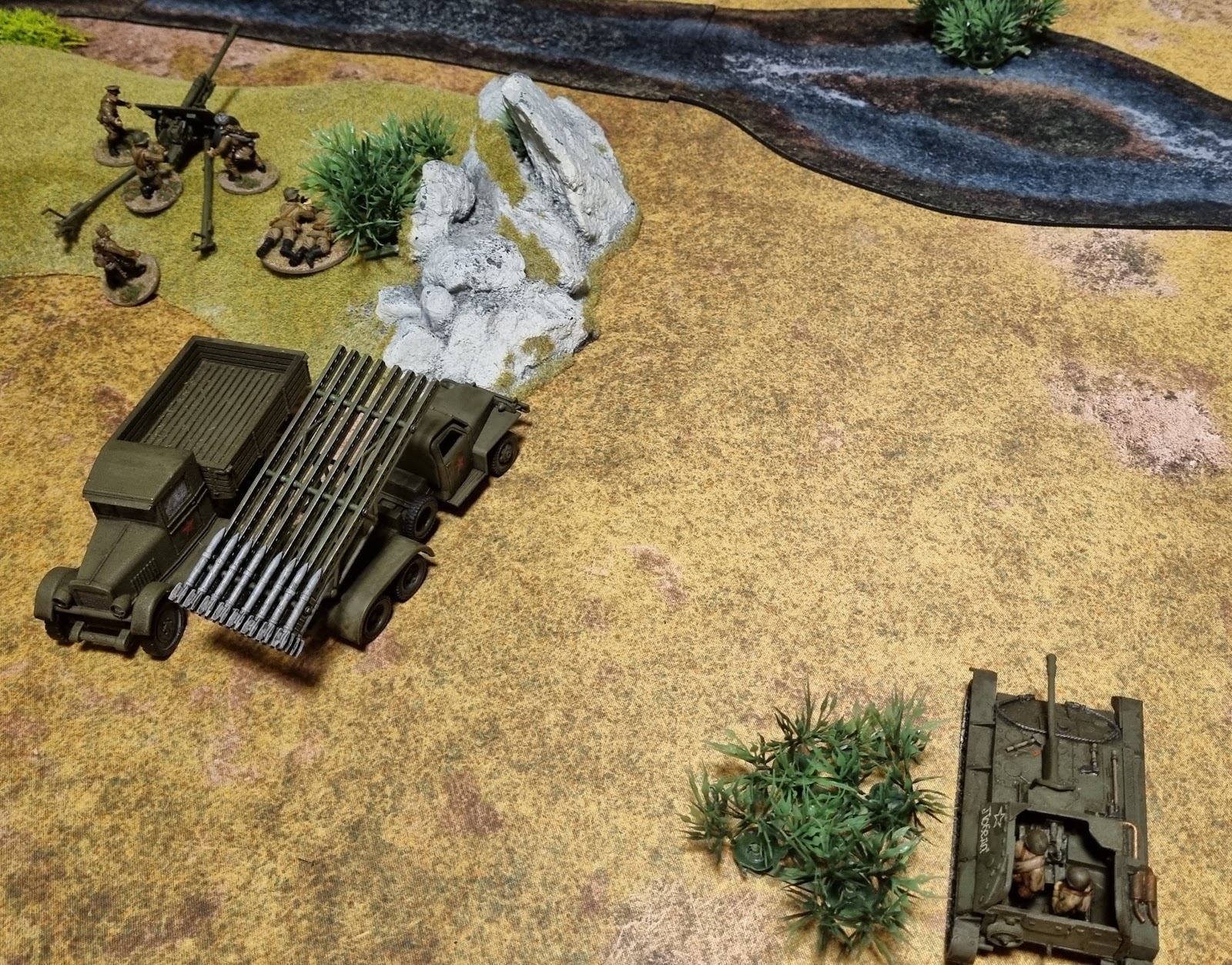 Arrayed against this I had almost all of my Soviet vehicles on the table, some of them for the first time, and a dearth of infantry, which would present problems later.
1 IS-2 Heavy Tank (Command)
2 T-34/76 Medium Tanks
1 SU-122 Self-Propelled Gun
1 SU-76 Self-Propelled Gun (Free)
1 Katyusha Rocket Launcher
2 Tank Rider Squads (9 men)
1 Sniper Team
1 ZIS-3 Divisional Gun
1 Truck
The game should have begun with a preparatory bombardment, but didn't because I always roll a one. It happens so regularly that I'm not even disappointed anymore.
TURN 1 Deciding to split my forces (which always go well, historically speaking) I advanced an armoured spearhead onto the left flank, opening fire to little effect. Their goal was to push towards the Japanese line, kill everyone there and allow the Tank Riders on the T-34 to capture the objective.
On the right (see above) I put almost all of my artillery: the Katyusha, the ZIS-3 and the SU-76. Their goal was to soften up the defenders opposite ready for the second group of Tank Riders and their T-34 to come crashing in from the flank later in the game. Unfortunately, their firing drew a blank, but the sniper, who was deployed amongst them was able to drop one of the Japanese AT gun crew.
First blood to Mother Russia.
TURN 2
The defensive fire came in hot as a mortar shell smashed down onto the the ZIS-3 killing two of the crew and causing the rest to run. Although I still had plenty of firepower on this half, I was concerned that they would be very vulnerable to enemy tanks making any kind of counter attack, an although Japanese tanks aren't very heavily armoured, I wasn't sure that an inexperienced SU-76 would be able to stop them. 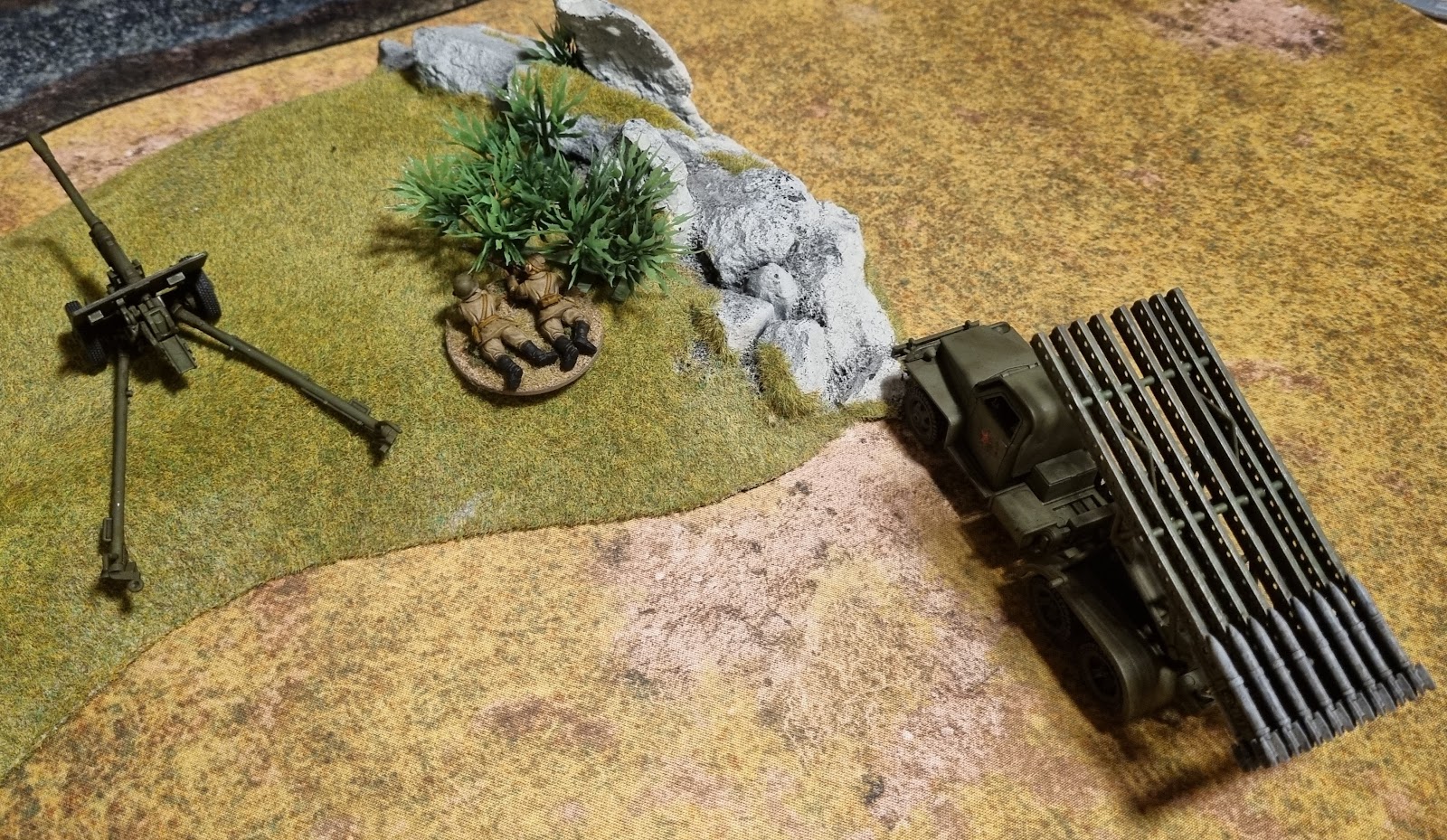 Japanese Chi-Ha tanks did begin to trundle on to the battlefield, but their shooting proved to be somewhat inaccurate, and the when the Soviet tanks countered, the light hull armour of the Chi-Has was no match for the IS-2 or T-34. 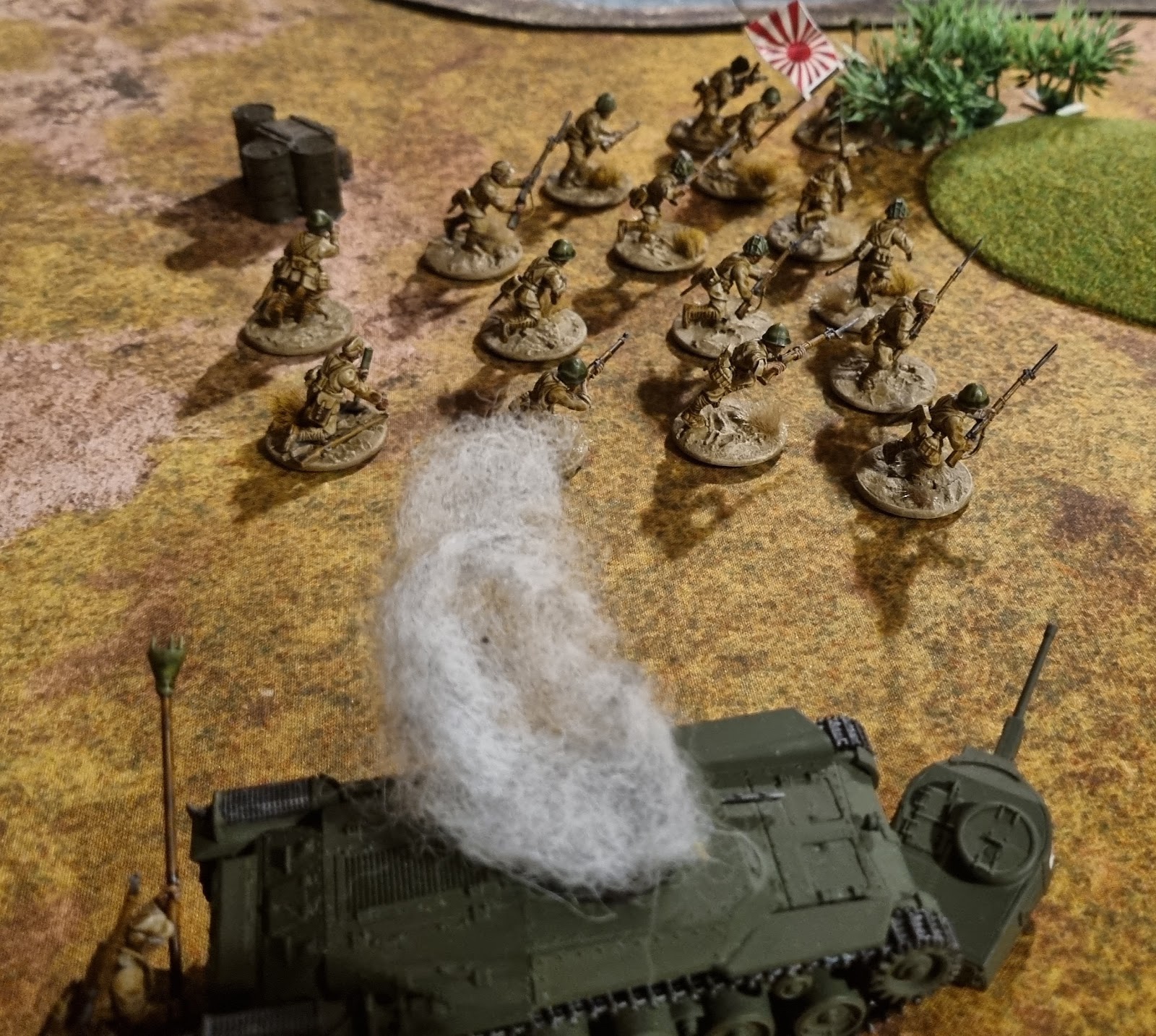 However, despite losing two tanks in quick succession, the Japanese had lost barely any infantry. If I was going to stand any chance of driving them off, I would need those big units to be softened up before the Tank Riders got there. 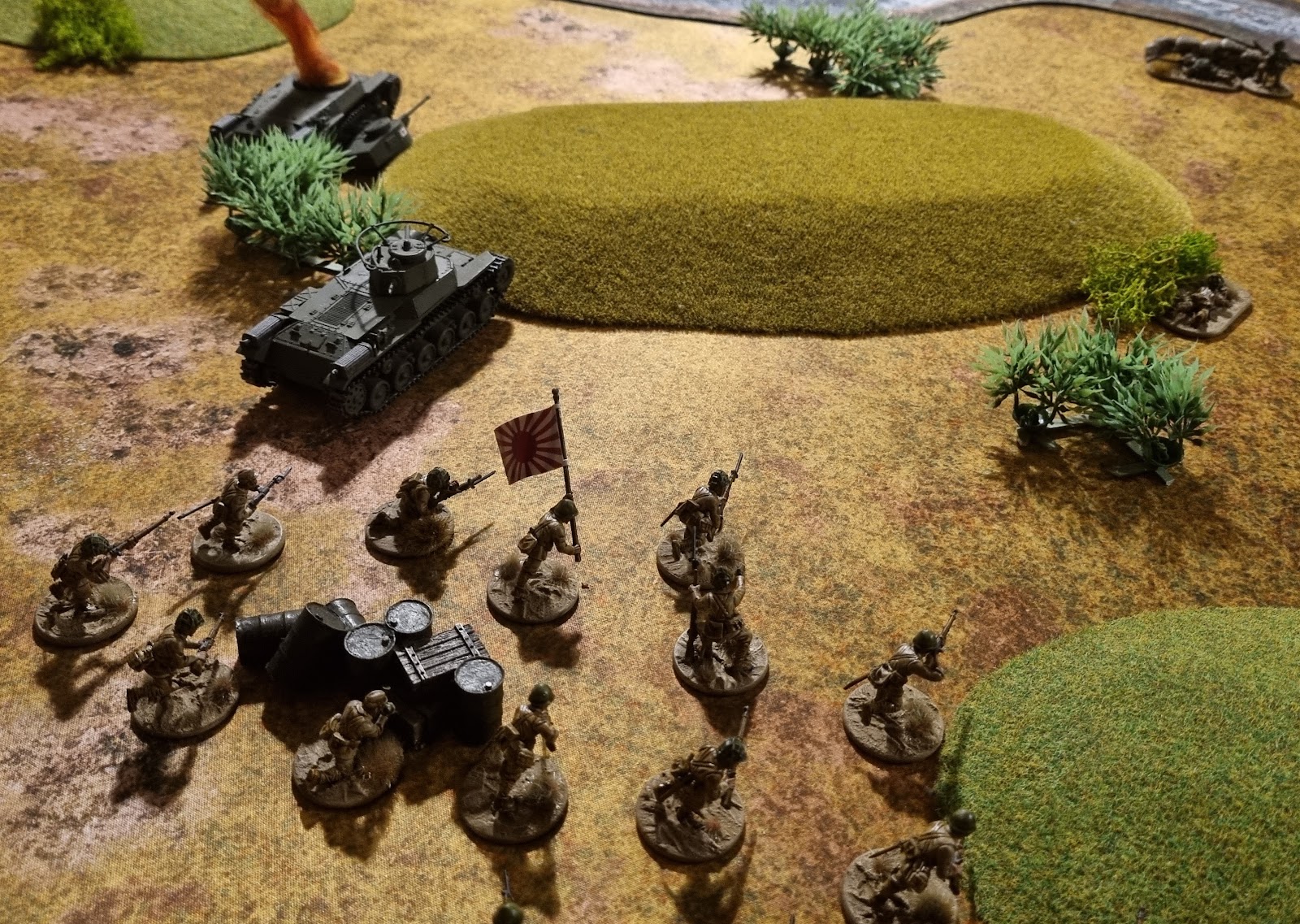 To make matters worse, Matt had rumbled that I wasn't going to push for the central objective and began to advance the infantry he had there towards my left. He also realised that simply firing at my T-34 would force the Tank Riders to dismount, severely slowing them down.
TURN 3
With the Tank Riders dismounted and the Japanese infantry in the centre advancing, I decided to push the T-34 towards the middle to counter the threat. Whilst this was happening, the IS-2 span its turret and managed to thread the needle and detonate the Japanese command tank, severely reducing the threat of a push towards my artillery. 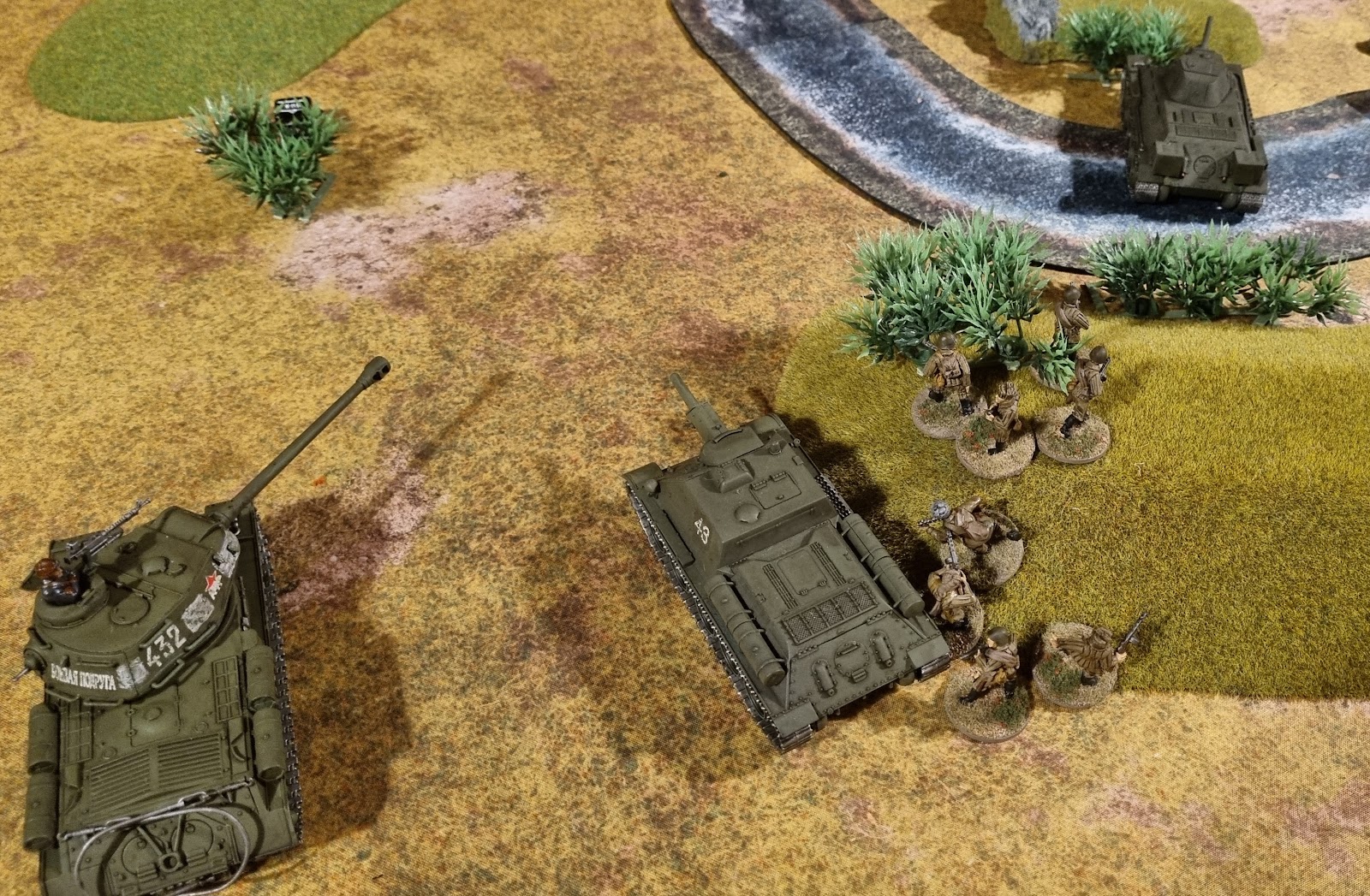 With their armoured wing in disarray, the Japanese infantry stepped up to meet the threat. In the centre they charged the T-34 and narrowly missed hurting the tanks due to the difficulty of hitting moving tanks. On my left the infantry advanced to the crest of a hill to pour fire into the dismounted Tank Riders, further focusing on slowing the advance, whilst suicide anti-tank teams snuck forwards. 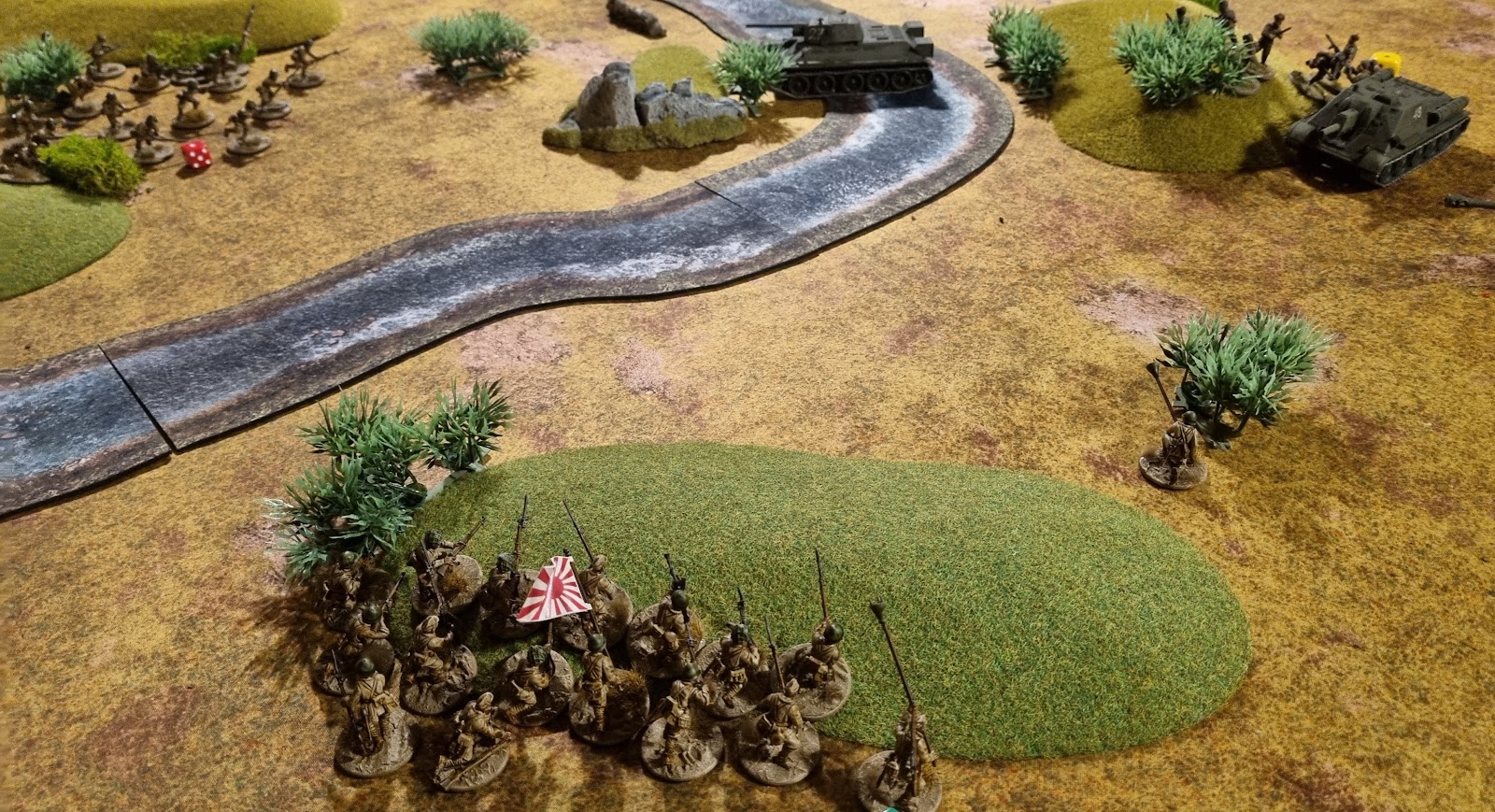 TURN 4
At this point in the battle, things looked grim for me. One unit of Tank Riders was pinned down miles from its objective, whilst the other had failed to appear from reserve. The origami Japanese tanks had folded, the infantry was still rock solid and on the attack, support by guys with bombs on sticks.
However, it was at this point that the dice gods decided to simultaneously repay me for the failed bombardment roll, whilst cursing Matt for some heinous crime he had committed in a former lifetime. Given what was about to unfold, Matt had done something REALLY bad. 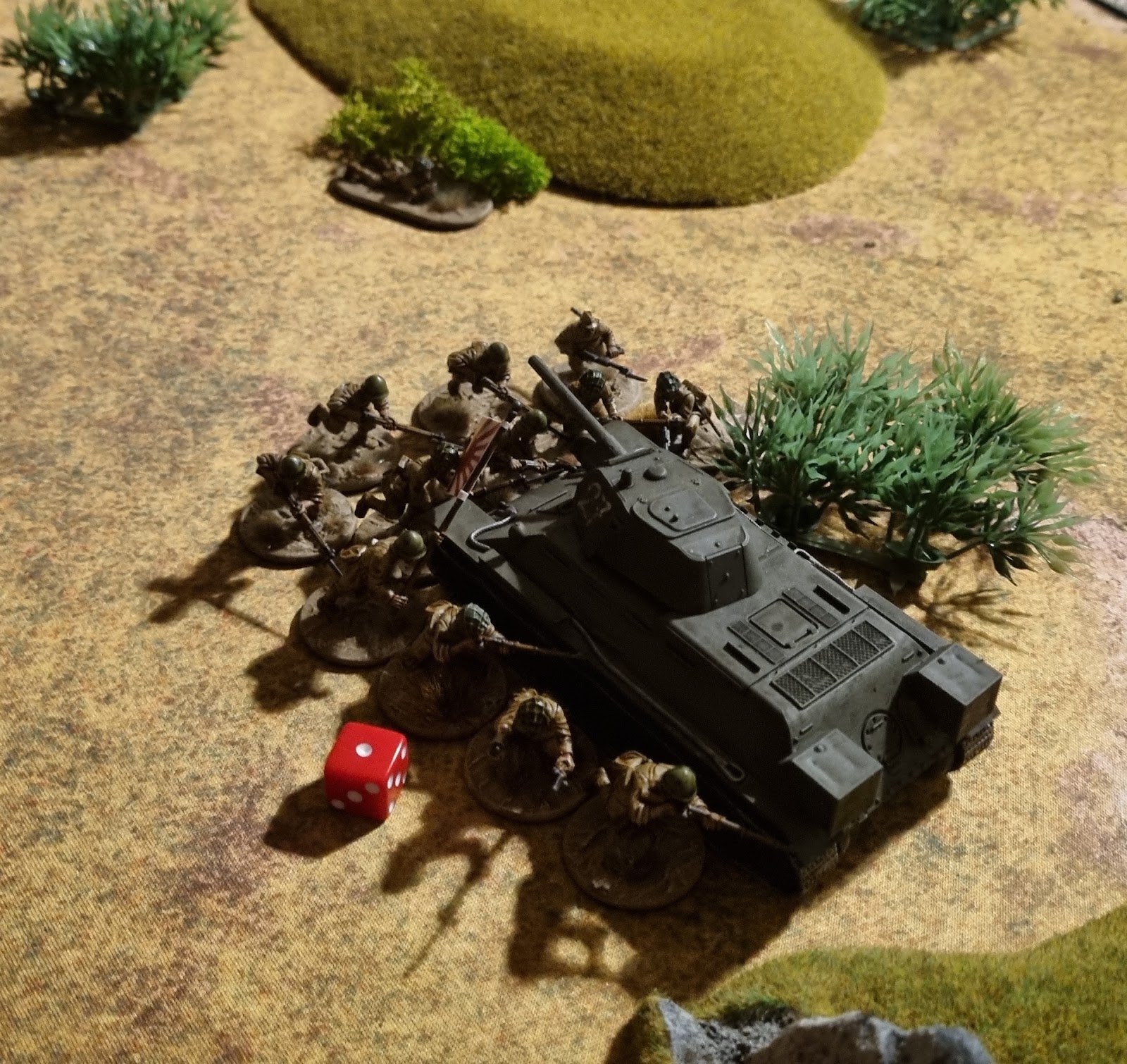 Firstly, his squad of 12 men armed with anti-tank grenades only managed a single hit (needing 4+) on the T-34 and were subsequently sprayed with point blank fire from the tank, cutting the unit in half.
The final Chi-Ha arrived, and having worked out my fairly obvious plan, set about driving full steam towards the artillery park. However, it didn't last long and my reserves arrived, with the T-34 taking out the Chi-Ha in short order. 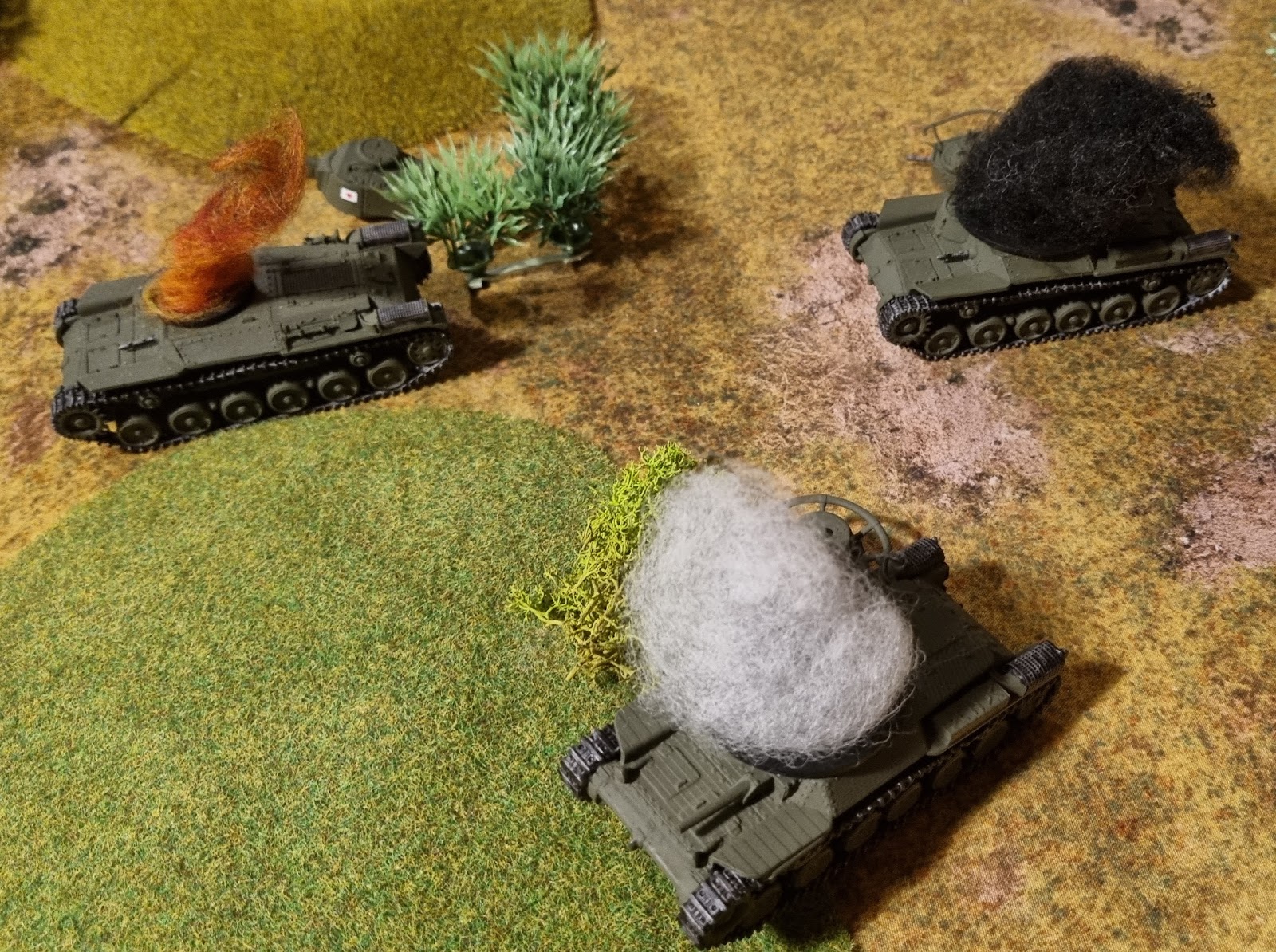 To make matters worse, the Katyusha managed to score a hit on the Japanese infantry on my right and then the Tank Riders dismounted, their SMG fire ripped through the defenders, leaving just a single man defending the objective from the Soviet horde.
However, all was not lost. In a bid to make the unit flee, I had used an exception hit to remove the sergeant, leaving the LMG in place, which passed its morale test and began returning fire. The AT gun turned in place and took out the T-34, leaving the infantry unsupported, and the sniper repositioned to add fire and try to whittle down the Tank Riders.
On the right, my attack was further stalled by a well-placed mortar shell hitting the SU-122 and some of the infantry, further pinning them in place. My IS-2 focused its might on killing the suicide bombers wending their way towards it.
Finally, and ominously, the flamethrower Matt had been holding in reserve entered the field, took aim at the Tank Riders on my right and...missed. My chances of capturing the objective would all depend on who drew a dice out the box first. 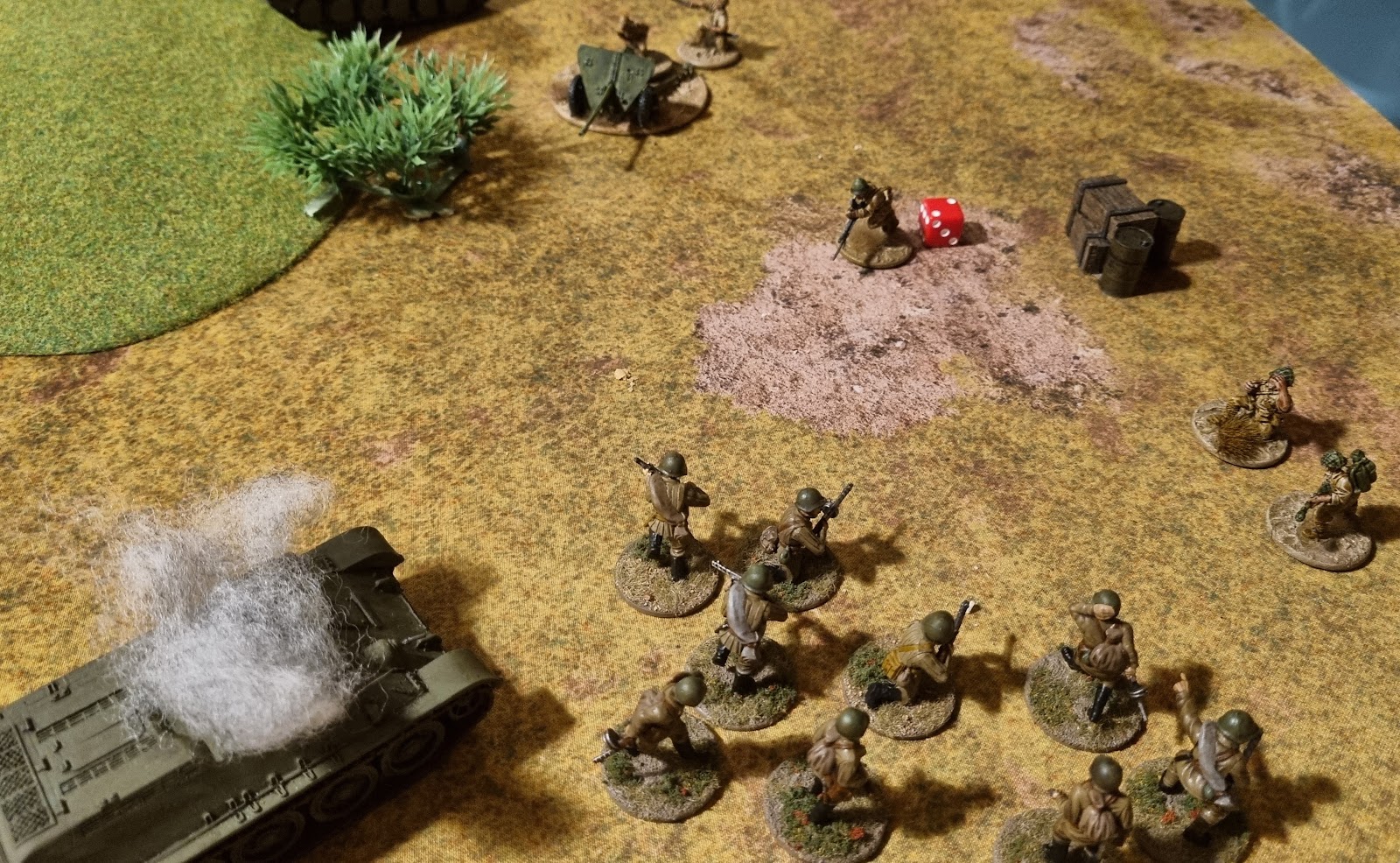 TURN 5
Whatever Matt did in a former life must have been REALLY, REALLY bad. I got the first dice and my Tank Riders on the right executed the flamethrower team and advanced onto the objective. All they had to do was weather the storm from the scattered remnants of the Japanese left flank and I would be guaranteed at least a draw. 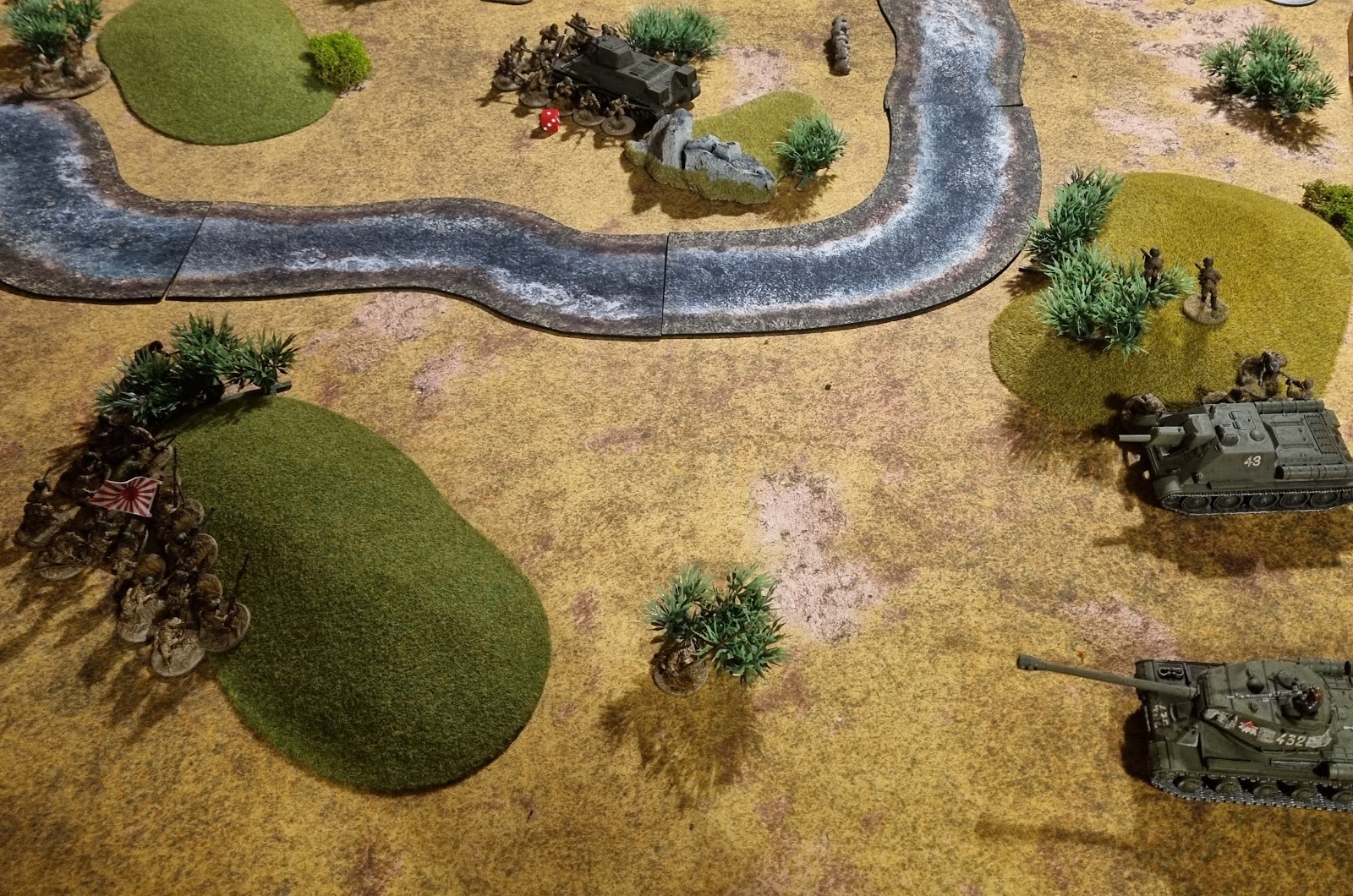 Matt saw that the fight against the T-34 in the centre wasn't crucial and would ultimately be unsuccessful thanks to the casualties he'd taken and so with drew to pour more fire onto the stranded Tank Riders on my left.
However, this left the T-34 free to move to intervene in the other flank and if I kept control of the objective I'd already captured, there was still an outside chance of me snatching a win. The final Japanese infantry unit, hunkered down behind a hill was a massive obstacle to this and the IS-2 was unable to make a significant impact on it.
Enter the Katyusha. It repositioned and unloaded at the tightly packed infantry. Two sixes were rolled, one for the unit itself, and one for the suicide bomber stood with them, allowing me to overlap templates. The impact was devastating and the remains of the unit fled, leaving the objective clear.
He clearly did something REALLY, REALLY, REALLY bad. 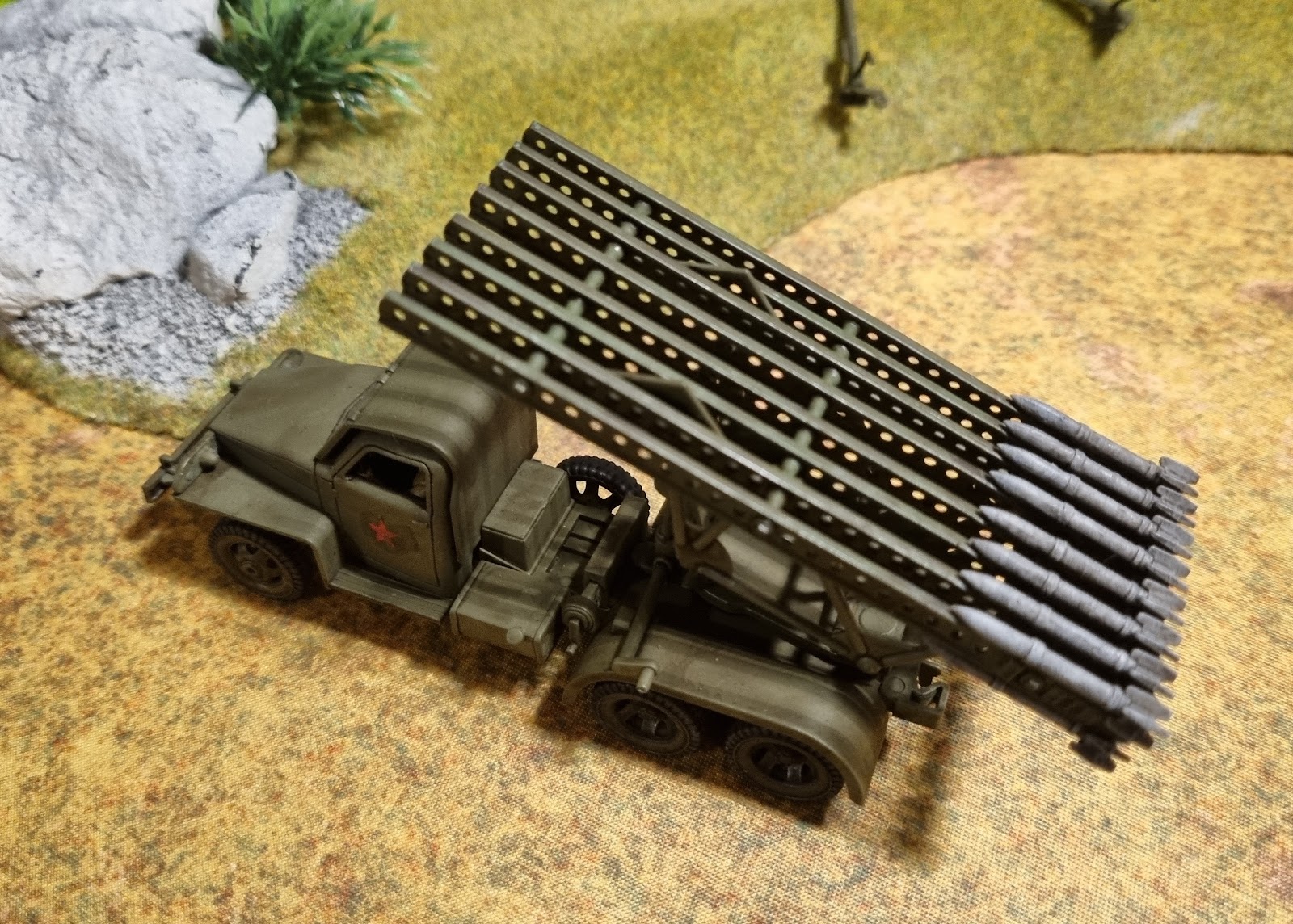 TURN 6
The intervention of the T-34 ultimately secured the right hand objective for me. It killed off the crew of the AT gun, and combined with the Tank Riders going down for survivability, a sniper and a lone LMG were not going to clear them out.
To add injury to insult, the SU-76 finally managed to hit something and wiped out the sniper team with a point blank shot. 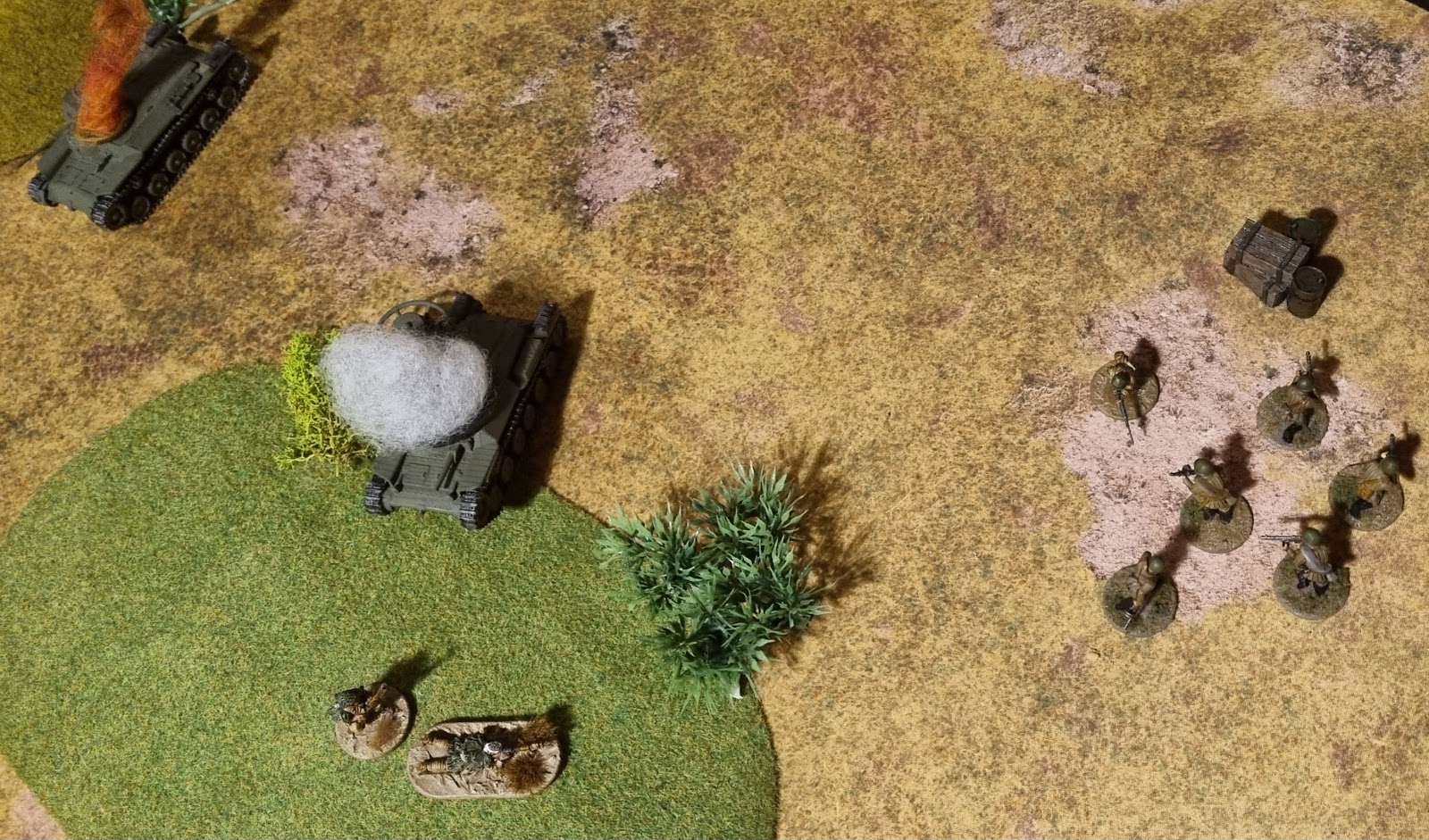 Now came the long shot, and sequencing was everything. I had to wait until the end of the turn to try to remount to Tank Riders as going to early would allow Matt to dismount them again simply by shooting at the SU-122. However, this exposed them to potential further pins from the few units Matt had left.
The IS-2 helped out by removing the threat of the mortar with its massed machine-gun fire and the remaining infantry unit misfired and failed to score any hits.
The orders test was passed and the Tank Riders remounted. The SU-122 also passed an orders test and advanced as far as it could go. All I needed was for there to be another turn... 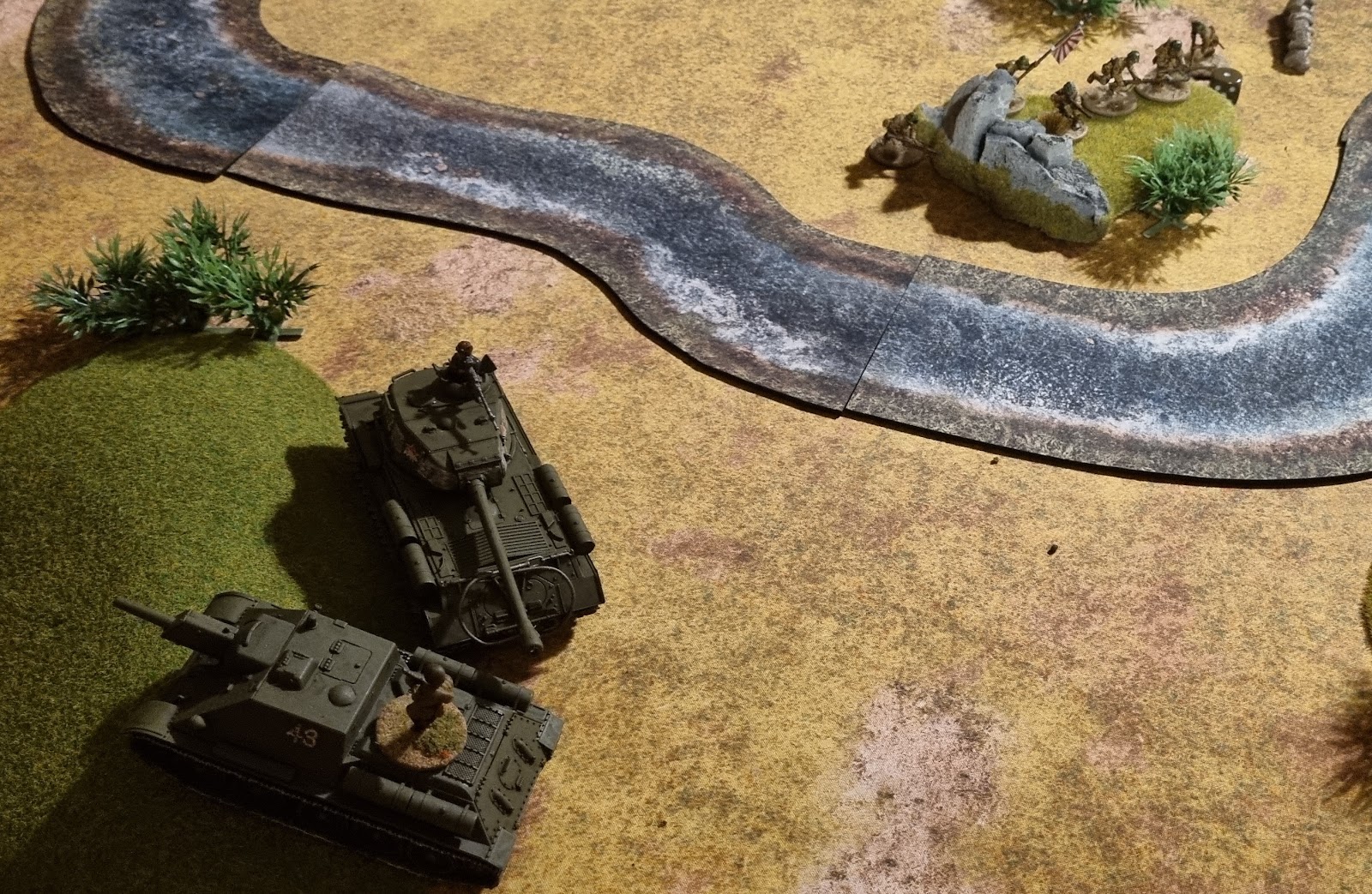 ...but there wasn't.
RESULT - DRAW
AFTERMATH
That was a really fun game although Matt suffered from incredibly bad luck in turns four and five in  both the sequence of orders dice being drawn and in the dice rolled on both sides.
My flank attack worked as planned, just, but I was far too slow advancing, meaning that I was too far away at the end of the game. I was also severely hindered by a lack of infantry units, meaning that I had no redundancy and Matt just had to stop one unit to prevent a loss. Were I to play this again, I'd put a squad of infantry in the truck, rather than use it to tow the ZIS-3.
Matt was intent on stopping me, and almost did, although it cost him all but about 10 men. We got a taste of the Manchurian campaign, such as it was, as the Japanese were unable to stem the tide of Soviet armour, although fought doggedly in defence.
I like this little played theatre of the World War II. The relatively open terrain makes for a very different game to slugging it out in across fields of France or through the densely packed cities of Eastern Europe. I've never played Bolt Action set in North Africa, but I'd imagine it has some of the same feeling to it.
Posted by Kieron at 14:37