A couple of weeks ago I played my first game of Flames of War since Christmas. I haven't posted about it until now as I've been having some trouble sending myself the pictures from my phone (hence the poor quality). However, I've now managed this and so here goes (it's brief because I can't remember much)...
It was a 1750 point Late War game between me and Trev. As I'm still missing a couple of units for my infantry company, I was once again rolling out Schwere Panzerkompanie Bake (free PDF list!) featuring the following:
HQ - 1 Panther Tank
Panzer Platoon 1 - 3 Panther Tanks
Panzer Platoon 2 - 3 Panther Tanks
Gebirgsjager Platoon
Gebirgsjager Platoon
Sporadic Air Support
Facing my somewhat sparse forces were Trev's Russians. I don't kn0w exactly what list he was using, but it was mechanised infantry and looked something like this:

HQ
Loads of Russians with SMGs
Even more Russians with SMGs
Some more Russians with HMGs
A Few more Russians with Mortars
2 Small Anti-Tank Guns
5 T-34 Tanks
5 T-34 Tanks
4 Katyusha Rocket Launchers
Limited Air Support
Basically, I was massively outnumbered. Although my Panthers had the advantage of range and penetration against the T-34s, they are weak against Air Support, Artillery and Infantry. If you throw in the fact that we were playing a scenario where half of or armies would only begin to turn up on turn three, it would be entirely possible for focused artillery and air support could end the game extremely quickly by destroying one of my Panther Platoons.
I forgot to take a picture of the whole board but the objectives were evenly spread. The one on my left was behind a hill and opposite was Trev's objective also behind a hill. There was a line of hills along the edge of the table and between the two objectives was a large wood. On my right, my objective was buried in a wood, whilst the objective opposite was in a corn field. I deployed a Panther platoon and my 1iC on my left objective and a platoon of Gebirgsjaeger in the woods on my right. Trev placed one of his infantry hordes and the rocket launchers near the objective behind the hill and the HMGs and Mortars in the cornfield. Trev got the first turn and I braced myself for impact. 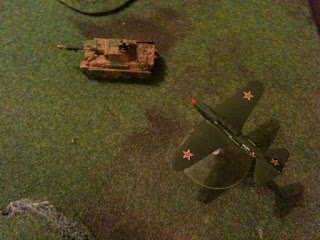 As expected, Trev's Sturmoviks began to target my Panthers. However a combination of spreading out the tanks and spectacularly poor dice rolling for arriving and armour penetration, the Russian Air Force were only able to bail two tanks during the course of the entire game. 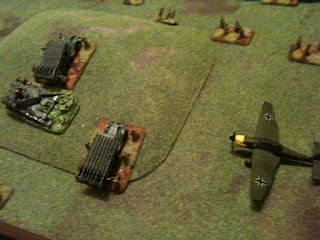 In reply, my own sporadic air cover was much more effective, accounting for almost all of the Katyusha Rocket Launchers after a series of sorties. The Luftwaffe were helped in their mission by the Russians' complete inability to dig in. This also had the added effect of seriously reducing the impact of the Russian artillery. 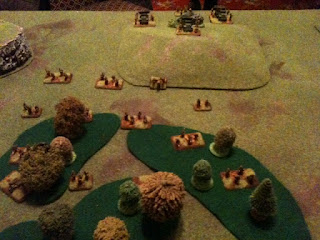 Meanwhile the Russian Infantry scurried towards the woods between the lines on my left flank and loitered there, pinning my tanks in place. I couldn't get too close as I was concerned about being assaulted and so couldn't make use of my machine guns. I figure that Trev was equally concerned about leaving cover in the face of my MG's and seemed to be waiting for support. 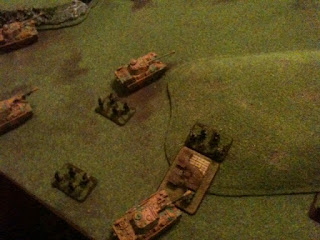 The nature of the random reserves meant that I was the one to receive support and my second unit of Gebirgsjager moved to back up the Panthers and so the Russian advance ground to a halt. This flank bogged down into a wary stalemate for much of the game. 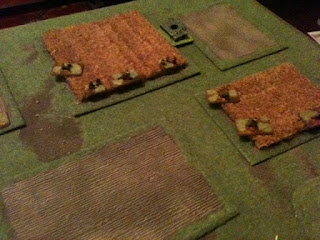 Meanwhile, on the right, the arrival of my second unit of Panthers made the Russian HMG's and Mortars in the corn fields look distinctly vulnerable. I was considering making a death or glory assault to capture the objective... 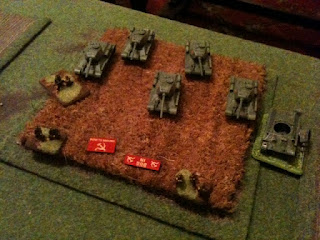 ...that was until the Russian armour turned up. Close up, the T-34s are more than capable of flanking and hurting my Panthers and so I was forced to rethink. 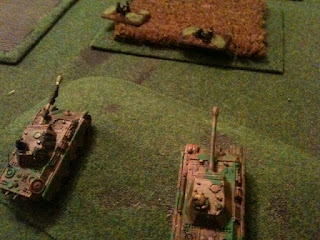 And so, using a small rise to give the big cats a bit of cover I began to fire away at the Russian tanks. As I said, close up, the T-34's can give the Panthers some trouble. However, at range... 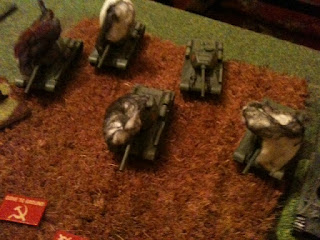 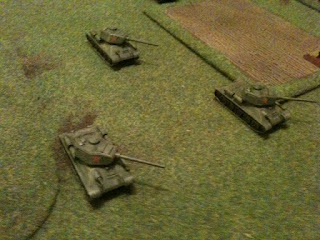 Despite the pounding the Panthers were giving Trev's armour, more and more Russians were arriving from reserve and although I'd so far inflicted more damage, I was unable to stop the second unit of T-34s from charging across the battlefield. 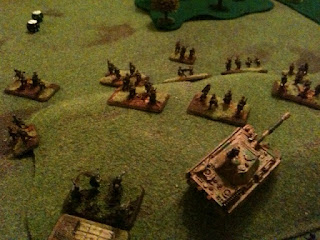 One of the reasons that I was unable to halt the T-34s was the fact that having secured the objective with infantry, I'd despatched the Panther platoon on my left on a daring mission (more on that later). This gave Trev the encouragement he needed to finally launch his infantry out of the woods towards my Gebirgsjager, who were supported by only my commander's Panther. 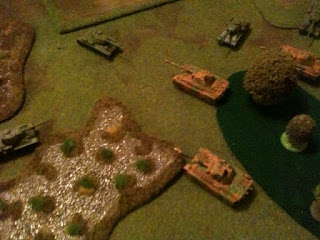 The advancing Russian tanks were able to surround my Panthers and began to make their numbers tell, one of the big cats was destroyed and the others were forced to withdraw. With my left objective under pressure from an infantry assault and the path open towards the objective on my right, things were looking ropey for the Wehrmacht. 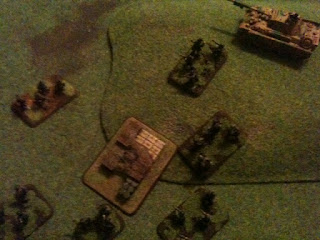 That was until, the commander's machine guns provided more than adequate support my dug in infantry in fighting off the Russians and the T-34s were suddenly called back to deal with an emergency behind their lines. 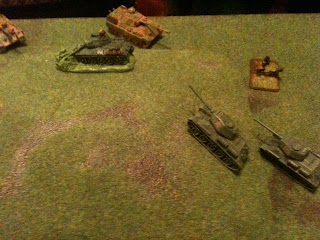 Remember that unit of Panthers I sent off on a daring mission? I'd sent them on an end run behind the hill line on the left of the table. With the infantry caught in the woods in the centre, all that Trev had to defend against them was a small unit of anti-tank guns who were dealt with in short order. It was this move that forced Trev to be more aggressive with his infantry and then later to pull back his T-34s.
I captured the objective and Trev desperately threw everything he could at them. The Panthers heroically weathered the storm and then blew away the T-34's contesting the objective to win the game.

I was really pleased with how this game played out. I was helped by Trev's dismal artillery and air support, but I'm happy that I recognised the opportunity to send the Panthers rushing to capture an objective. I'm often too cautious with my tanks, however this is because I tend to get punished badly when I'm more aggressive. I do feel that had Trev been more aggressive early on (his infantry was far more scared of my Panthers than it should be) then the game would have gone his way. As it was, I was able to do what Panthers do best, whittle away his armoured support at range and so reduce his ability to move quickly to respond to my attack.
A good game.
Posted by Kieron at 07:07