Still Not Grown Up

It was my birthday on Saturday (yay me!) and so I’ve had the first significant influx of new models for a while. So far the intake is as follows: Northern Fury (Saga Expansion), 2 boxes of plastic Norman Knights, 1 box of plastic Sherman tanks, 1 artillery template for Flames of War, 1 pin vice. I’ve also got a decent fighting fund for further purchases, although most of this will wait until Triples. 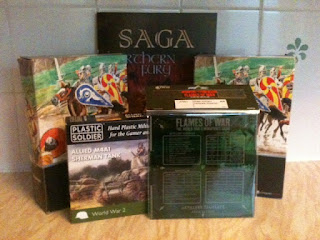 This birthday was well and truly cheaphammered. Whether it was rigourously planning what I asked for; picking up deals on specific days when I got a bigger discount; considering units that can be used both Mid and Late War in FoW; or begging for javelins to convert the Normans into Bretons, you can rest assured that being another year older, has not made me any more profligate in my spending.


Projects for this year include:
Whether I'll get all of this done is anybody's guess. The list will also grow and change as I get tempted by new projects (Muskets & Tomahawks is already calling).