The Boys with the Black Stuff

It's been about six months since I last played Saga, largely because the run up to the 'Winter is Coming' tournament saw me play a lot of games in a very short period and gain a few fatigue points, but also because I've been running and failing to win the club's Blood Bowl tournament. However, with a club campaign just about to kick off and the 'Spring Tide' event a couple of weeks away, I thought that it might be a good idea to remind myself of the rules.
This 6 point game featured my Vikings against my Dad's Irish...I know there isn't an Irish faction (yet, hint hint Mr Tomahawk and Mr Beast) but when he considered what Dark Age force he wanted to build, my Dad was adamant about doing Irish/Hiberno Norse. Depending on force composition he can use the rules for either the Welsh or the Vikings. For this game he was being a bit Welsh.
The Vikings - 1 Warlord, 4 Berserkers, 2 units of 6 Hirdmen, 2 units of 8 Bondi
The 'Irish' - 1 Warlord, 3 units of 4 Teulu, 3 units of 8 Priodaur (all on foot) 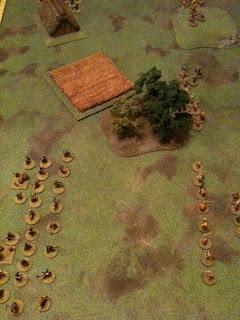 We rolled up the 'Escort' scenario and I chose to be the attacker, trying to get the baggage (in this case a load of barrels, probably full of Guinness) off the opposite table edge, and the Irish would be trying to stop me. As you can see from above, I put the majority of my force on my right flank with two of the baggage markers, and I put the other one far over on the left (behind the house) guarded by a single unit of Bondi.
My goal was to draw enemy forces over to the left by sacrificing one of the baggage pieces and so make it easier for my main force to burst through with the rest of my force. The downside of this plan is that I had to get both of the other baggage pieces off the table to win, I couldn't afford to lose one, so I'd have to be careful.
To my delight, my dad placed a unit of Priodaur and a unit of Teulu over on my left, pretty much guaranteeing that I'd lose the Bondi and the baggage, but also assigning two points of his warband to deal with just one point of mine. I would not even try to activate the unit on the left with the aim of making them last longer and so tie up the enemy units for more of the game. 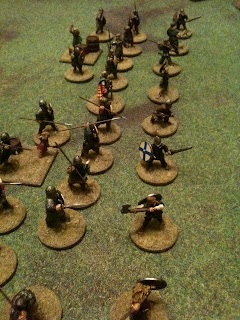 My 5 points of Viking filth were massed and ready to run. The strategy on this flank was to pile forwards, use the Bondi to screen the Warlord, baggage and Hirdmen from the enemy javelins and then launch the Berserkers to punch a hole in the enemy line for my elites hearthguard to surge through. 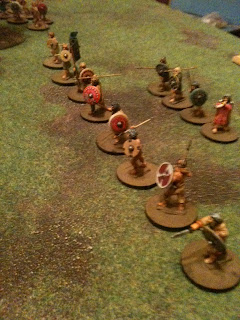 Opposing my main force were eight Priodaur and four Teulu. This was certainly beatable. However, the worrying part for me was the mass of Priodaur and Teulu, led by the Warlord, behind the woods in the centre. If I took too long trying to clear the screen in front, they'd be on me. Also, I was concerned with the Welsh abilities that slow you down, draw units out of position and allow Welsh units to back off; in short all the abilities that would slow down my surge and allow the Welsh Warlord to close. 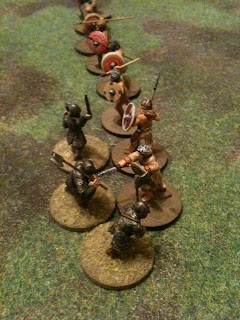 The opening of the game went to plan. My main force advanced and the left stayed still. The Irish line threw Javelins and took down a Bondi, but didn't have the abilities ready to stop the Berserkers making contact (I should point out that I use models with Dane Axes as my Berserkers) and making a mess of the Priodaur. I was also surprised that one of the Berserkers survived the encounter. 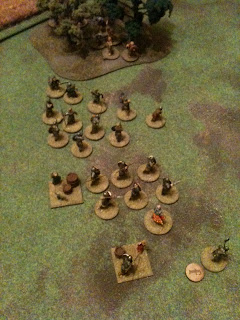 With only four Teulu in front of me I advanced again and moved the Bondi and one unit of Hirdmen to intercept any rush by the Welsh Warlord, who'd been sneaking through the undergrowth using Children of the Land. 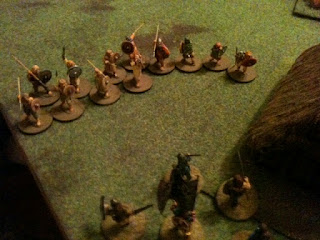 Meanwhile, over on the left, the bait was well and truly taken as the Irish advanced on my Bondi and threw Javelins at them. 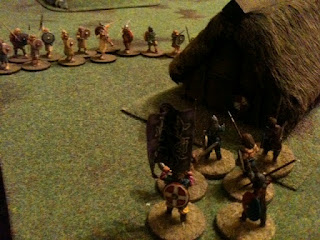 The Irish seemed reluctant to close, the Bondi backed off to reduce the damage they were taking from the Javelins. They were eventually caught and killed but the baggage was still at liberty when the game ended. 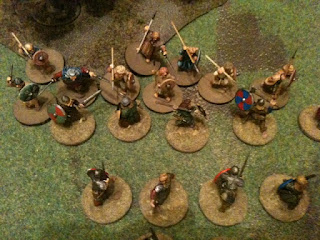 Back over on the right, the Irish Warlord gave a cry of "With me! For the craic!" and charged with his Priodaur into my understrength Bondi. The fight was short and brutal, largely because the Irish were using Strength in Numbers to beef up their attack, and the Bondi were all killed for the loss of only a single Priodaur.
With four Teulu still blocking the road to freedom, a unit of Hirdmen went barrelling into them, using Valhalla to cut them down to a man. However, the Irish gave good account of themselves and when the dust cleared, nobody was left standing. 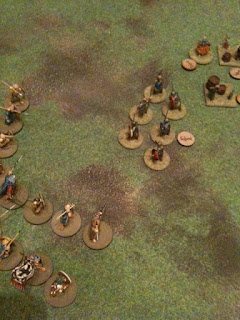 The route home was clear, but the Irish Warlord was bearing down on the remnants of my warband (where had they all gone) who were all fatigued. However, a fortunate set of Saga dice saw my Warlord use Njord to clear the fatigue and then simple activations to move the the baggage off the table. Not very glorious or heroic, but hey, who's got the beer?
This was a good game which ended up closer than it should have, but I'm troubled by the Escort scenario. It seems a bit predictable and 'gamey'. After all, in the situation above, the Irish still had over half their warband and I had only my Warlord and six Hirdmen. Unless my camp is immediately off table (in which case, it's an odd place for the Irish to attack) it seems that the Irish would simply harry the remaining Vikings to their death. Also, having three baggage pieces seems to scream for the dummy play and the game ends up feeling like Blood Bowl. Personally I wonder whether having a single, larger piece of baggage would make for a more 'historical' game.
Posted by Kieron at 11:54