Just to prove that I am making some progress, I thought I'd post about some rather uninteresting wargaming tasks I've been getting done.

First up, a couple of bases for my woods. Simply done using the MDF from the drawers of some broken furniture, cut to shape, smoothed and sanded (this bit was done by Andy as being an impractical flounce of a teacher I don't own tools) then a liberal coat of PVA, sand, brown paint and finally flock. It's not going to win any prizes but it's better than bits of carpet or cloth. 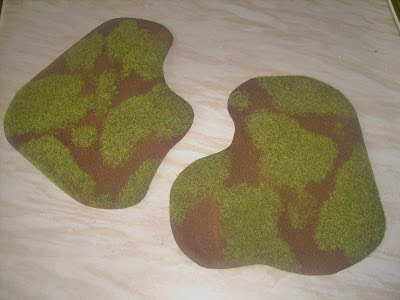 Next up, my Saga measuring sticks and counters. Andy had these made for everyone taking part in the club campaign and I need to make mine a little bit different to differentiate them. However, I quite liked the look of the laser cut MDF, so I've just gone for a simple wash of brown ink to make them a bit darker. I may do more to them in time but for now it's enough to avoid confusion. 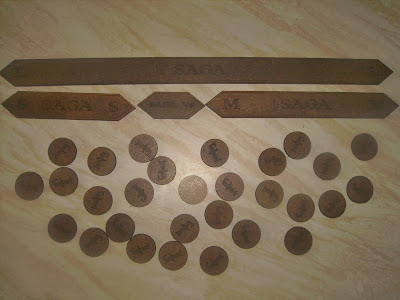 The question is though, why am I doing this dull stuff rather than painting models? The answer: I'm out of models.

Seriously...well almost. My lead and plastic slag heap has diminished to such an extent that all I have left to complete are 5 Questing Knights, 4 Knights Errant and a Hippogriff Rider for my Bretonnian army and 8 Chaps with Shotguns for VBCW. And that's it. As neither of these games are my focus at the moment, I'm not really motivated to get them done for now. However, the next time Matt challenges me to a VBCW game or as soon as Aneurin's WFB campaign kicks off, that will change.

Admittedly there's a couple of clean up jobs I need to do on a couple of my armies (my Wood Elves need fixing still) but I began this blog with the aim of reducing the slag heap and it's worked.

However, my birthday is at the end of the month and I already know that there are at least thirty cavalry models incoming, so there'll be plenty to do in the coming year.
Posted by Kieron at 04:11