A bit more Flames of War painting done. This time it's just a few bits and bobs to finish off my unpainted Flames of War stuff. Two objectives, a transport team and an observer team.

First up is one of the objectives. I got the makings of this in a pack with the motorbikes I turned into the Recce Platoon. It wasn't an official pack, it was one of those odd little collections you can sometimes find in independent games shops. So, I go a Recce Platoon and the bits for this objective; a German roadblock. It also adds a little spot of colour to the often earth-toned Flames of War battlefield. Next, a destroyed allied tank. I think it's a Sherman, but don't quote me. I've had this painted for a while and just needed to do the base. I also holds position as the first resin model I ever painted. 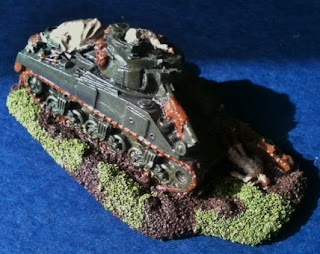 And here's the second, a Horsch Kfz 15 Field Car. I've painted this because they're often a requirement to field Panzergrenadier HQ (along with one of my motorbikes). It also serves as encouragement to me to buy and paint some trucks so that I can eventually field my Germans as Wehrmacht Panzergrenadiers rather than SS Panzergrenadiers. There are two reasons for this, firstly, as you can see, my paint scheme isn't right for the SS, but more importantly, I just don't feel right about using the SS. I used them last night to meet the points requirement of the game (SS are pricey and I don't have a lot of stuff) but something sits a bit wrong about trying to make the SS win. 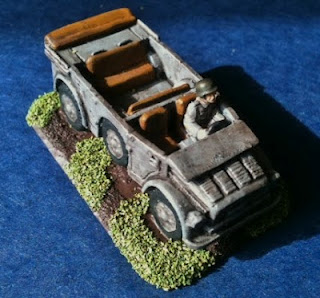 As to the game last night, I forgot to take any pictures, but the aforementioned SS Panzergrenadiers took on a British Tank company played by Andy, who's as unfamiliar with the rules as me. There was much flicking through the rulebook, especially as there were whole parts of the game, such as artillery, I'd never used before. We played the Encounter mission and I think I deployed the wrong platoons to begin with. My Mortars and HMG nests were completely useless against British armour and I was worried about being steamrollered before my reserves turned up. Meanwhile Andy, who had not played with the British before, was advised to sit back and soften me up first. Left to his own devices he probably would have been more proactive and pummelled me. As it was, his artillery and tanks pounded my dug in line, and tried to stay out of range sight of my PAK 40's.
It was slow going, but I was being whittled down and was struggling to do anything (I was also completely forgetting my Stormtrooper move). However, no reserves were forthcoming and on my turn 5 I decided to be a bit brave and get my Pioneers out of their foxholes to go after the Observer tank that was alone but allowing Andy to rain artillery fire down on all my units. I couldn't reach it that turn but if I could at least drive the thing off, I could dig in again. My PAK 40's had been duelling with two Cromwell tanks, but had only managed to bail them (which wasn't too bad as Andy's force was Reluctant Veteran.
Andy's turn 6, and still no reserves, but predictably, the vulnerable Pioneers were shelled and machine-gunned, however a series of infantry save meant that losses were minimal. Also the Observer Tank hadn't retreated, so I could try to nail it next turn. Andy remounted one of his two Cromwells and the rest of his tanks pushed through the trees to start a heavier bombardment of my Mortars and HMG nests, one of which was destroyed. I really needed reserves, Andy was sure to get his next turn and he would then easily overrun my line.
My turn 6 and...the reserves turned up! Two platoons of them.
First, a platoon of Panzergrenadiers arrived to support the Pioneers and free them up to attack the Observer Tank and possibly push on the capture an objective. Second, and more importantly, my three Fearless Veteran Panthers arrived (I should have had them on from the beginning instead of the Mortars). As well as getting reserves, my luck was in as my dice decided to be friendly on this key turn. The Panthers destroyed Andy's AA tank, demonstrating that there was nothing in the British Tank Company that could withstand their guns. The PAK 40's began to pull their weight and destroyed the two Cromwell's they'd been duelling with, and the Pioneers advanced on the Observer Tank and shoved a panzerfaust up its spout.
With my heavy tanks on the board and his tanks nowhere near their objectives, Andy knew that he would be forced to run and hide from the advancing Panthers. Also my Pioneers had a clear run at capturing an objective. Even if he got some reserves, Andy was sure that the tide had turned. It was also getting late, so Andy conceded and withdrew.
Hooray for the SS! (See what I mean about that being wrong?)
Overall this was a great learning game for both of us as usually I play people who know the rules much better than me and get told at different points through the game why I'm losing. Last night, however, we had to do more digging in the rules and learned more. I found out about artillery and that my Mortars are NOT a threat to tanks, I'm also coming to appreciate my Panthers much more. In support of infantry they are a devastating threat and a psychological weapon as the infantry take away many of the Panthers' weaknesses and allow them to do what they do best, pop tanks.
Andy's been working on a Mid-War DAK Panzer Company and I think he learned to trust his own instincts as a tank commander. I'd expect him to be a bit more freewheeling and aggressive, 'Rommelesque' you could say, when he finally rolls them out.
Posted by Kieron at 02:55