I Believe in Harvey Dent

There's a new face in town. 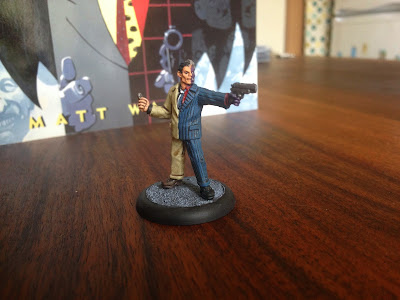 Two-Face has always been one if my favourite Batman villains, even though the crimes themed to the number 2, are a bit crap (pun intended). His origin story is one of the most interesting, especially as told in The Long Halloween.

The miniature is another Heroclix model, and one if the better sculpts. It was also a doddle to paint as it had a pretty decent paint job already and just needed touching up here and there before being given a was.

I've held off 'painting' Harvey for some time as I didn't have a gang for him. However, when I recently ordered Poison Ivy, I took the opportunity to get a couple of henchmen for the Two-Face gang. 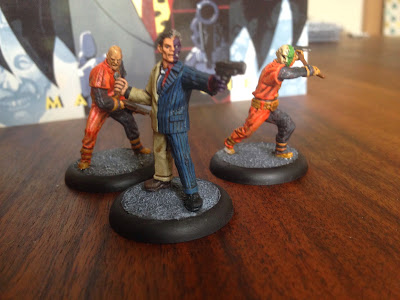 I went for an orange and black colour scheme as I'm beginning to like the running theme of orange jumpsuits running through most of the henchmen (and some of the Free Agents) I'm painting. It means that the ubiquitous Blackgate Prisoners gel well with whichever gang they're attached to, but the little differences, Two-Face's half and half design or Joker's clown masks, provide enough difference for easy distinction on the tabletop. 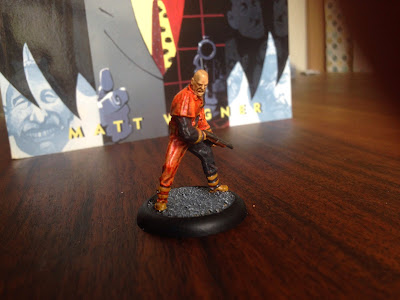 Although I'm really happy with how their uniforms turned out, I have to admit that I didn't particularly enjoy painting the guy wit the axe. 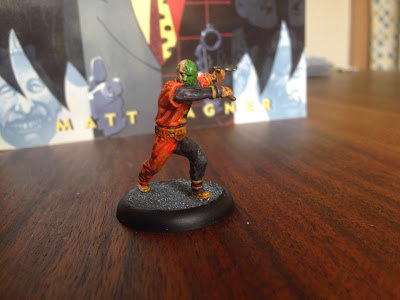 The rubber mask he's wearing prevented me from really being satisfied with the face. I don't like the look of the masks from the Arkham City game and now that  Knight Models are releasing Mobsters as alternative henchmen for Harv, I'm not sure whether to get more of the same or switch to Mobsters.

Further complicating matters is the fact that there isn't another pack of henchmen for Two-Face. If I stick with the prisoner style gang, I'll need to buy the starter pack, which will include another Harv. Hmmm...choices...

Anyway, I've also finished another three sewer entrances, bringing my total to six, which, barring special rules, is how many you need for a game. 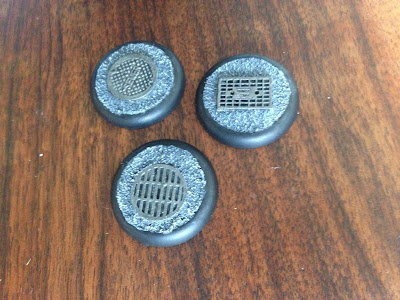 They're from Fenris Games. They do a set of Gotham Sewers, but they didn't have any at the Other Partizan show, so I bought a mixed set. This hassle the rather dull job of painting them at least a little varied.