Zomtober Reborn (on a Monday)

It's that time of year again, when the noxious undead claw and clamber their way out of lead piles across the globe and shamble into the pale light of the blogosphere.

The basics are this:
Paint some zombies or survivors each week of Zomtober.
Post them on your blog before the Sunday of each week.

Last year I mainly focused on Zombies, getting a starter horde of roughly two dozen done. This year, I have a plan to build some themed survivors from the Wargames Factory boxes, although some additional shamblers may make an appearance.

However, to kick things off and round off my recent spate of Batman related gubbins, I present my pre-Zomtober offering of: Solomon Grundy! 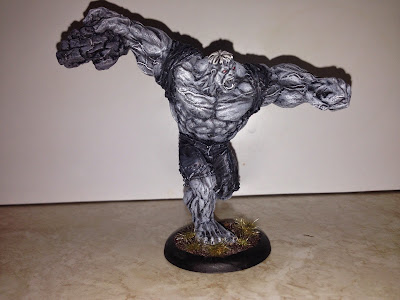 Yes, I'm aware that it's actually the Hulk miniature from Knight Models, but I've been being creative.

I originally got this model for my birthday in April, and I was intending to use him as part of my Matvel project. However, this miniature is pretty big next to 35mm miniatures and just dwarfed my 28mm superheroes, so he never got painted.

I was intending to sell him to find the purchase of new Batman minis, but it occurred to me that with the right paint job he'd pass for Grundy. Admittedly his clothes are a bit more torn than most versions of Solomon Grundy, but I didn't have to search for long to find something to convince me that this would just end up looking like Grey Hulk... 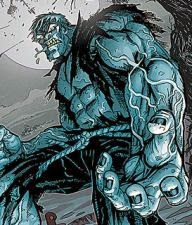 Despite his size, this model was really straightforward to paint and I'm really happy with the outcome. I still need to fill a decent sized gap under his left arm, and I think I want to do a little bit more work on a mould line over his shoulders, but I've impressed my self with the whole concept of this model.

So, Zomtober is up and running. Trying to get something done this week could actually be tricky, as I'm away most of the weekend, so I'll probably start small.

If you want to get involved in Zomtober, all you need to do is head over to Brummie's Wargaming Blog and sign up on this link: